Life in the USA in the 1930’s depression. My parents lived thru it with 3 children.  Families received little or no government assistance, unless you were fortunate to get on with the CCC or WPA which did not take affect until the mid 1930’s. These programs were sort of a work-fare situation where folks were paid to construct government projects, such as parks, dams, bridges, power plants and utilities installations (water/sewer lines in cities where they did not exist). 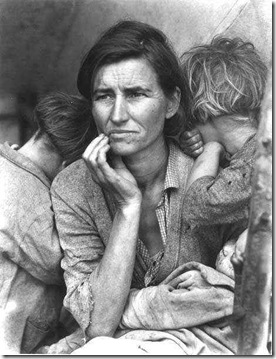 Dad told about driving a A-Model with tires so bad they used rags mud and weeds to keep them up because they would not hold air. He said they were fortunate to find any road kill because if a driver hit an animal and it was killed, the driver would stop and get it to cook and eat. 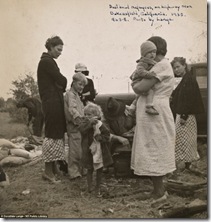 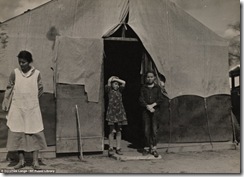 Men left their families, similar to the soldier , to find work at a CCC or WPA camp. There they were housed in barracks and fed in communal mess halls. 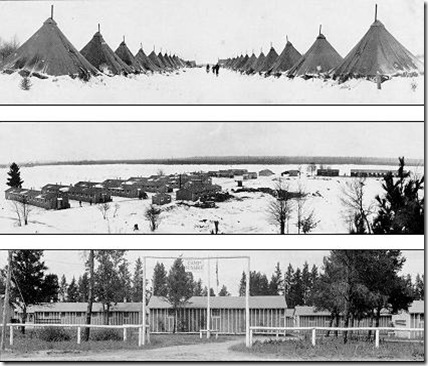 Those days will never happen again, because we as a nation have already given too much without any return to the able bodied citizens. It would be a great boon to our country if able bodied folk on government assistance would give a few hours a week back to the government. (NOTE: I SAID ABLE BODIED).

In the CCC.. The Youth’s pay of $30 a month, $25 went to their parents Implicitly, the CCC also led to a greater public awareness and appreciation of the outdoors and the nation's natural resources; and the continued need for a carefully planned, comprehensive national program for the protection and development of natural resources

During the time of the CCC, volunteers planted nearly 3 billion trees to help reforest America, constructed more than 800 parks nationwide and upgraded most state parks, updated forest fire fighting methods, and built a network of service buildings and public roadways in remote areas

Lots of jokes were told about WPA projects. I remember my daddy talking about a man complaining to the boss that he didn’t have a shovel to ‘lean on’.

The Blue ridge Parkway benefited from CCC/WPA work. According to a Robert Novak , the stone work was completed during the Great Depression under the Works Progress Administration (WPA). According to Wikipedia, WPA projects included the construction of 650,000 miles of roads, 78,000 bridges, 125,000 buildings, and 700 miles of airport runways, as well as other projects. 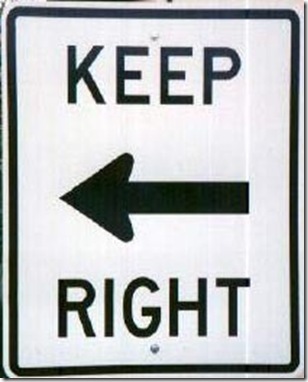 If someone had the ability to sell this type of project today, the country would benefit from some government money spent , instead of feeding it to Corporations that are to big to fail, or able bodied folk who want a handout.

To succeed, you must first want to. 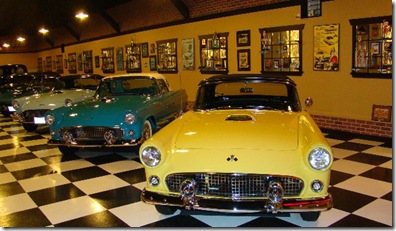 I agree with you, Jack. It would be nice to have such a program to get people out there working who are able to work and to get out there to get some of the work that needs to be done on streets, parks, etc. But if it will happen, not sure about that.

My mom was born in 1921 so she remembered the depression well. She came from a family of 10 siblings, but she was the youngest, so several brothers/sisters would have been out of the house by the time the depression "hit". Her family weathered it as well as could be expected. They didn't have much, but always had what they needed. I do remember her saying her mother would give something to eat to anyone who came and knocked at the door. Perhaps that's why they always had what they needed because she was willing to share it with others. I'm sure she wasn't the only one that did such a thing too.

foggy morning here in sunny California; going to head out to church soon :)

My parents grew up in the great depression and I heard many tales over the years of how hard the struggle was for their families to live during those times. World War II had started by the time I was born and things changed very fast for everyone. Jobs were suddenly available that hadn't been there before. Those that weren't fighting seemed to be working. My mom's family relocated for a while to work where the factories were. One thing about it is that things never stay the same and are always changing. We just have to adjust to them and do the best we can. We had our first snow fall yesterday. No accumulation, but brrrchill it surely did get cold.
Hope you all are enjoying some warm sunshine there!

We have many remnants of the CCC up here, logging camps long deserted, bunk houses in reforestation areas back in the woods, stone walls built by hand along river banks, and there are lots of houses, all identical built by the WPA along many streets in the city.
We are getting SNOW and Cold, don't know yet if we can get south for the winter.
Hope you 2 are doing OK,
Love from the Frozen North Country !!!
Gary an Anna Mae

First, let me say my prayers for ol' Charlie's family. He sounds like he was a wonderful example of how folks should be.
Our folks knew what the depression was as kids. I remember Dad talking about the Conservation Corps, and the guys he knew that worked with them for months on end. It was a good thing that was done. (He was one of the lucky ones that got into the paper mill early on.) We do need the same thing again, to fix what has worn with time, but there just aren't many out there that would work for minimum pay anymore, let alone a meal and a shower. It's a sad country we now live in. When will the unworthy, but able, learn that it's not the dollars but the satisfaction and heart that counts. I'm just so glad my kids all have satisfaction and appreciation in their jobs. They are all healthy and have roofs over their heads. That's more than too many.
BlessingsMyFriends

Yes.
She surely is a role model of photographer for me. Nevertheless, one fears from time to time, that alike images might re-appear.

Our renter lady came today to pay the rent with a check from who else but The Morman church. Both he and she look very able bodied and there are signs everywhere wanting oil field truck drivers. I don't understand!

I have seen those pictures before and it sure looks like it was so hard for them. My parents and in-laws went through the great depression. It changed their lives and personalities. I agree with you totally. sandie

I'd love to see every American serve two years in national service. Even those with weak bodies have some talent to give.