Charlie was different. Charlie always worked. He supported himself. His jobs were mostly minimum wage with no benefits, but a happier man you will never see.  I do not remember Charlie having an automobile, he walked where he went.

His last job was at the Dairy Queen. The fill in man or Go-fer. He cleaned tables, emptied trash and cleaned the floors.

Kept the cooks supplied from the freezer. When we went in he would always hug Sherry. Always waiting for me to yell. I never disappointed him. “All right Charlie, get your own girl!” He would burst out laughing.  In church it was the same.

He always took time to stop by our table to give us the latest on his family.  When we are in Belmont, we attended the same church. He had been sickly lately. Sherry always enjoyed giving him a present when he was in need.  We were blessed to know Charlie. He never had a bad word about anyone.

Shirl called Sherry a couple nights ago, Charlie was hit by a car as he was crossing a very busy street, one he had crossed hundreds of times.

He has a couple brothers and a sister. The brother from Georgia drove up to see Charlie in the hospital, he had a heart attack and died before he got to see Charlie. His other brother is a friend of mine, Jerry. Jerry was in the concrete business, he  poured and finished a lot of concrete for me. He has just found out that he has a tumor that is inoperable. All these guys are younger than I.

Shirl just e-mailed me awhile ago, Charlie did not make it. He passed last night. Shirl met Charlie, she would give him a ride home from Wal-Mart or the drug store, where ever they met.

The weight of the arrangements will be on his Sister I am sure. She has a heavy load.

There are folks you will will always remember. Do you recall Charlie Gordon in ‘Flowers for Algernon’? Our Charlie was not mentally challenged, but he was ‘cheerfully’ different.

We will miss him. The old adage, ‘Time goes on’ is so true.  You have probably known a Charlie. Someone who would not hurt a flea.

I will miss yelling so everyone in the store or church can hear, “Get you own girl Charlie!”

Rest in Peace my friend,

Everyone leaves a something when they pass,  some leave much bigger tracks.

On the road coming down to Florida… 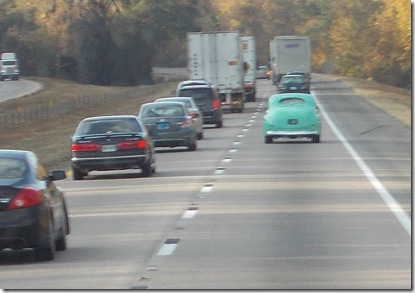 My joy driving on our highways is seeing the classics. the green is a ‘46 ford chopped and channeled. Sorry to hear of the passing of a good man...

Charlie sounded like a great man! Thanks for sharing him with us; I know he will be missed!

Rest in peace Charlie. What a wonderful tribute .

I am sorry, but Charlie sounds different in a very delightful way. Good tribute. ~Mary

Yes, I knew a Charlie who was a dishwasher at a place I worked. He was quite a character. He could be temperamental but if we got low on silverware, I would go back and cajole him into getting some done quickly. Must go for now. Hope you and Sherry had a good Thanksgiving in what ever way you wanted it to be.

I've known a "Charlie" or two during my lifetime...unique people who seemed more tuned in to life than the rest of us! How blessed you were to know this Charlie...so tragic about him and his brothers.

The car photos are excellent, thanks for sharing!

The love towards him surely will negate time and distance. A very fine tribute indeed.

Sorry to read of this passing. We had a couple of Charlie's in our town. I'll bet he loved you, Sherry, and Shirl and you made his life happier.

Such a sad thing about Charlie and his family. Prayers for his brother and sister. Take care, Sheila

When I would see Charlie I
always took him home. Once was
to meet his Brother at Arby's.
Took him by Food Lion let him
get his groceries. He wanted
a shamrock plant came by the house
got him a plant and then took him
home. He was always happy.
REST IN PEACE CHARLIE.

Condolences in the loss of your Charlie. I've know some "Charlie's" but only a few. I had to read a little extra this morning...been too busy deer hunting. You always write right. Ain't that right? Altho you had me wondering as you told Shirl's story about the cowboy who wouldn't/couldn't move! hhaahaha. Good one, Shirl!