In unpacking and filling up our storage building I ran across this tag: 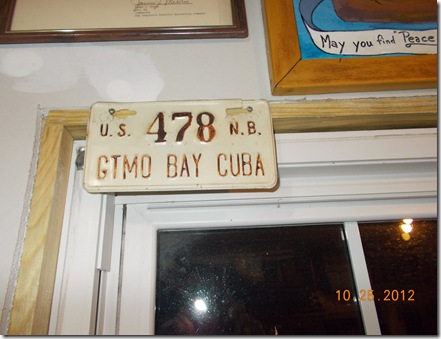 Brings back a lot of memories.

Guantanamo Bay, Cuba is the USN’s largest training base on the East Coast. The Bas is about 40 square miles, most of that is water I think.

All Ships on the East Coast go to GITMO as it is ‘lovingly called’ after a  period in the Yards (short for shipyards). Or if a ship is new. Gitmo is the home of the Training group that grades and judges whether a ship is sea worthy. It is called REFTRA (refresher training).

My first experience there was on the USS Independence. We were there for refresher training. Every morning the Inspectors would board the ship and we would get underway. All day was drills, sea trials. Simulated fires, man over board, explosions in the engine room. Always there were submarines (ours) running tests also and fake attacks.

It was a strenuous 2-3 weeks. During that time some nites and weekends the sailors also get liberty in GITMO. There is nothing to do onboard GITMO except go to the clubs and get a meal and drink.  The weather is nice and the sailors get a chance to unwind and see some Gila Monsters.

Most men dreaded the place. GITMO is a despised name among sailors. ME? What I saw was families going to the exchange and commissary together. Living together while the tour of duty was considered SEA DUTY.

Every sailor had sea duty time and shore duty time. Of course sea duty means separation from wife and family, so I see a chance to spend a sea tour actually ashore with my family.  Back aboard the ship, I told the old man I wanted to reenlist for my choice of duty, I wanted GITMO.

He laughed, are youserious? I said sure I will give the Navy 6 years more, if you will send me to GITMO.

He did, they did, and it was the best family time we had in our military life. We learned to bowl, square dance, snorkel and really fish.  The boys had little league and moto cross racing. A wonderful family time.

We as a family laugh when the Candidate Obama kept saying I will close GITMO, we knew it was just a prison he was talking about closing not GITMO itself.  It is too important to the USN to close.  More later.

By living on the Dreaded GITMO BAY, we learned that stories and fables can be wrong. For us it was a great place to live, to others it was a nasty word. 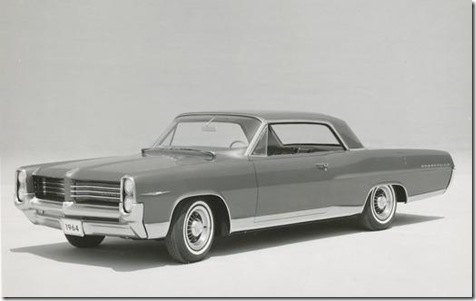 This is something like the pontiac Bonneville we took to GITMO. It is probably still there and running, by now it is a GITMOBILE!

So happy you got to GITMO family time while stationed there. You have made a good lot of special memories for your family. Proud to knowya!
I love reading what you write.
Hug sweet Sherry for me. I miss her.
BlessYourHearts

And here I thought you slept in. lol Love for way up here where it's getting cold. Tootle-doo
Blessings

It's nice to see the other side of things. I believe in order to make decisions we always have to hear both sides of the story and even then it isn't always the whole truth of the matter. You have a storage space just packed with memories there....most of them good ones. Hope your Friday is a fantastic one!

Thanks for sharing this, Jack. I really didn't know what happened in GITMO military wise, etc. I think it could be a good place to spend the time that you did and you certainly have fond memories of it!

Wow, that was an amazing interesting story. I always gain more knowledge everytime you post a new entry!

Interesting! Isn't that the way it is how different people love a place and someone else would hate it. Lynda my oldest tells me she would be depressed all time if she lived out here and I love it.

That is what I love about coming here - your stories. I always learn something. I have to admit to you - I had heard the term - but knew nothing about it. Thanks. sandie

It's sad to me that the meanings of terms like "Gitmo" and "God" can be so twisted.

Yeah, GITMO family time. How 'bout that Wisconsin insight? I loved the sailor's life - except for "isolated duty" time which I spent a year of in Adak, AK. You were wise to choose your assignment with family in mind.

Great mean to measure time and life.
Yes, family is probably the most important.
Please have you all a good weekend.

I remember you telling about your
time together. If I remember
the boys won lot of trophies
from racing motor bikes. You all
had a good time while there.
Many famaily activities.

Just keep on putting those memories in print - I love hearing about you and your brides life.
'love & hugs from afar'

Interesting that Gitmo was considered Sea Duty, that would make it much more bearable.

I liked the story about your life in Gitmo. You have had so many things in your lives together, you and Sherry. I don't know how you remember them all but it is always interesting.