I mentioned ‘Gitmobiles’, that is the name given to the older cars still running down there. There was one technician from the Burroughs Corp who built his own car from parts from the dump. Like the Morgan car it had a wooden frame.

Of course no one drives without insurance. So insurance was $20 a year, I know, outrageous. I never saw an accident on Gitmo, speed limit was 20-25.

There was one stretch with a 35 mph limit. It was one mile long.  The base police ignored speeding there. So to keep our cars from too much carbon build up we would go there and open them up to 80-90mph for a few seconds.

Sherry got a job in an office on the piers, working with shipping and receiving household goods for all personnel arriving and leaving Gitmo.

I worked at the Naval Supply Depot in conjunction with dispersing. I ran payroll and made checks for all civilian and military personnel aboard Gitmo.

When I was there we still had about 90 Commuter personnel. They returned to their homes off base in Cuba every day. Their paved path was thru the largest active mine field in the world, the one that surrounded Gitmo. The Cuban authorities required them to run the entire distance, about a 1/4 mile. (there was no danger, as long as they stayed within the fenced path). The Cubans have a gate and the USN gate is manned by Marines.  I would guess by now there are no commuters. Castro would not allow any new hires aboard GITMO. 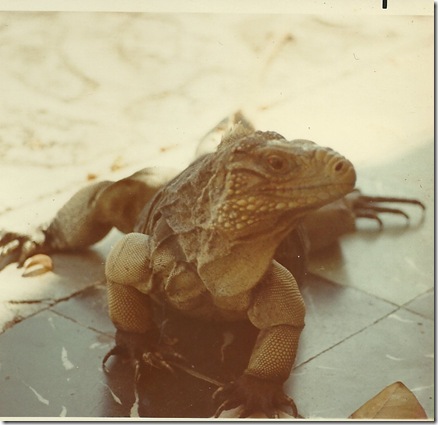 Iguanas were there, the top picture, the dude is about 4’ long.  Those are 1’ square tiles he is on. He is begging food at an our door club.

Lower picture taken near the beach (they grow up to 6’. One that size might scare me!) 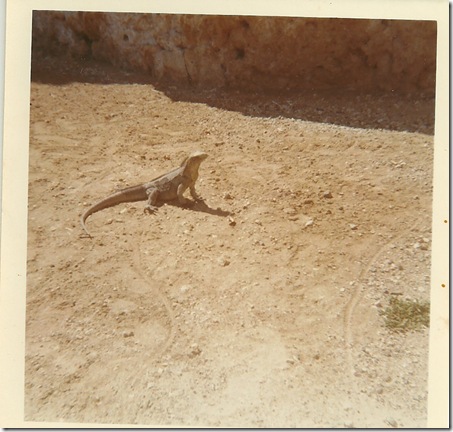 We had armed forces radio all the time and Armed Forces TV, from 10 in the morning until 11 at night. Everything was recorded, nothing live. Once, someone put together an hour of the most popular commercials in the USA, and played them. It was the most watched hour of TV. LOL

It must be nice down there now with Satellite TV & phones.  The only way we could call the states was thru Ham radio or MARS (Military Affiliated Radio). Did you ever get a phone patch from overseas? That would make an interesting entry.

Labor is supplied mostly by Jamaicans by contract.

We had a great chapel program for all faiths. A good hospital and school system for the kids. It was a small town atmosphere, we loved it.

Humans are unique in our mental make up, Some folks ask Why? Others ask Why not? 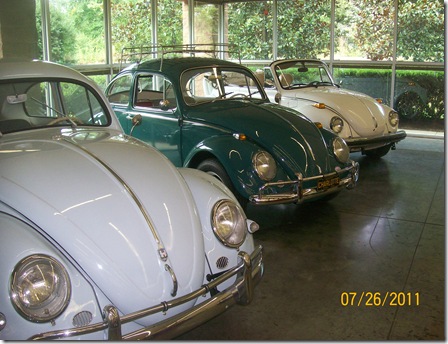 I can remember when this was the only foreign car commonly seen in the USA! The VW BUG!

I guess the VW is one of the very first foreign cars I ever saw. I never thought about it before. I always thought it would be fun to have one, but after I road in one once I changed my mind. It's no wonder you have great memories of your time there, small town atmospheres are wonderful. Hope you both have a great Monday,

That is the funniest thing about the hour of commercials! The thing that we run away from when they come on TV was enjoyed. But I guess if you don't see them for a bit it is neat to see what is being advertised in the states. Very interesting life you guys lived down there, Jack and Sherry. I have never lived anywhere other than the United States so it is always interesting to read about other countries and customs there and living as a military personnel there too.

Okay big Iguanas scare me! It would be so mice to go 25 mph and $20 car insurance wouldn't it? sandie