Alaska, Chicken, Tok and the Kenai

The top of the world highway is great. It is Canadian, we finally reached ALASKA.  We are sorta going in the back door instead of entering via the Alcan, but we planned to go back the ALCAN! 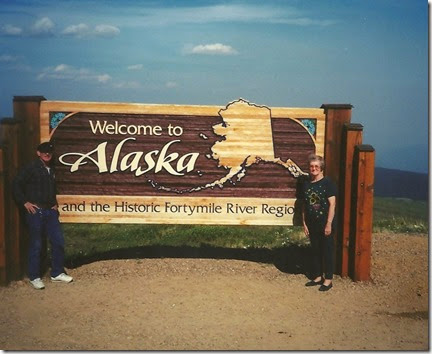 Okay, we are in Alaska. WE left the pavement in Canada, this is over a hundred miles of scrub board dirt road, but very wide. 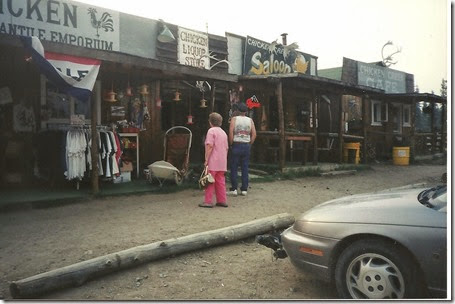 We reached our first town, Chicken Alaska, population 10, (winter 1). You are looking at the entire downtown.

(There is now one more store built in Chicken). 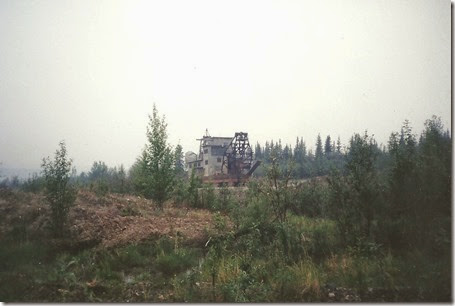 This is an abandoned gold dredge out behind the second store. Then on to Tok and to meet back up with the Alcan. 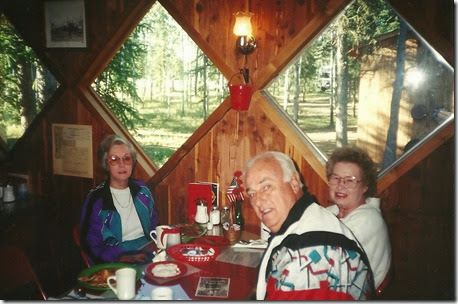 At Tok, we stayed at a very nice campground and had breakfast with them. We had Reindeer sausage, gravy and sourdough bread. (I had heartburn for 2 days!). We had a problem with mail here. so we waited an extra day. It still did not come and I asked the postmaster what to do. He said no problem I will forward it to the next stop. We picked it up in Palmer, no problem. 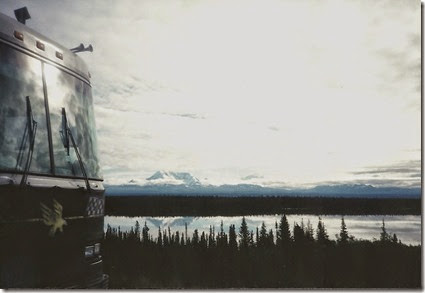 Everyway I turned, I wanted to take a picture. These shots on the way to Valdez. I cannot pass up a water fall. 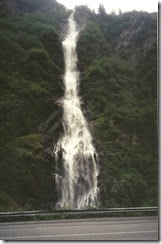 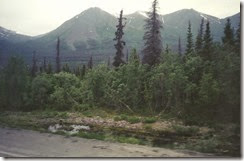 Dick was the sportsman, he wanted to fish. We saw a church where a few men were working on an addition. Dick walked down and asked where was a good place to fish.

He came back,”The pastor says he has a Salmon fisher guide and a man who has a pleasure boat and fishes for halibut, they would be glad to take us out.”

“In a couple days.” then he added, “ Jack they don’t have anyone to sheet the roof, can you do it with my help?”

We parked the coaches and drove the Saturn back to meet some great folks, and Dick got the plywood up to me and I cut and nailed it. It was a small addition 20x24.

Then Dick said, “Jack they don’t have a roofer in the church, think we can do it.?”

“SURE”, so the next day we roofed it.  I honestly enjoyed it.  During breaks we had some very interesting conversations. I had a ball. You can work all night up there. I told Sherry ‘I would work myself to death in the summer.’ 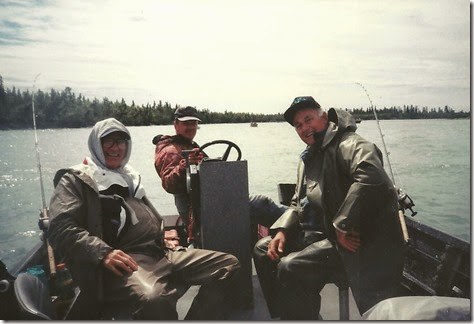 Fishing on the Kenai, I caught a 20lb King, the boat guy wanted to throw it back, but I threaten to break his arm. 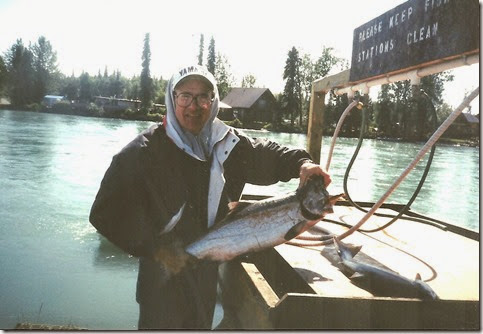 Dick caught a sockeye. Dick is also the fish cooker. He prepared the salmon that night. Everyone else raved about it, but I was disappointed. It didn’t taste like mama’s salmon out of the can!

WE went out the next day for Halibut and caught fish until we were tired. we only kept two fish (no room in the freezer). The owner kept the rest. We filled the diesel tanks on the way in. The owner would not take any pay. 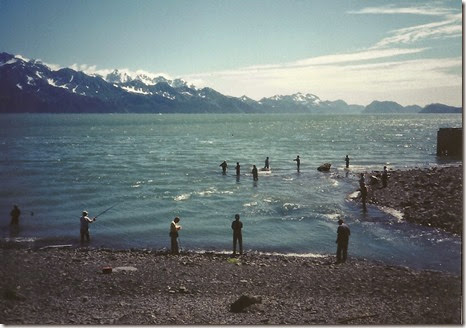 Mosquitoes are said to be the state bird. WE only had one bout with them in two months. 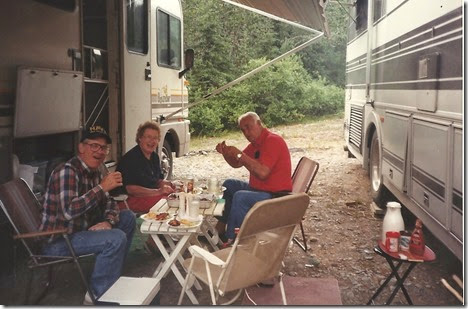 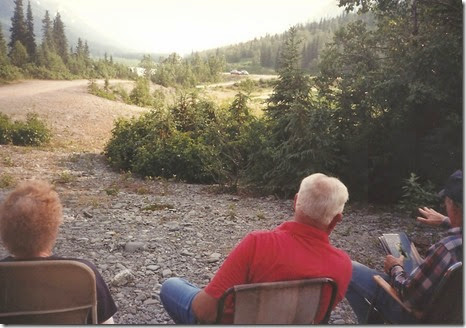 What a great life. We are camping in the boondocks here, the sights were out of this world, beautiful.

I will cut it down tomorrow.

Thanks for coming along with us. 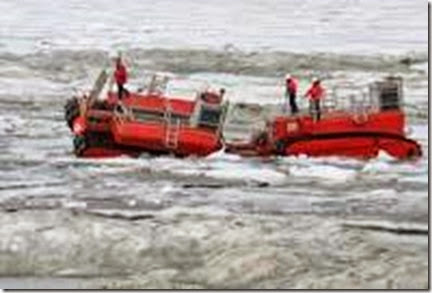 What a beautiful story and marvelous trip! You and Sherry are so blessed. My goodness, to be in the wild like that and not have the everyday hassles and noise around you would be perfect!
Oh the fish! Yum.....

I love that waterfall, a favorite of mine always and I am wishing I were there enjoying the natural beauty with you and yours. Blessings, Anne

How cool you were able to put your skills to work in Alaska and help with the roofing! That was mighty nice fish that was caught!!! Just for the fun of it, we have Nome Alaska on hubby's phone for weather; it is fun to see what the temperatures are during the different times of the year. Don't think I would want to live there in winter :)

Oh, what I wouldn't do to visit Chicken, Alaska! :)))
That's a pretty neat story how the would-be carpenters and your paths crossed. Tom was so disappointed not to have fresh salmon on our cruise -- not yet season, so they said. Your comment about the sockeye not tasting like momma's just cracks me up! (I only learned to like salmon after developing a shell-fish allergy 10 years ago.)

Sorry I was too pooped-tired to comment on the most charming Meester Jude Atticus. Love those chubby cheeks! I know you can't wait to get your hands on that boy!

I don't know where this came from.
I was checking new e-mails and
this pop up. Now I forgot what I
read on the blog. Oh just remember
Alaska with Dick & Kat. I sure
do miss them. I remember you
telling us about roofing a Church.
You guys have been everywhere and
enjoyed every minute. Maybe you
will soon come home where we need
you to fix things. hee hee

Waterfalls and fresh salmon. Sounds fantastic. All that gorgeous scenery too. What a wonderful trip.

There certainly isn't any comparison to salmon out of the can and fresh. I do like both. The pictures are just beautiful. Having good traveling companions like you have had do make all the difference. We had some good ones too. They got us camping and I never wanted to stop.