The great expanse of Age

Sherry and I make a yearly pilgrimage to Palm Beach County to pay homage a friend. This year it was her 95th Birthday. 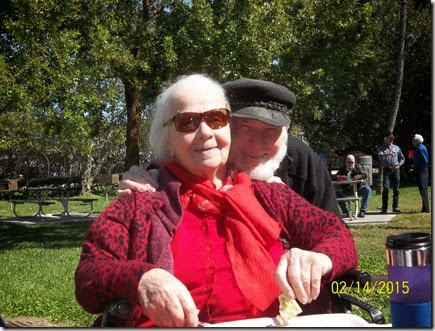 Irma Lee, became known as Nee because her first niece  called her Nee. She became known as ‘Aunt Nee’.  Our connection with Aunt Nee is very roundabout. When I was in the USAF we were stationed in Missouri and met the most amazing Missouri Farm Family while attending the same church. My favorite singer was the Matron of the clan, Eileen. She had a marvelous voice (still does). Eileen told us there were 3 sisters and they were a trio until she moved to Missouri, from Florida. One sister passed away, but the other, Irma Lee,  remained in Palm Beach County. She became very well known as a  Seamstress. Her clients ranged into the rich and famous, including the wife of Perry Como. 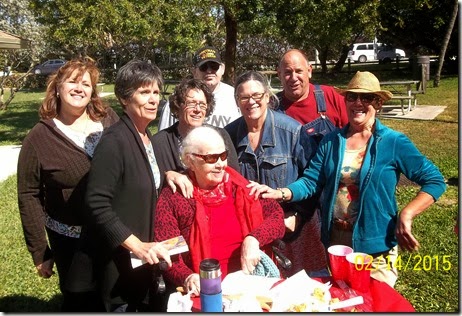 WE left Missouri and years later learned three of those Conrad kids, Glenda, Vickie and  David Luke had moved to Florida. So in Florida we again got together and in doing that, we met Aunt Nee. The very soul of Love and joy. Always a smile, So She became a part of our life.

Aunt Nee is such an integral part of this family, each year some of the family drive/fly in from Missouri for the Birthday.

Now, below is Holly (wife of David Luke) and her grand daughter Mia. Mia was the youngest attending. 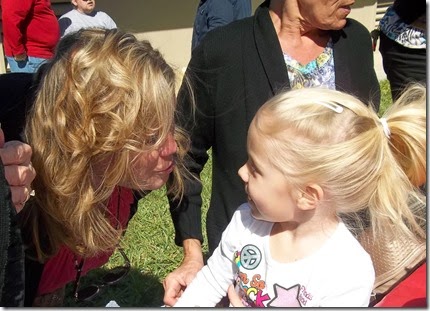 I stood around a lot, I cannot get involved, but I still observe, or people watch. I couldn’t help but see the carefree Mia, as she ran to the play ground. Once she stopped in her tracks, reached down and Plucked a small wild flower. She stood looking with childhood curiosity at the wonder of it.

I began to think what I was seeing. The exuberance of life, with literally millions of things to learn yet, undaunted, youth faces the challenge and handles life one thing at a time. 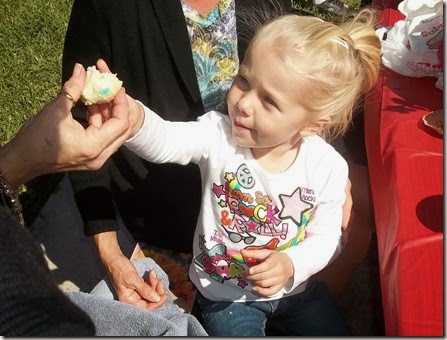 I saw Mia pick up a huge seagrape leaf from the lawn, carefully held it in both hands and studied it. She actually put it back on the grass tenderly.  I thought of youth tenderly handling age with respect.

That is what these nieces and nephews were doing with Aunt Nee, treating her with love and respect.

Aunt Nee never married, never had children. But every year she would sew her nieces dresses of the latest fashions for School and Spring. These Farm girls wore clothes that were made by the loving hands that created clothes for the rich and famous. Why wouldn’t you love someone who cared that much for you? 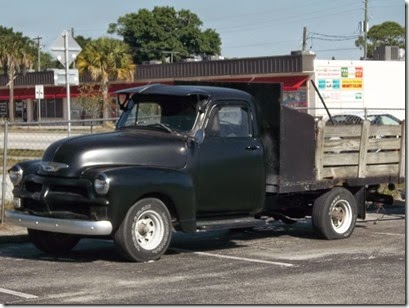 WE stopped for a Cuban sandwich in Indiantown, And I saw this ‘50’s Chevy truck

Aunt Nee sounds like quite the lady. And little Mia is as cute as they come.
A wonderful family, indeed.

You've some pretty special folk in your and Sherry's circle of friends ... and we're blessed to 'meet' them by association.

Have a wonderful day!

I loved your observations, Jack, comparing life through Aunt Nee and young Mia. What a special person Aunt Nee is to be so highly though of by so many who travel to come and celebrate her birthdays! Glad you and Sherry were part of it :)

So, here I am in tears for the second time today, You and Sherry are just awesome, Jack. Thank you!!! [the first was when I sat beside Taylor Benson, the guy with the Peruvian ministry.] As the music team came forward, I whispered, "wish we could hear "The Old Rugged Cross". The group began with a couple contemporary songs; beautifully done, then their leader said "Here's where we want full participation" and up on the screen came Lyrics to "The Old Rugged Cross", yep. I cried like a baby, thinking about my Mom joyfully singing that song. Aunt Nee, who played her accordion and sang in a trio with Mom and their cousin, can still do a remarkable tenor to that one! God answers spoken prayers. Love.you.two.

I remember you writing about Aunt
Nee every time she has a Birthday.
I'm sure she has seen many changes and could tell us a few things. I sure it is a wonderful family.

I thought of the song I sing when
you talked about Mia.."If I could
see the world through the eyes of
a Child what a wonderful world this
would be". 1958 Patsy Cline

Such a wonderful touching entry, enjoyed it so much. Finished your book "Mary Ann", it was your best I think.

How wonderful to be able at 99 to have so many family and friends around to celebrate with. Your observations were very touching . I just checked and it's a minus 9 here this morning.