North Carolina, the state of our birth and Home for most of our family

We had a lot of traffic yesterday. WE came thru all the speed traps on US301, we have never gotten a ticket there but have friends who have. 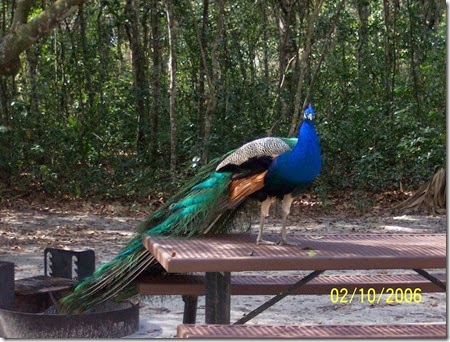 (Peacock pictures from Lake Apopka, Fl 2006 I loved seeing these birds all over the place and on our picnic table)

In Starke, FL something bad must have happened behind us because we met EVERY emergency in the town I am sure headed south. 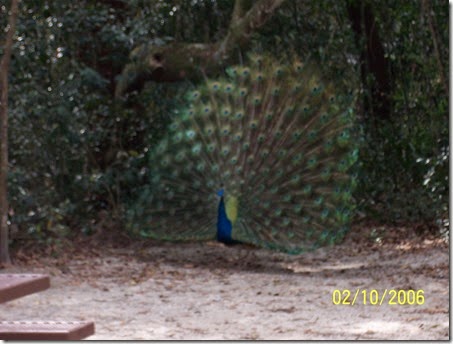 But my surprise was where US301 meets I-10 The line was backed up 2 miles. I passed on the right lane (It is a left turn to get on I-10) until I realized all those cars I had passed were waiting patiently in line saying bad words about folks like me who go to the head of the line.  You probably know what I mean. But I could do nothing but put on my turn signal and a nice guy let me in. I hate feeling bad like that, you cannot explain that to the guys you passed. 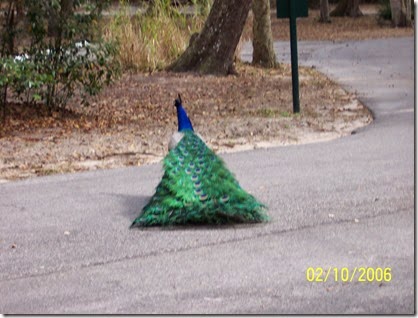 I believe I remember Myra in a blog entry, saying something like that, wanting to apologize for a blooper. 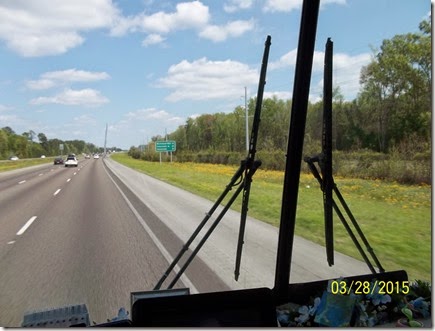 One bad wreck stopped traffic for awhile,we passed ant he cars were pretty badly damaged, we hoped no one was injured very badly. 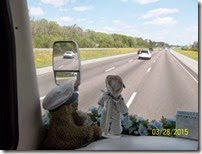 Spring was obvious in Georgia with the yellow wild flowers along the highway. 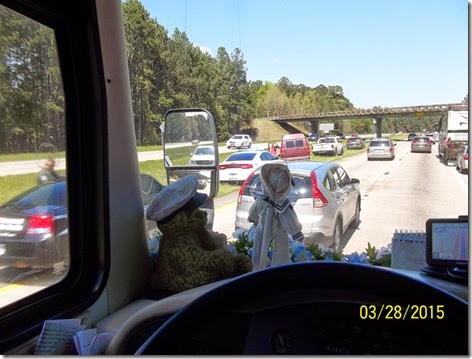 Then on I-95 around Savannah, GA the traffic again stopped, we saw no wreck but it looked like an arrest of some kind.

We made it to the RV park. Sherry heated left –over veggie beef soup.  She didn’t want to walk so I took off for a mile or so. These pretty flowers were all over the swamp I picked Sherry a bouquet.  I don’t know what they are but they are beautiful, wild flower of not. 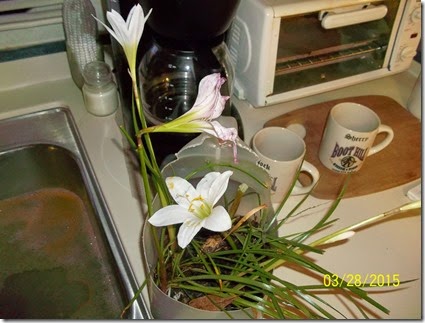 But for us it was a good days drive. It was good to be on the road.

Thanks for riding with us, It was only 6 hours, but nice.

I love the tidal streams and rivers that feed the Atlantic we cross on the East coast. Maybe we did not pass Spring. 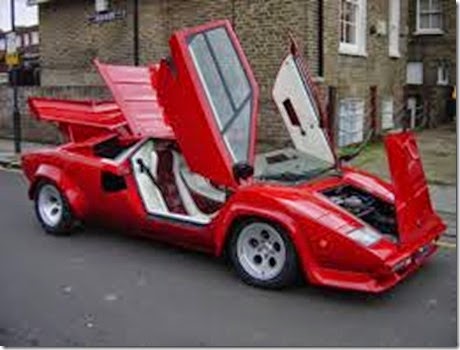 This one reminds me of Ricardo Montalban(?)

Seemed like an interesting drive except for the accidents along the way. Pretty spring flowers you picked for Sherry, Jack :)

Glad you got safely to your destination!

When you travel all sorts of things happen out there on the road. I bet you've seen alot over the years. Glad you safely got where you were going. Your bouquet was pretty. Bet it made Sheri smile.

It's good to hear you were an observer and not a participant in that accident anyway. They can happen so quickly and whether you were at fault or not it's easy to become involved in one. The flowers are beautiful. Definitely looks like spring there. I imagine it felt good to stretch your legs and take a walk after traveling all day. Hope you both have a wonderful Sunday !

Don't feel bad they thought you
didn't know where to turn and
got in the wrong lane and was
glad to let you in also with a
big rig.. Glad you are on your way
home..we will get the warm weather.
Everybody was busy and couldn't get the parade together..Also didn't
want to disturb Church Service.

Glad to know you made back safe n' sound! (Anymore that's not something to blithely assume, is it?)

Ya, I was just remembering my own traffic 'blooper' when I read my name. LOL! For the most part, I think there's lots of good-hearted motorists out there, like the fella who let you merge.

That make-shift bouquet is truly lovely ... more thoughtful than any fancy-schmancy hot-house variety!

I'm sure you see lots of accidents and all kinds of things on the road like you are. Pretty flowers for Sherry.

It's the double whammy of spring break and folks from the north who winter in Florida heading home for Easter.
Alabama Interstate traffic is a nightmare this time of year.
Glad y'all had a safe travel day.
R

Glad you made it safely to your destination. I have a childhood friend who lives in Starke. She just recently had her second knee replacement and is in rehab for that at the moment. Thanks for letting us ride along. Take care, Sheila