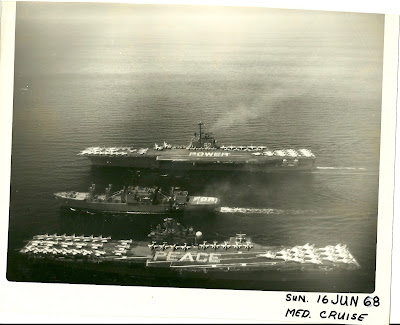 Above is the Indy in the Mediterranean, I slept just under that angle deck.Just under the word Power.

I remember as a kid when mama told me of the encounter of GGGrandpa and the Yankee, I was amazed. The story was of grandpa talking to the Yankee at night over a creek. When grandpa traded some tobacco for a newspaper. Enemies who were just young men following orders.  I tried to picture it and I think I saw real men. Since then I have seen things that reminded me of that story.

I have put this on the blog before, when I was on the USS Independence I worked in the Intel center we were OZ division and were called the ‘Land of OZ’. Working there allowed certain privileges. We worked with all pilots aboard but especially the RA5C pilots. The RA5C was an intelligence bird, no bombs or guns, just cameras and digital gathering equipment. Our photo mates processed the film and the Photo Intel guys reviewed it.
The unique part was the pilots all carried their own 35mm cameras, and we processed their film also. I was reminded of this a couple days ago when some country scrambled planes to escort a Russian Bear out of their air space. 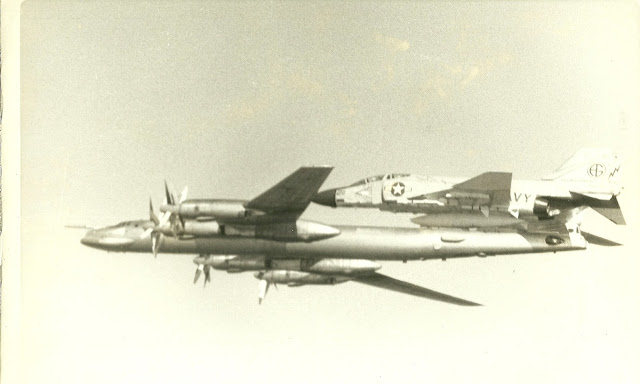 The Russian Bear is the large Russian bomber propeller driven.. I have pictures taken by our pilots personal cameras of the Bear. 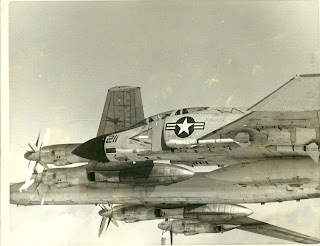 The one above was taken back during the OTHER COLD WAR, that it seems is about to re-start. These were F-4 Phantoms escorting the bear, not out RA5-c spy bird.
The pilots did get close enough to wave. I have one shot where the Russian Pilot held up a ‘Playboy’ magazine he was reading.  I cannot find it.
The pilots were like the Rebel and Yankee, except it was not a shooting war and they seemed to enjoy the encounters.

Nite Shipslog.
PS:
AT times I like to think back to time aboard ship, I told the skipper I would stay forever if he allowed Sherry aboard to live. I will never forget his words, “There will never be a female aboard a fighting ship.”

Can you smile at that?

I am working at a disadvantage. so I cannot past pictures where I want them. No auto tonight...

It's amazing the info you store in that brain, wow! Ships and planes and trains....these are a few of my favorite things. Great photos, great story about females on a ship; Sherry, we've come a long way baby:)

Glenda hit it on the nose...I also cannot believe your recall...amazing. There are days that I cannot remember what happened an hour ago., but several hours, well maybe. You truly have lived the American dream world. And the lasting love you two share make it all the more perfect, special. Like our dear departed friend Fred once told me, You are as 'genuine' and sincere as they come. I agree. Thanks for sharing your lives.
Loveya'll, ya know

Famous last words--there will never be a female a lot of places where they are now.

Yes, I remember that wonderful story about the Yankee and your Reb.
For some reason, this reminds me of an old movie called, "Das Boot." With no premonition of the story line, I was amazed to find myself myself actually empathizing with those WWII German soldiers ... boys, really.

Neat tie-in with today's armed forces. I can only imagine theimage of that young pilot showing off his copy of Playboy! Once you find it, won't you share?

LOL with what the skipper said about no female on the ship; boy how times have changed :)

Love that the pilots all carried 35mm cameras, loaded and ready to shoot pics of the enemy. That Playboy shot must be priceless.

Yes, underneath every uniform, there is a young man or woman with hopes, dreams, families and homes just like everyone else. People just like us ordinary folks that have undertaken a big job. It's nice that you told the human side. We forget sometimes what they've sacrificed with leaving their homes and families so far away.