More on Dad and Cars

Dad taught me to let a straight drive car roll the drop the clutch, with the car in gear to start it with out a crank or battery.
Even when I was a kid people would park on a hill to let the car roll off to start it, because they could not afford a new battery.  I have helped push many cars to start them.
Back when bumpers were bumpers, all a guy had to do was flag some one down and they would give them a push to get them started. There were very few jumper cables.
Dad taught me how to change a tire without a jack. You drive the flat tire up on a soft rock, pile rocks under the axle as tight as you can, loosen the nuts, then take the tire tool and break the rock up into small pieces and remove it. Then there is room to put the spare on. and back off or pull off the pile of rocks. I have done in in emergencies and it works like a charm.
When Shirl turned 16 Dad took her to get her license. It was in a small town and everyone knew dad. As Shirl was starting to go for the driving test, Dad yelled STOP, from the side walk Shirl hit the brakes. Dad walked over to the car and said, “Your tires were rolling!” 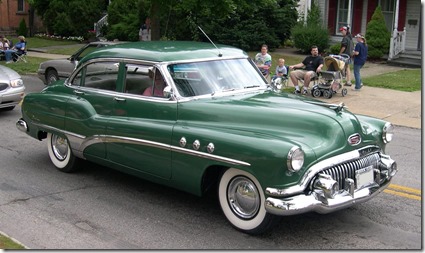 Shirl handled it well when dad and the state man had a good laugh.  She passed the driving test.
Dad was a good guy, when I wrecked my beautiful ‘48 convertible, he took us to the hospital, I had a cracked rib and Tucker was okay.  He never climbed my case, only said, “I hope you learned something,”
Up until the 1950’s most cars needed an engine overhaul at 60,000 miles. My dad could get 120,000 on an engine before it started using oil. Dad taught me the importance of taking care of a car.
Dad never trusted me to change the oil in a car. He knew I would stretch it. Several times when we would go home on leave, he would take the car and have the oil changed.
We were fortunate enough to be able to give dad the first 2dr car he had ever owned. It was a 1968 Chevy Malibu We gave it to mom & dad when I was transferred to GITMO. He gave us his older car to ship down. He would tell everyone, Jack and Sherry gave us this.
Nite Shipslog
<<<<<<<<<<<<<<<<V>>>>>>>>>>>>>>>>>> 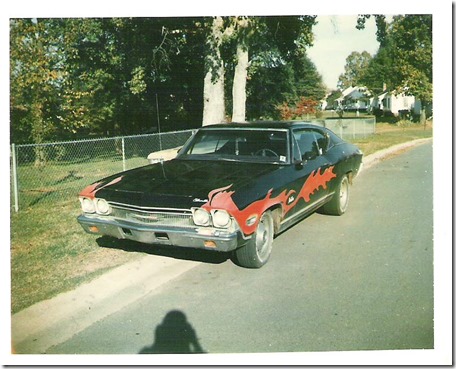 When Dad died, mom did not drive and gave the ‘blue’ Malibu back to us. I painted it and done a little detailing for Son-Mark’s first car.
Posted by jack69 at 10:57 AM

I love to read your stories, Jack.
Very informative and also speaks to the love and loyalty of you and your family. Thank you for sharing your memories....
J.

Its funny how the Malibu has been around for a long time and how much it has changed over the years. Your dad taught you the best lesson with taking care of a car; they will last a long time if they are taken care of indeed :)

We were lucky to have parents that understand teenagers. Dad thought
I was a good driver. He let me bring older people to church that could not drive. I loved that 54 Buick people could get in the back seat and not bother the driver. I am so thankful for good parents to put up with
two teenagers and still had their mind. They were a good example what
life was about and we were taught about life.

What a sweet gesture, giving your dad that Malibu!

Love his sense of humor about Shirl's driving test. Mostly, I'm intrigued about changing a tire without benefit of a jack. (Not that I've ever changed a tire in my life, mind you!) Where there's a will ....

Your memories of those times gone by bring a few good ones back for me too. Cars and times sure have changed over the years. Hope you both are doing well. A little cooler here but still it's to be sunny.

I had a 46 Plymouth Coupe that had a weak battery. I parked it on a small hill wherever I went and scotched(?) the front tire to keep it from rolling down. I loved that car.

I learned to drive and eventually got my license in a straight drive. I had a little MG-B so I know exactly what it was like to have to roll down a hill to start it. Did that many times. My dad also taught me how to change oil, replace a tire and at a time of an emergency, I learned how to replace the brakes. Today, My husband doesn't think I can do any of those things .shhhhh we can keep it like that. Ha.

Now its all automatic.
Lisa