The OTHER Blow out! Tires and golf balls. 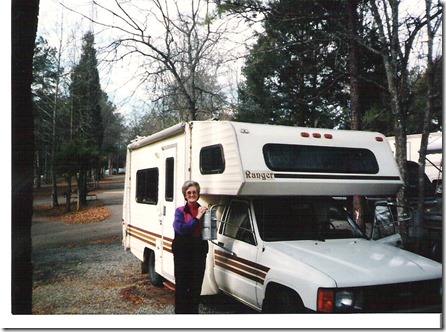 (Tires weren’t expensive on this dude) 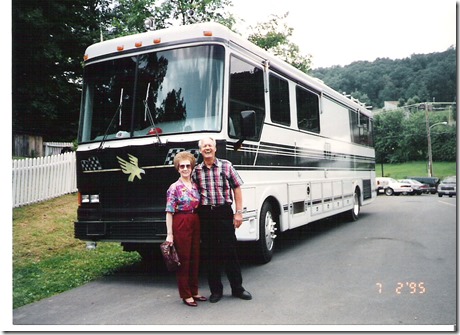 Our buddies, Sonny and Colette, Our Overland Motor Home.#2

Tires are very important on a motor home weighing 26,000 pounds. We bought a used Overland Motor home. Plenty of tread on the tires. At an alignment shop the mechanic suggested I replace the tires, he was not selling tires just warning me. 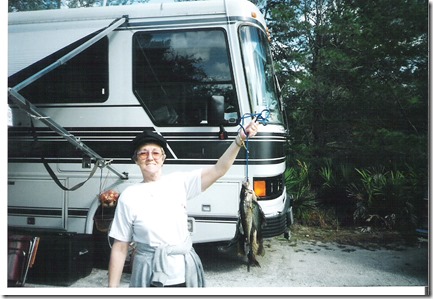 (Sherry’s string of Crappie, Our Overland behind her)

There was plenty of tread, they looked good to me.We got about 250 miles when the front left tire BLEW! We were traveling at about 60mph. The coach did not waver nor pull, so I so I eased off the road. Our road service costs around $100 a year and has been well worth it. 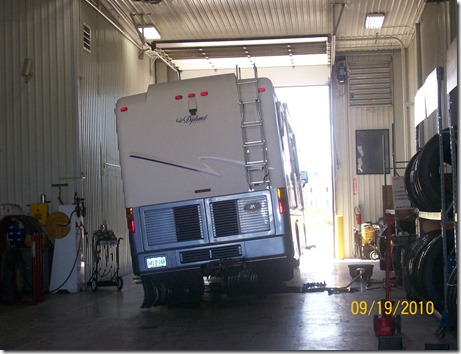 Anyway a few years later we bought another used coach. It had good tires and we drove them around the country a couple times. I had checked the date stamped on them and they were reaching the time to change(5-6 yrs). I am a little reluctant to purchase tires, they cost over $600 apiece and this coach wears 6 of them. 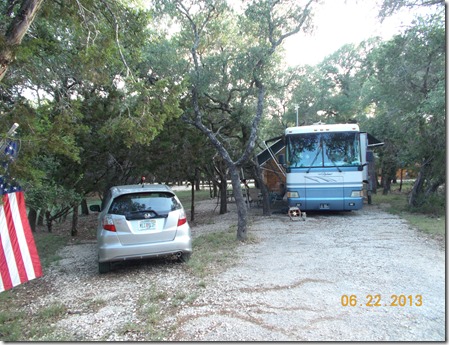 So again a couple years later I forgot, and we were on another trip. We took the back roads in Ohio and Kentucky. I don’t remember where, but in a town, stopped at a traffic light, I heard a blow out.  I mentioned to Sherry that someone had just had a blowout. We continued thru Tennessee into North Carolina A couple hundred miles later when we got on I-40. A passing trucker motioned we had trouble. I pulled over and it was one of our duals that had blown.

Since It was on the duals and we had made it a few hundred miles, I figured it was safe to limp to a tire dealer near Asheville, NC. We pulled in, he had our size, “How many?”

I swallowed and said, “Six.”

In a few minutes he waved me in passed the ‘No customers past this point’ sign. “Did you do this?” He was holding some golf balls.

“I have been in the tire business for 40 years. I have heard of this, but never seen it. Every one of your tires has 6 golf balls in them, do you want them put back in?”

He explained that some folk swore by adding marbles, balls or BB’s to a tire will keep them perfectly balanced.(google it)

I was thinking of the blow out in town and hoping someone was not hit by a flying golf ball!

PS: In one tire the golf balls has exploded and the inside of the tire looked like seaweed (the rubber from the balls). 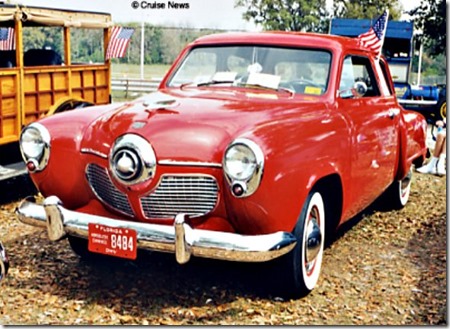 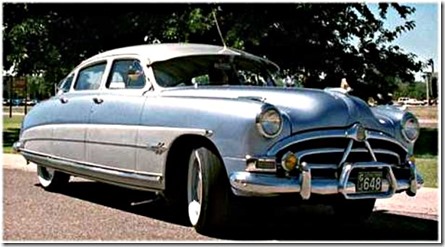 How interesting about the golf balls; never heard putting them in tires :)

Two things I always am concerned about on a car; brakes and tires. When son's car(s) would need either of them and he didn't have the money, we usually would help him along and fix the brakes or get new tires. Figured the cost was high at times, but better than the alternative if brakes failed or a blow out happened that could cause an accident :)

You always have the most interesting entries.

Oh my goodness! This is the most enjoyable (?) post I've seen in days! That is, 'enjoyable' to read ... not so much to experience. Tom and I are sitting in the doctor's waiting room and both of us started chuckling at your parting remark.

PS --
It sounds as if you and Sherry both have nerves of steel ... thank goodness.

Learn something every day. I never have heard about the golf ball idea. This was a fun post. Felt like I was on the road with ya.

I've never heard that trick Jack. It sounds like it may be an old wives tale.
R

How fortunate for you that none of the blowouts caused an accident or any damage. I certainly never heard about golf balls in tires before either. New tires would be a necessity with all the miles you put on.