Historical Photo:
I am sure we went aboard the USS Alabama BB60, but I cannot remember when. 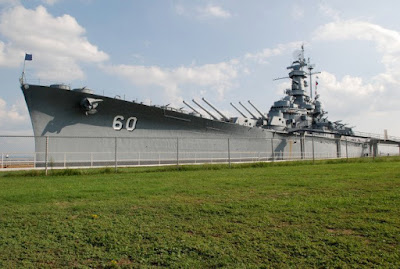 I love water falls. We have walked miles to see them. Alabama is not a very mountainous state. But There are enough hills and ravines to produce some nice FALLS.  One of them, Noccalula Falls near Gadsden Alabama . It is an absolutely beautiful waterfall, and to make it more interesting is the name. It is named after a sweet Cherokee maiden. Due to the following legend.

The unusual name of the waterfall is part of a
popular Alabama legend that has been
repeated for generations. As the story goes,
Noccalula was the daughter of a Cherokee
chief who lived with his people near the
spectacular falls.
The legend : After I read the captions under the water falls, I remembered the young lady had fell in love with a member of her own tribe, but he had no wealth nor famous history. She was promised to another and her true love was banished. At the funeral feast before the ceremony she threw herself off the ledge in all her wedding finery.  There is more to the death but the water fall is spectacular.  I was very impressed at how picturesque it was from the sandy shores below.
Above you can see a statue Noccalula as she prepares to jump. (right side)  I don’t have a lot of personal stories of Alabama. But we were in and out of this state many times. One of the things I do like is driving the back roads and seeing how and where people live.

In just two or three entries no one could do justice to any state, and I will not claim to. We have camped in the back country near Arly and in the cities like Montgomery.  And also in the country near Andalusia and Enterprise. WE have never had a bad experience with the local folk and the country is beautiful. 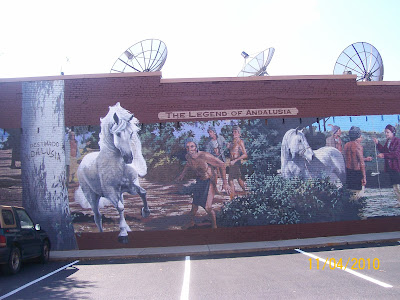 I like  murals. This is down town Andalusia. If I remember there is a legend about a horse called by that name, but not sure. We were camped near by when I took this. I did not photoshop this so the date is still on it. Sherry depends on dates, and when I remove it she doesn't like it.
I tried a quick search to find the legend, I found a book but no quick answer. 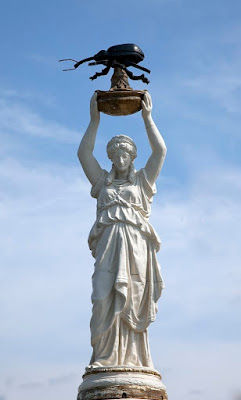 This may be the only statue dedicated to an insect! I expected to see a 6 foot boll weevil, this is better. 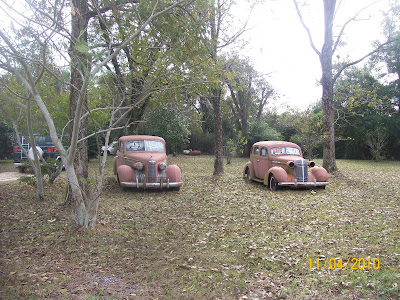 These two cars were for sale neat Opp, I wanted one, but Sherry said a picture is enough!
Posted by jack69 at 12:39 PM

Okay - you can't remember when you went on the ship?

We have a gorgeous waterfall about 40 miles from here. Amicalola Falls. http://gastateparks.org/AmicalolaFalls

The story of the Indiana Princess was on the movie called The Shack.

I knew none of these ... but you bet while at son's place, I'll be dropping them in conversation here and there. His sweet wife is quite the expert on all things Alabama.

If we don't have to be someplace at a certain time, I enjoy the back roads. (Unless you're behind a convoy of logging trucks headed to the mill!)

I like driving back roads too. Its enteresting to see how people live. Most of all, I like the backroads so I can scope out vintage campers sitting in back yards.

You have given me more information that I ever knew about Alabama. It's true each state has so much history it would be impossible to put it all in a few short words. I do appreciate yours as I am definitely what is called an armchair traveler. Snow and rain here today and I'm thinking Spring will eventually get here!

I'm always traveling when I visit here. Thanks for that. It's not a surprise that each state has it's own fine history and your informing us makes it so interesting. I love taking the back roads whenever we can but my man has always been a ' from point A to point B ' kind of guy. Once off the main drag however, he thoroughly enjoys it. Just north of us is Copper Falls, a very pretty hike, also so many more fine sites we've seen during our camping days.
Love n' hugs from our windy, once again,snow-covered north where we patiently await Spring with 'MA'.........life is bittersweet sometimes

thanks to you and sherry i get to be an armchair traveler.