Historical Photo:
Historic Castroville, Texas This is near where Paula grew up imma thinking. 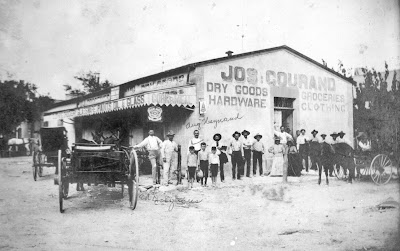 Presently.......
Time is rolling right along before we head to Florida. I have a Dr.’s apt on Tuesday, Sherry’s class reunion is on Sept 8th. Nephew Rick just flew in from Saudi. Funny thing that, He was saying the only money he had spendable was a 50 pound note from England. He has money from the Arab Emirate and Saudi Arabia and England. He mostly uses the credit card. Rick is like me a retired USN Chief but unlike me he is a contract worker.  He was in Afghanistan now working in Saudi Arabia.

Rickie was one of those kids destined to be ‘smart’. His vocabulary has always been way above my head. Not necessarily large words but words like ‘assistance’ when I would have used simply ‘help.’ Maybe more proper English than vocabulary, I should say. That is not the best example to use, but the one that first comes to mind.

Any way he is back in the states for a quick trip to file income tax and renew driver’s license. I smile when he talks about the drivers in Saudi. I e-mailed him once and said, “He while in Saudi, keep you your head down.”
He said, “Uncle Jack, it isn’t the bullets I worry about here, it is the drivers!“

In our talks after picking him up at the airport, he mentioned that many of the kids in Saudi get $200K sports cars for their 13th birthday. We were talking also about the work force. My cousin Ken worked in Saudi for years and commented about the same thing. The locals feel work is beneath them. The work force in the Arab Emirate, comes from India and the Pacific Islands.
The new prince is trying to put the Arabs to work, but Allah has given this oil to place us above manual labor, Allah be Blessed.

I was just thinking since we had  folks from Haiti last week and this week someone flying in from Saudi Arabia, if we just had pancakes, this could be the International House of them!  LOL

We are fortunate and blessed to have this house for use at this time. Shirl would be proud.  Her rent is paid up until December. I told Sherry we should have left her ashes inside until then.

At least this post was not morbid, ……..  Well maybe a little. 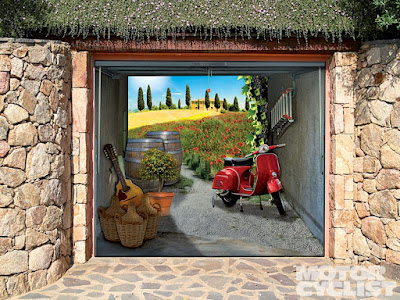 How about this garage door mural?
Posted by jack69 at 9:55 PM

“International House ”. You are so funny. Now I want pancakes! Hmmmm the daugher is here tonight so maybe thats what this momma will fix in the morning. SHe comes home sometimes just to sleep in her room and bed. And I get to mommy a little while.

Interesting about the local Arabs feeling the work is beneath them in their country and having to bring in people from other countries to do the work. An entitlement type thing. I wonder if they get any money from the government because of the oil and don't have to work? Hubby, as you may remember, works on a healthcare setting on a Native American reservation. The "locals" receive a quarterly check because the tribe has a casino and some other businesses. A lot of them don't work because they feel why should they. They are going to get that money and also can have a house built for them free (they have to pay utilities and upkeep) so why bother working?

International House of Pancakes? (hee-hee) I like the way your mind works, Jack!

At first, I was a bit puzzled about the Saudi reference. Then, embarrassed to be so ignorant. I know what you mean about 'big' words; my former hubby wasn't an egg-head but had a wonderful vocabulary. Just by osmosis I learned a lot!

So after December what will you do with the house?

In Saudi they give their kids 200K cars at 13 and in Haiti - they are lucky if they have food. Amazing differences.

Will he be able to change out his money?

You have an interesting life.