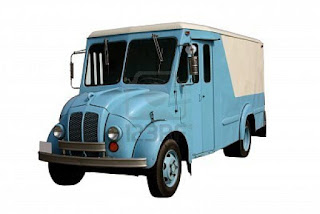 Similar to the Milk Man that brought milk to our door in the 1940s.

In any business at times you learn more than you need to know. I became familiar with a man who built custom insulated  windows. He made millions building affordable windows and he has a good product. I used them a few times.
Once in a conversation I mentioned that I had made a donation to a certain charity and all of a sudden many charities were writing me.

He laughed, Jack you are referred to in the trade as a ‘sucker’. My side business is a ‘Phone Sweatshop’. I have 15 operators who do nothing all day but call people on the phone for charities, retailers and anyone wanting to reach a certain segment of society. My guys make the calls most people despise, but it serves a purpose.

To point these calls to the proper audiences I buy ‘Sucker lists’. Of course that is ‘slang’ only used in the business, to others it is a list of 'People who have responded positively to ANY requests via phone.' When you respond or even talk positive that number is flagged.

So when I donated in response to that letter from the Salvation Army or Habitat, I became a sucker.  That made me sick inside. THAT LIST is not a list of ‘SUCKERS’ but a list of good-hearted people. BUT someone has learned  how to make a buck of human generosity by selling their phone number for another charity or business.

In the last few years it has morphed into lists of e-mail addresses. Now my in-basket is full of SPAM.

I will continue this tomorrow into an inspiration from Myra’s blog about Good Deeds or Samaritan acts. We are tired but back in North Carolina, after ‘committing’ an act of kindness.

Oh, you stated it well.

Glad you are back home. How long will you set the parking brake this time?

( kind of get this with the concept of a sucker list. I remember when we lived in Montana if an organization called, I usually would give money to them. I think they must have sold lists to other such places. Nowadays I still give, but more judiciously. Glad you are back home safe after your good deed. We always do need to do those good deeds :)

Okay, I realize I did not continue as my wife expected (or me for that matter) but tomorrow's entry should clear up some of the confusion started yesterday. I 'ain't right' as the saying goes here in Sherry's home town. Hang in there with me!

Just now catching up after several days, and you two have been as busy as ever! Glad you made it back to Belmont and if I'm reading these past entries correctly, Mark is the new resident in the charming Deltona address? Do hope you can relax and rest up a few days...love from Chobee.
Glenda

I know from experience the once you are on a list, it only grows and grows. There is no end to phone solicitation. You are on one list that is shared and shared again and again. I even get mail for some of my children at my address and they haven't lived at this house, ever. Being kind is being a good Samaritan. The ways to help are endless and often begin with a simple smile. Take a deep breath and try to catch you breath there...certainly has been lots happening in your life in a short period of time.

My email is always full of junk. Sometimes I think my computer hears me talking because I can say “shoes” and the next morning I will have 50 emails trying to sell me shoes. ! I do unsubsribe to emails every morning. I keep my box pretty clean.
My cell phone is were I get all the calls. I like that I can just block them until they call from another number. I do not guess it will get better anytime soon.
Its sad we cant give and show love without being harrassed.

Isn't that aggravating?! I don't mind so much deleting the spam e-mails, but hate how they've hijacked our cell phones. (I believe the "Do Not Call" registry is about as worthwhile a congressman - ha.) I know of one lady who has 4 separate e-mail addresses. One is used solely for charitable giving; one for on-line purchases and/or travel; one for on-line banking and bill pay; and the fourth for 'regular' use. Wish I'd thought of that!

I Hate with a capital H, the harassment of telemarketers. Well, just yesterday I had 4 calls using my own number....it's criminal and should never be allowed. I'm glad you're back home in NC safe and sound. Rest a bit. You're heart must also be tired from your Good Samaritan ways.
love n' hugs from up north where the sun is melting the snow. YEAH