Autos by Women
Helene Rother Ackerknecht, born in 1908 in Leipzig, Germany, was the first woman to design cars for GM.She worked on all the 1940s cars. 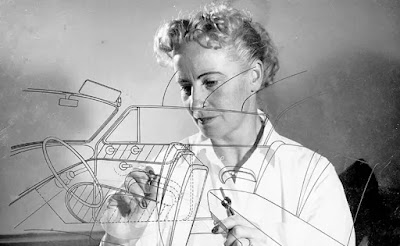 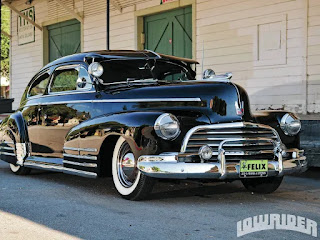 For today (Wednesday):
I enjoyed ‘some’ history in my short time in school. Since then I have also heard and read names of people who made a historical difference. Jane Austen was a writer that did some stirring of her own. Maya Angelou was also a poet and entertainer who walked on the edge. I have never known anyone who effected change in history enough to get their names in history books.

But in my short history I have known many women who could have given advice to Presidents, kings and Queens.  You have got to know the women behind men in uniform to know what they have overcome. Ora, who once blogged but now is alive on Facebook can hold you spell bound with her life, following her husband who was a Chaplain in the Army. We drove to Kentucky to talk her about the Cochlear implants I was considering. She is a wonderful, articulate and open lady. She gave me some pointers and a lot of good advice. She is also very cool, that lady. LOL

I had a sister in law named Ruth. Since my brothers were old enough to serve in WWII and I was still a baby, their wives were old enough to be my mother. Ruth was a down to earth MOTHER. I looked forward to staying with Ruth in the summer. They lived out in the woods. Her son Howard was near my age.

I related this in the book, “Jack and Sherry’ A love story”. When I was about 6 yrs old I had a runny nose and spied a box that I was sure was Kleenex. But the things were stuck together and I could not pull it apart. Ruth spied me sitting on the floor beside the box pulling at this thing. She asked what I was doing. I explained I needed to blow my nose. She was so sweet, “Honey use my hanky,” And she took the Kotex from me.  Well you must admit the boxes look a lot alike to a 6 year old.

Later in life at the Dr’s office he discovered she was on the verge of a heart attack. He started to call an ambulance and she flat refused. My friend will drive me there. Finally he agreed. In the car she told her friend to go thru Hardees drive thru, ”they won’t feed my anything at the hospital!” That is the Ruth-Truth, and she arrived at the hospital in time to be treated for a ‘for-real heart attack!’ That was her.
Nite Shipslog
Posted by jack69 at 11:17 PM

I do remember Ora, she did tell some wonderful tales of the life she'd led. Your Ruth sounds like quite a lady, wanting to eat while having a heart attack. She must have been hungry. Not many of us would think of food at a time like that. Ha ! Thanks for sharing these amazing ladies with us. I like your kind of woman's history.

We have lots of patients who stop to eat first! The problem with that is you're not supposed to eat for, at the minimum, 8 hrs before a procedure. 24hrs is standard. But she was no dummy! Love the stories of these wonderful ladies! We could learn a lot from them!

I learned much from my late mother about strong willed women who changed the world. My mom had a friend who was a pediatric doctor in a time when women were not considered to be as intelligent as men. I suppose my strong will qualities arise from my mother! OH my poor hubby! My mom admired so many strong women that I dedicate a board to them at Pinterest.
I loved these stories, always good to find new women we can look up to.
Stay healthy and safe.

I don't know which was funnier -- you trying to blow the Kotex or Ruth stopping by Hardees. Love the way you've chronicled the Infamous, Important Ladies in your life. Please, keep 'em coming!

Both Ora and Ruth are great in what they shared with you on life. I'm laughing out loud about the Kotex and the Hardees. Ruth was a thinker and planner ahead!