Corey and his Dad 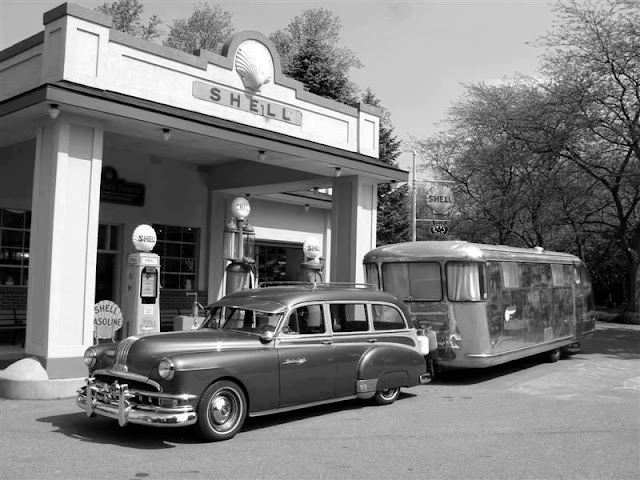 I am sure I have seen this 50 Pontiac before. Oh yeah, it is illegal to pump your own gas in Oregon, NO self service. NJ is the same.What about your state?

Since the decision to go thru Vegas and JJ had never been in the state of Washington, Corey offered to drive him up there and back. So they were gone most of the day That left me here with a beautiful lady all by myownself!!! ;-) 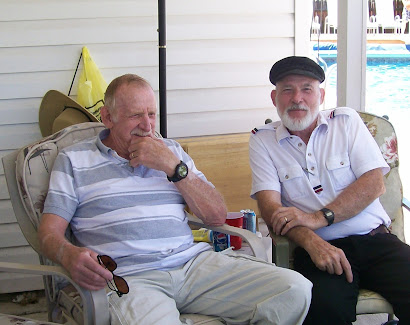 Above are the Grandpas a few years ago.

Corey's other grandpa, Richard, passed way recently. Corey was special to his Grandpa that was NO secret. Grandpa Dick was a big guy and red headed like Corey. It is also obvious that Corey misses him, they were close. I met Richard (aka Dick) several times, he was a likeable man.  He and his wife Joan were always nice to us. They visited us in NC and we in their home in Utah.

The trip will give them a good time just to talk. JJ is the only father Corey has known.  JJ does consider Corey his own, we do too. WE are proud of all our GRANDS.

Most of our trip out west has been HOT, but since being in Salem it has been cool, at times in the 60s. We have decided to head south thru California. It is approx. 1200 miles to Las Vegas, but since we are out here we want to see Cousin Dewey.

Dewey is the Darnell family reporter. Even when he lived in Daly City, CA, and worked for the ‘CBI’ California Bureau of Investigation, he knew more about the family on the East Coast than I did, and kept us up to date. 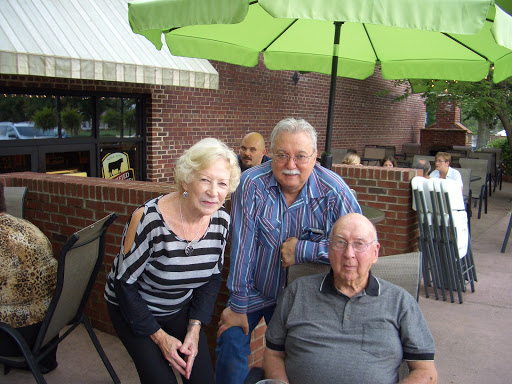 Sister Shirley, Dewey and Harold Fullbright, This was one of Dewey's trips back East. Harold is the oldest cousin on our side of the family.


Dewey is just a big teddy bear and a happy bachelor.He was a collector of Hollywood memorabilia. He has a picture with many movie stars. His desire is to move to Taiwan to spend his last days. He loves the far East. BUT to move he must relieve himself of thousands of autographed books, pictures and souvenirs from movie stars.

I have seen the collection, WHAT A TASK! (He may never get it done.) Dewey is/was not a prodigal, just a traveler.

We should be driving into California when this is being read on Sunday morning.

P.S.....Since I am back in good graces with my wife, I could not find a picture of Dewey and a movie star, I thought I would upload my star doing her exercises here on the Pacific coast. This girl does not show her age!! 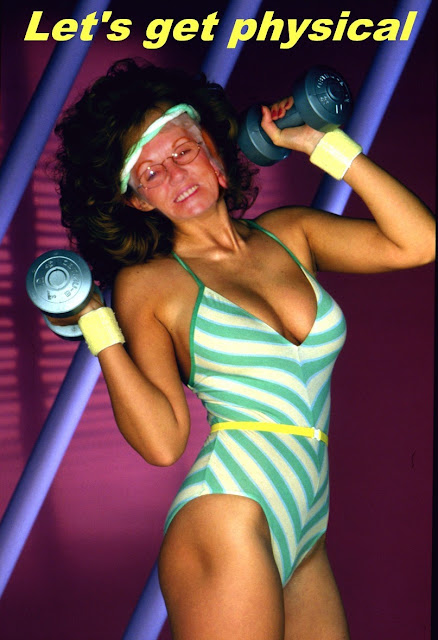 There are those who would think this is Photoshopped, I know the truth!!!!!!! The girl is beautiful!

Glad Corey and his dad got to spend some time together.. A father son bond is more than blood . I have a sweet granddaughter that I call my own, but I've never met her other grandmother. It's special you were able to meet Corey's. Enjoy the trip to California. The coastline must be beautiful. Nice you have some folks to visit along the way. Enjoy the ride.

Oh WOW!!! That Sherry is amazing, and not photoshopped??? Y'all be careful in California, so happy to hear about your fun travel, Love from Chobee, Glenda

What does Sherry think about your posting her picture like this? LOL :) She looks great! I'm thinking you all will enjoy the visit with Dewey in California. Stay safe though with all the fires they are having!

I, also, concerned about your travels thru fire......be careful. I'm sure you'll take the safest route. And that Sherry, she never did slow down did she and looking fab.! lol ! If my guy would post a pic of my younger days like that, I'd be forgiving. :) It's awesome for the boys to have special bonding time together. What a memorable trip you are having. Enjoy your visit with Dewey. He sounds like another wonderful guy.
loven'hugs from up north where we had a fantastic, relaxed visit at Dustin's cabin with his family and in-laws. All of them are so gracious and easy to visit....another memorable day for us too.

Sherry rocks!
That was sure a sweet gesture on Corey's part to make the drive into Washington. So soon after losing his other grandpa, I'll bet your visit was even more appreciated. That's something about Dewey's plans to relocate to the Far East! Sounds like the kind of fellow who's making sure he won't pass with any outstanding regrets.
Stay safe!