Traveling south out of Oregon into Northern California 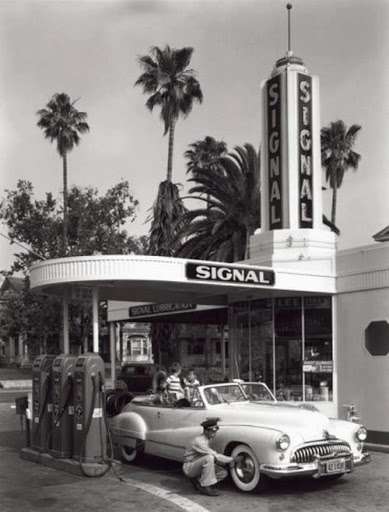 A '48 Buick convertible getting the tires checked.


Now for Sunday’s ride into California..

Leaving Salem the landscape was flat and mostly farming. 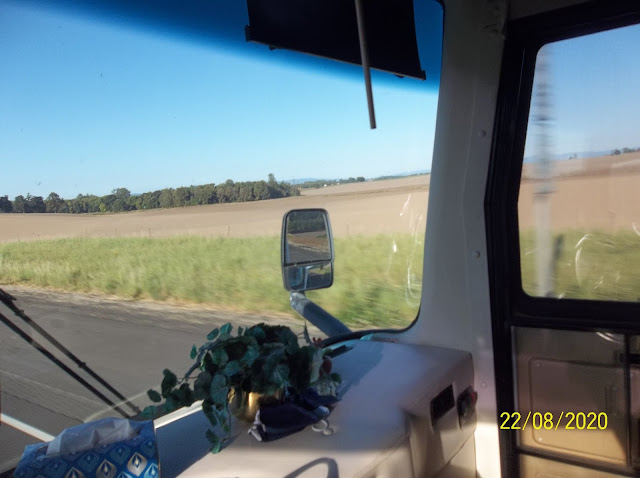 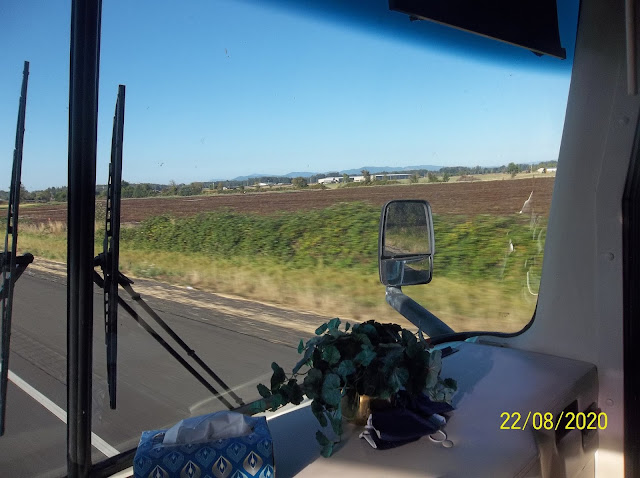 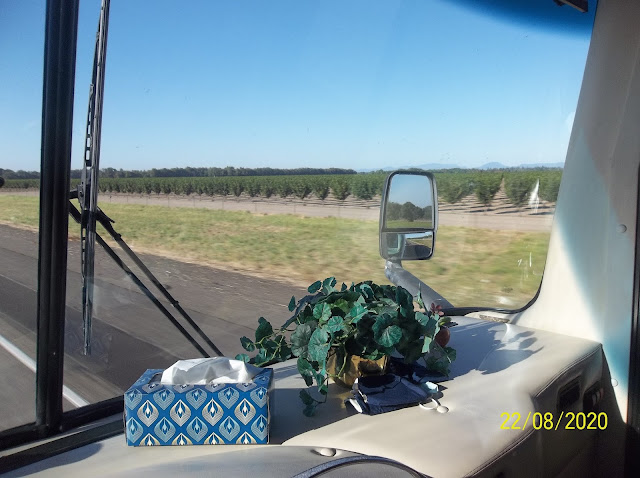 WE also saw much lumber and logs. Oregon produces lots of that plus oodles of lumber yards. 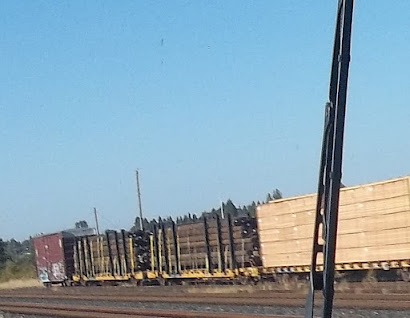 About a hundred miles down the road it became a little rough/ then mountains. They would have been much more beautiful if the smoke was not so dense. 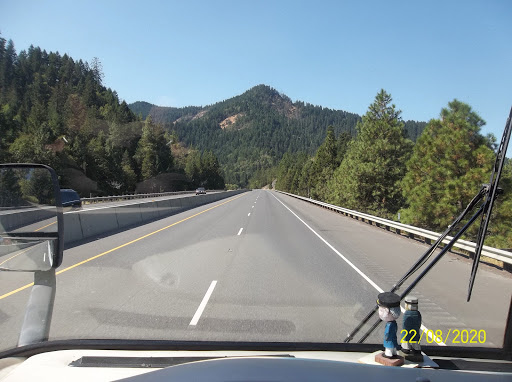 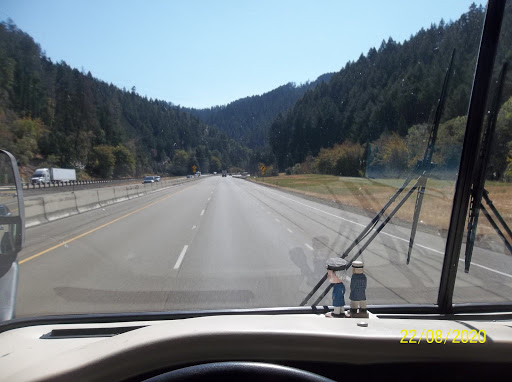 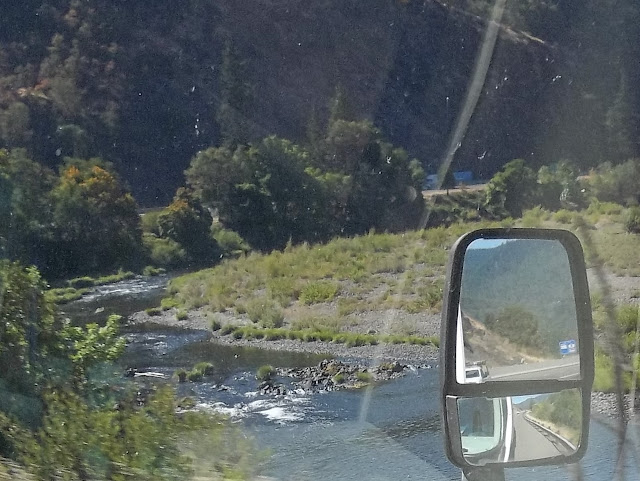 Then we started seeing this warning: 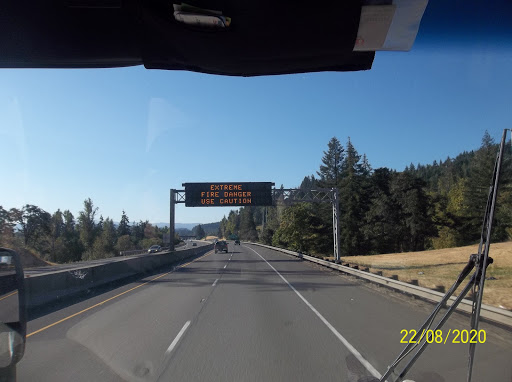 The mountain roads were both straight up and down some mts and some curvy as you would expect. It is the long 6% up and down that are tough on any vehicle. 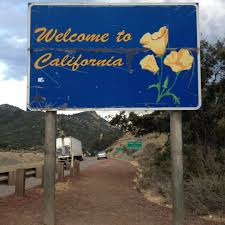 Then a rock slide at the top of the mountain. For us it was just a sight to behold, but for the folks going North, it was a miles long slow climb down to one lane at the rock slide. 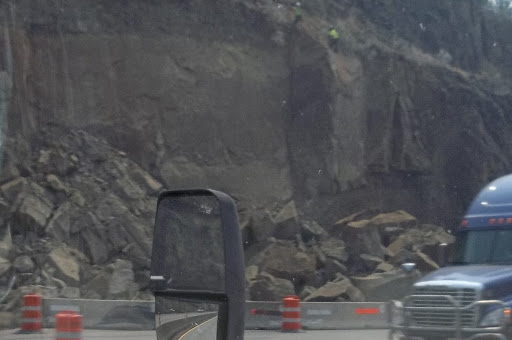 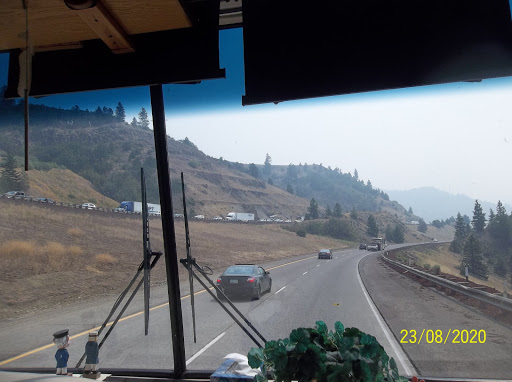 The above line was miles long. We had seen some Oregon mountains, but the smoke was starting to hide the tall California mountains. 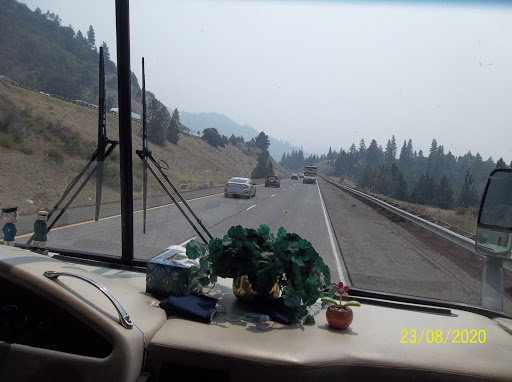 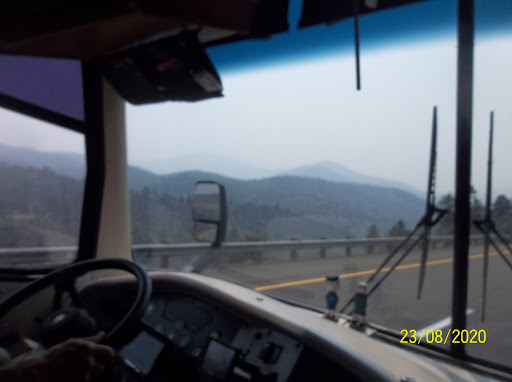 These burned trees were recent but I do not believe part of the present series of fires. There was much more damage, this is a sample. 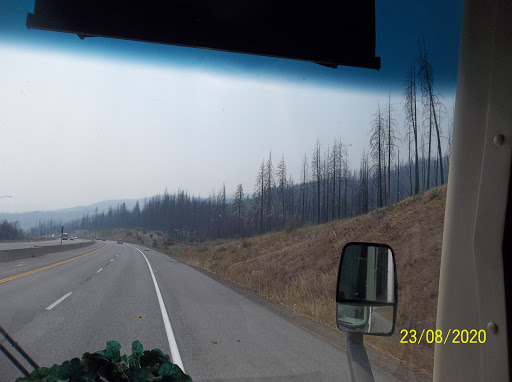 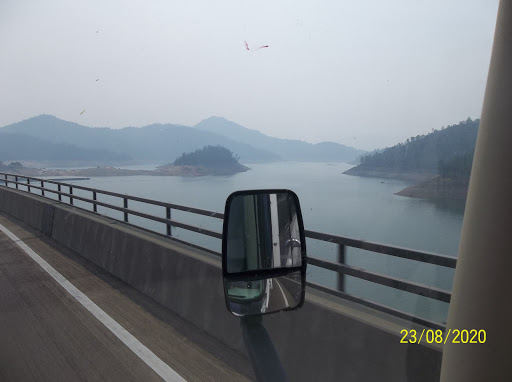 There are higher mountains behind these but we could barely make them out. 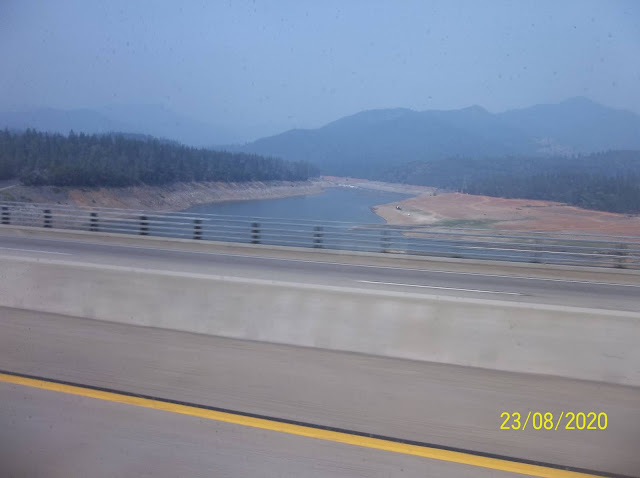 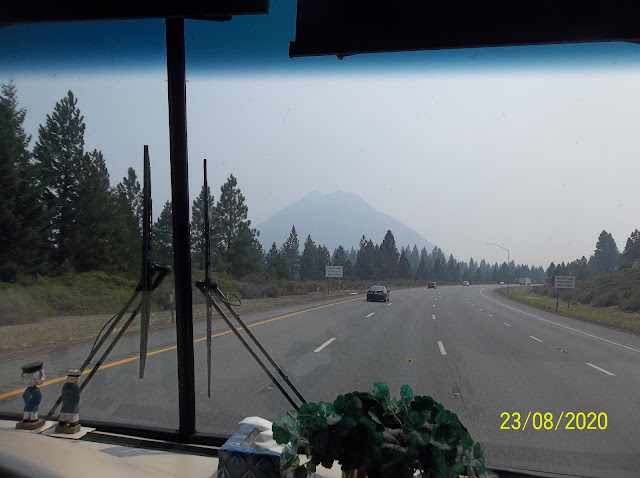 The smoke was so thick most of the time we could not see the huge mountains, some you could make out thru the smoke.  WE finally wove our way to more flat lands and more farms and cattle.  Then the million hazel nut trees. 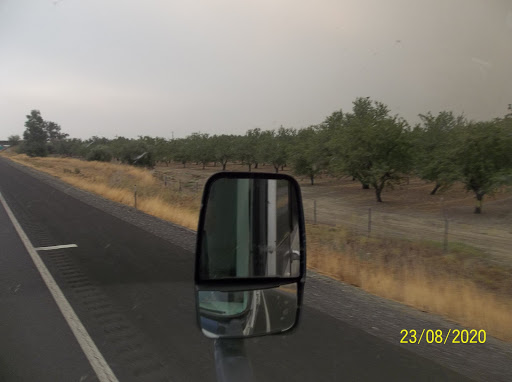 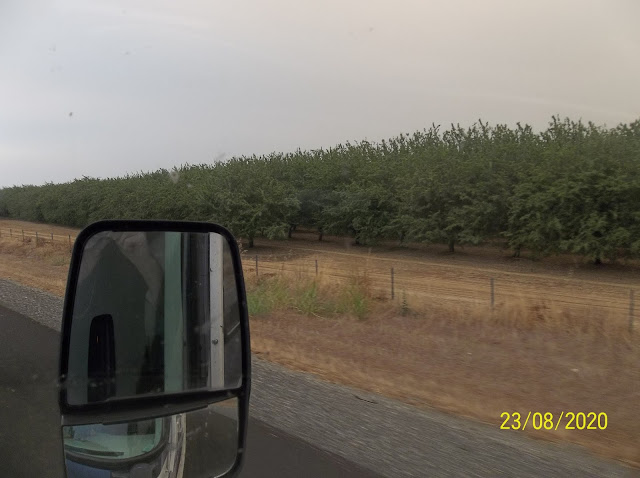 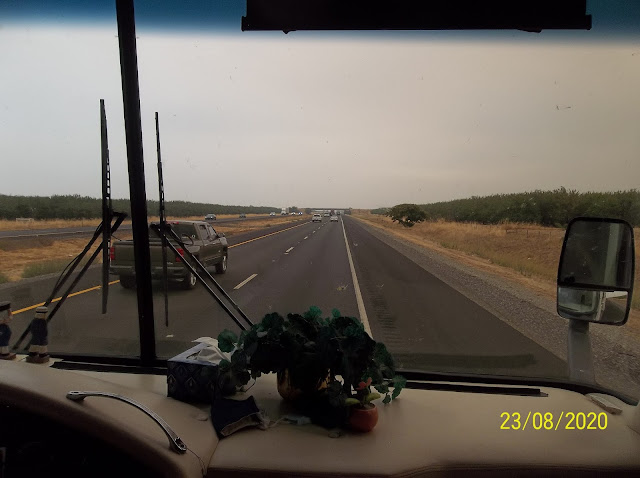 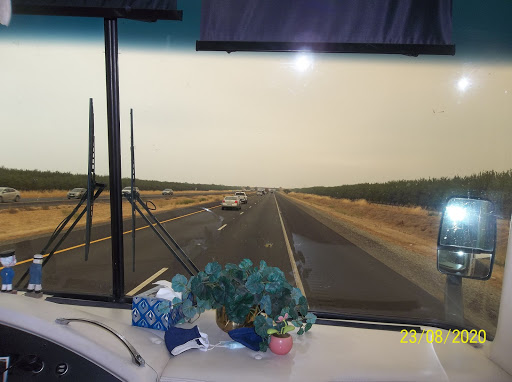 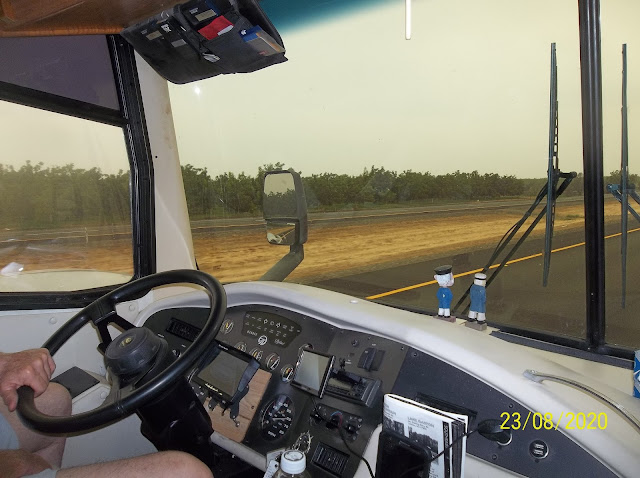 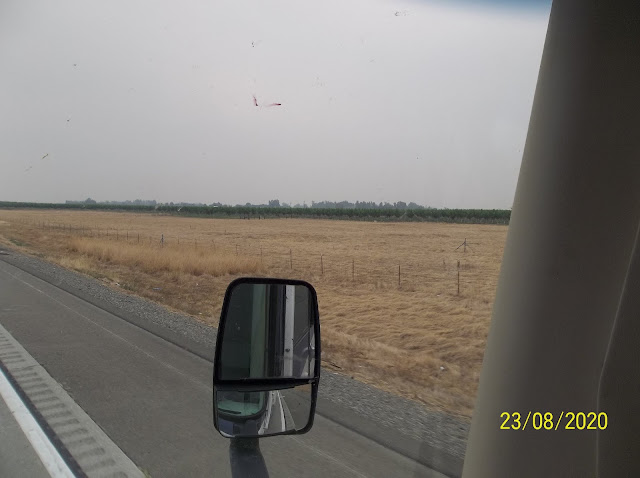 Most of the tree farms and groves we had no idea what they were growing. 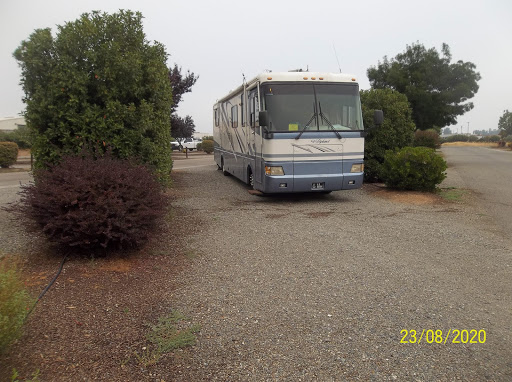 We ended the day at the Rolling Hills Casino in Corning, CA.

Nope, we did not make it inside. LOL

PS: Next Southern California, hopefully no fires or smoke

So sad to see all those trees that have been burnt down. Hope they can be replanted some day. Those fires have been on the news a lot. But actually seeing them would be scary. So much devastation and loss. Hope you all have safe travels and leave those fires behind soon..

I remember driving through Corning. I think they are known for their olives if I remember correctly. Its terrible with all the fires California is having. You wonder if there is any part left to burn. Great shots you took though. We traveled that road often from Medford to San Diego to visit family years ago.

My sister lives in southern CA. She said it has been miserable hot and fires. Such a pretty state. You are really seeing the states!

So scary to think of you, Sherry and JJ driving into the fire areas. Please be safe. I am praying for those having to endure the fires. A week of gentle rains would be so nice. Blessings, xoxo, Susie

Nice Pictures and great narrative of things, can't imagine a rock slide of that size, seen a few on I - 81 but not big ones. They say the Fires are Bad, can't imagine !!! Thank You for the Arm Chair Visit again, Safe Travels and sending you Good Vibes from Back East !!!! Gary an Anna Mae

wow. the last time i checked in you were in Michigan. you've traveled miles and miles since then. (health issues have kept me offline) my mom lived in Napa most of her life. my brother is dealing with the smoke and wildfires out there in california. hope you don't encounter that. stay safe. enjoy your trip.

Those wildfires are something else! Of course I'm fretting about the impact it's having on the wild animal population.
That rock slide looked significant! I wonder if that fellow in the yellow slicker (half-way up) wasn't trying to secure things (?) to prevent further damage. Wouldn't want his job!

I remember seeing Yellowstone in the 80's after the fires and it was shocking. Stay safe out there!

Thanks for taking us along on your road trip thru our states. Every state has it's beauty but to see the burned trees makes us realize how fortunate we are to live where it rains often enough to keep our trees green and of strong roots. I was glad to see you taking a lower route to get out of the smoke filled air. So where to next? This has been so interesting, especially the mountains. We have hills but few that qualify the name ' mountain.'
loven'hugs from up north where the heat was crazy today and air quality was miserable to breathe. I guess I have to carry my inhaler with me at all times. Carry on~~~~~~~~

Wow it is smoky. It is sad. Seems like California is aways on fire.
Wait, you didn’t go into the casino? I would have had to check it out since I have never been in one.