Stuck in the Mojave it was 111 degrees. 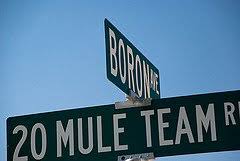 An hour on the road on Tuesday, Sherry again smelled diesel fuel. WE were just passed "Twenty Mule Team Road" and even with the Borax company in the Mojave,  I immediately pulled to the side of route 58. We could see the Boron mine across the road to our left,  the largest one in the world.

I snapped his picture of the desert just before Sherry smelled fuel. So this is the area we first crashed in. 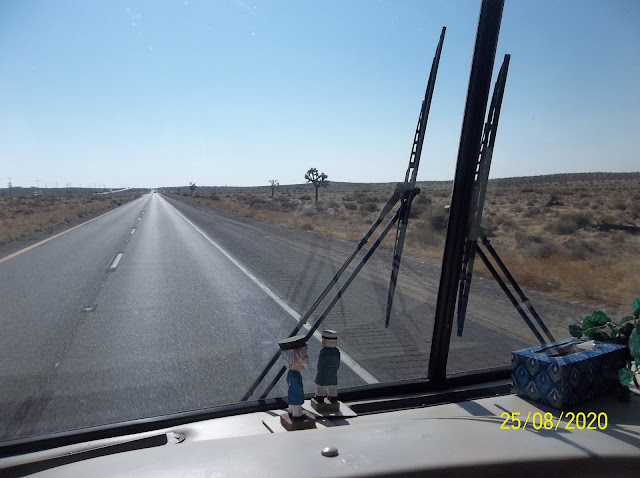 Outside and to the rear where again I saw much diesel fuel. Upon examination, the very part that we paid $$$$$$$ to have replaced in Indiana had failed.

Jack Jr. again came to the rescue. He located the part. This time in Irvine, California. We bought the part and he took off to get it. This time 150+ miles.

WE were on the side of the road being buffeted by trucks and methinks it was bothering my sweetheart. I immediately set to removing the part, this time I decided to fix it myself. Once the part was out. I fixed it so it did not spray diesel, reinstalled it. Sherry started the engine as I observed. NO LEAKS.

Jack Jr had texted Sherry that there was a rest area about 10 miles ahead of us.  I determined to drive on 5 cylinders to get off the highway. 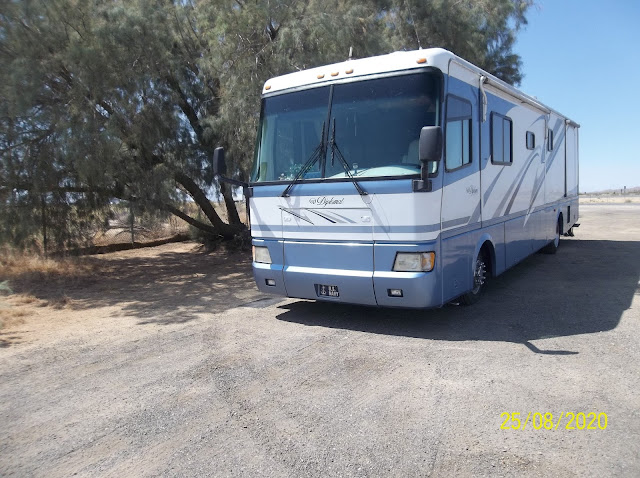 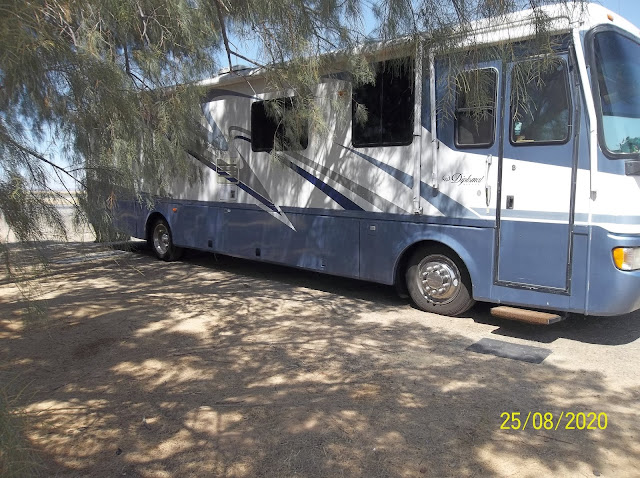 Again I removed the part to be ready for installation when JJ made it back.

Needless to say, I am not happy with this Cummins engine. Our last diesel was a GM Diesel.  Not half the power of this Cummins, but it never left us stranded and NO major costs at all.

I hate to say it, but I have just vowed this is the last LONG trip in this coach. I hope it holds together for a few short 500 mile trips to Florida, before we have to get rid of it.

When the engine was fixed in Indiana, I  asked that they put the missing brace on the fuel line, they did not do that, basically causing this failure. So I asked Sherry to call JJ and asked that he pick up the brace. He got back and we got it all put back together.

JJ was telling me that the Cummins parts place had a big sign, no cash or CC.  They would not take his cash for the part although he had the exact amount down to the 16 cents.  But they did allow him to put it on his CC.  It was supposed to be paid online.

Anyway with everyone working and holding lights we got it all done and are spending the night in Boron, CAlifornia.

I am beat, I think JJ is but he doesn't act it, even after driving over 300 miles to get the part.

I am sorry for the break downs you are having - maybe the RV is tired. You sure brought the right person along to help though.

Grueling temps to be stuck in! Glad the part was obtainable and you had your son to help you!

Heal from Broken Heart” Reunion Love spell from dr.Adoda brought my husband back” contact dr Adoda to help you get your Ex lover back urgently after breakup/divorce.
I live in USA Rhode Island and i am a happy woman today? I told my self that any love spell caster that could change my Life and that of my family, i will refer any person that is looking for help to him. If you are in need of Love Spell to Save Your Marriage OR Get Your Ex lover Back. Please visit (http://dradodalovetemple.com) and please tell him Mrs.Kimberly Christopher referred you to him, dr Adoda brought my husband back after he leaves me for another woman.. Here’s his dr Adoda contact,Email him at: adodalovespelltemple440@gmail.com or WHATSAPP him on +2348112825421 .

Prayers for you as you resume your trip home, so happy you were able to get back on the road safely. Be safe. Love, Glenda

I wouldn't be out working on anything in that kind of heat, but glad you persevered and got it fixed so you could move on. I'd be looking to replace that coach before another long trip too. Glad JJ was there to help you out and run for the part. No small drive for sure. Glad you all are ok and can get on the road again.

Its all part of making memories. Glad you got it fixed. Like Nick would say, “If you want something done right, you have to do it yourself”.

I'm glad you have it fixed and even more glad JJ is with you. I can't believe the part place wouldn't take cash for pete's sake. I am super impressed about you and your son's mechanical abilities. Amazing. We'd still be sitting by the side of the road all dried up in the heat! Ha! Good luck on your return trip!

Oooooh no! OK, I know 'they' say everything happens for a reason ... but this latest setback is over the top. Thank God y'all are safe and TOGETHER. We're keeping you in our thoughts and prayers.

Sorry you're having issues. Sounds like you should have stuck with GM. It's always frustrating to have delays. And yes, it was totally awesome that JJ could run for parts again. Have a good long rest. Travel safe in the heat.
loven'hugs from our north where today was fair weathered and too hot to take care of the garden..........oh, the produce...today was 37 palm sized tomatoes and 20some cucumbers. Love you guys, now stay save as you venture out again.