Eileen Conrad, The voice of an Angel 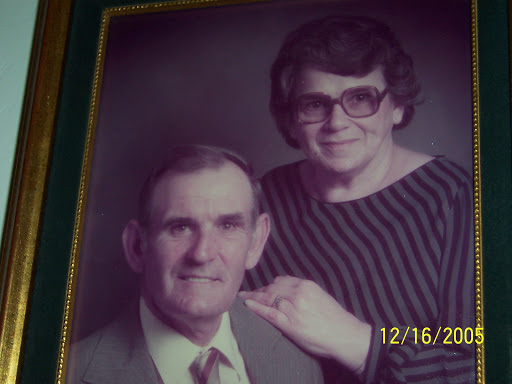 (Today we are on the road thru Idaho to Ontario, Oregon)

Everyone has known a special person. Talented enough to be a star, but humble enough to follow their heart. Eileen Pinder was comfortable in Florida. Then she met a soldier just home from WWII. Love took over and she married Kenneth Conrad and happily moved from the conveniences of Florida to the Missouri farm with the wells and outhouses.

It was probably 1960 we met the Conrads’. I heard her angelic voice sing as if singing to thousands, “When they Ring Those Golden Bells” to an audience of 35 and was taken aback, my mind said, ‘She should be in Carnegie Hall.’ That range and power shook the walls of a little church in Moberly, Missouri.

When we got to know her, she seemed not to KNOW how talented she really was. I mentioned that to Glenda and she replied, “You should hear Vickie, she inherited mama’s voice!” We just got the news that Eileen passed away. She is singing with the angels now and Kenneth is smiling ear to ear. St. Peter may just make her the lead singer.

The sweet mother of 10, Harry, Glenda, Juanelle, Robert, Kenney, Mary, Irma, Vickie, David Luke and Lillian. Kenneth farmed and worked full time at ‘HB Chance’ to support his family. I know the children must have had their differences, but they always pulled together. They are a real family. People respect that Conrad name.

EVERY child has been successful in their own rite, making mom and dad proud. The last time I saw Eileen she did not know me, but when I told her I loved her; she was embarrassed put her hand over her mouth and looked around as to see if anyone had heard that ‘blatant’ remark to a married lady. (Big Smile) It was so sweet.

You could see the love when she talked about her ‘Sweet Kenneth.’ Until her death and with dementia, she would sing and never loose the words. The family (especially Juanelle) who remained in the area protected and took care of Mama until the end. The rest contributed as they could, but they remained family, all.

Fair winds and following seas Eileen, your sweet Kenneth is waiting with open arms along with Sister Irma Lee.

PS: Sherry and I had the privilege of meeting a famous musician, but unknown to the public. He drove a beautiful Black Mercedes RV.  He had played Sax for Marvin Gay, Lou Rawls etc. He was very unassuming. He told us Marvin had been a childhood friend and gave him his first gig. From there on Marvin’s Singer friends called him. He said, “Lot of talent out there that ain’t never gonna be discovered ‘cause they don’t know the right person. Shame it is too!”

God gave Eileen her voice, let us borrow it, then he called her to sing in HIS Choir.

What a beautiful eulogy! Especially where you wrote, "Kenneth is smiling ear to ear." My sympathies to Glenda ... and, of course, all who loved her.

Your 'unknown' sax player's words are SO true. Oftentimes I've said to Tom, we would never have known the likes of Carrie Underwood or Jennifer Hudson (for instance) were it not for shows like American Idol or The Voice. (And I'm not embarrassed to admit I'm old enough to remember Ted Mack's original Amateur Hour!)

So sorry two hear of the loss of a good friend. Yes, she's surely singing with the angels now. What wonderful memories you have of her and her sweet family. They live in our hearts forever.

What a heartfelt tribute to your friend! Heaven gained another member of the choir singing praises to her Lord!! Prayers for the family!

Great Tribute and explanation, Marvin Gaye was singing our Wedding Song, "I Can See Clearly Now" as my Blushing Bride walked down the Isle in Church ! We will be riding along and sometimes we Both will start singing it ! I can't imagine just how big that Heavenly Choir must be ? Enjoy your trip, My Son lives in Portland Oregon, It is in the Beaverton Area or Portland ! Sending Love and Safe Travel Wishs ! Gary an Anna Mae

I'm so sorry for the passing of your friend but as you said she's with family and singing where all will appreciate it! I've said this many times but everyone has a story no matter how humble or how famous. Yes, many people have star ability in the arts but for some reason never find that spark to get them noticed. When I see how some "stars" turn out maybe staying away from all that fame and fortune isn't a bad thing. Have safe travels Jack and Sherry! My son lives in Oregon and hopefully we'll get out to see them next year.

No one could have said it better, we Conrads all thank you and Sherry for giving the gift of your presence in our life. Your love for us is unequaled. And yes, Mama was a talented singer and a wonderful Mom. Love and hugs from Chobee to all y'all travelers, Glenda

So sorry always to loose a loved one but also so happy she's with God and her loved ones. My condolences to Glenda as she will surely miss her Mama. I've always thought another star shines brightly in the heavens as your friend Eileen sings with the angels. Have safest travels as you move along. I can smell the ocean.
loven'hugs from up north where we are eating fresh dug potatoes, corn on the cob and tomatoes for supper. Yum Yum

What a talented woman! You were lucky to have known her. Such a gift.

Where will you heading next??

Sweet little post. Sorry you lost a friend but glad you can smile knowing where she is.

Packing up to go home
Lisa