Getting High on a mountain this trip & Airplane in 2008… 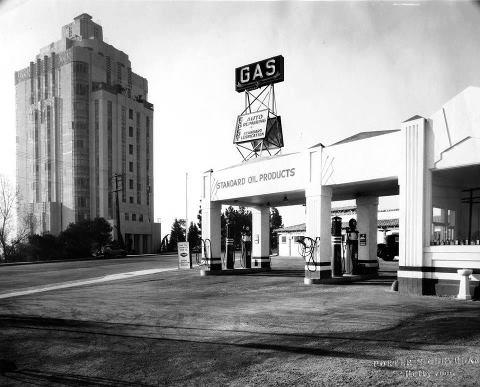 There is a theme park in this area called “The Lagoon”.  Jack Jr. took Elsie Mae there on Thursday; they came back beat and a little queasy from the rides.  They shopped earlier and had a very good time. 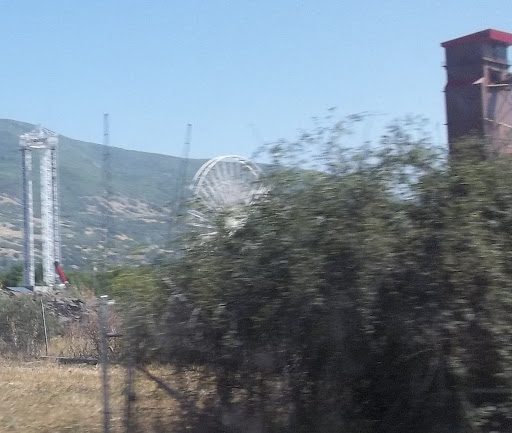 (passing shot of the theme park and mts)


Today we climbed higher in the Wasatch than  ever  on previous trips. I wanted to get a better picture of the Great Salt Lake. Ben obliged. 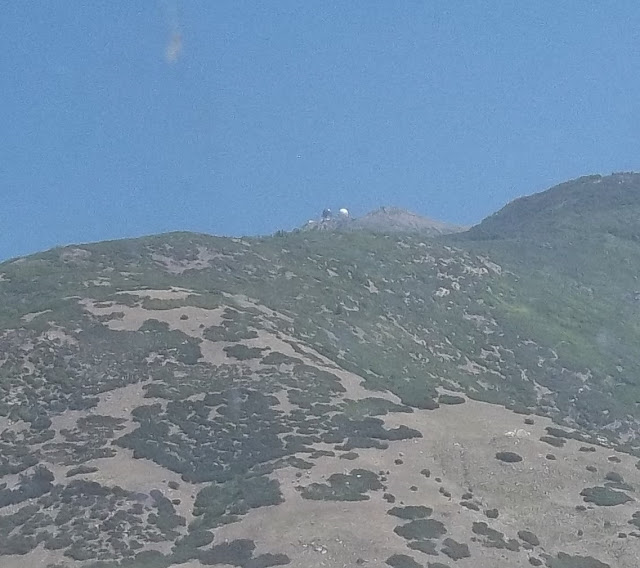 Our destination is the two radar domes on top of that mountain,  about 4000 ft up. & 9 miles by mostly one lane dirt road. 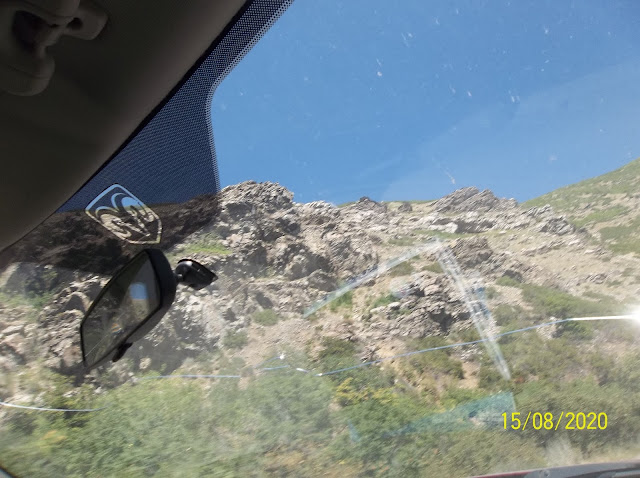 The rough mt. side (excuse the windshield reflections) 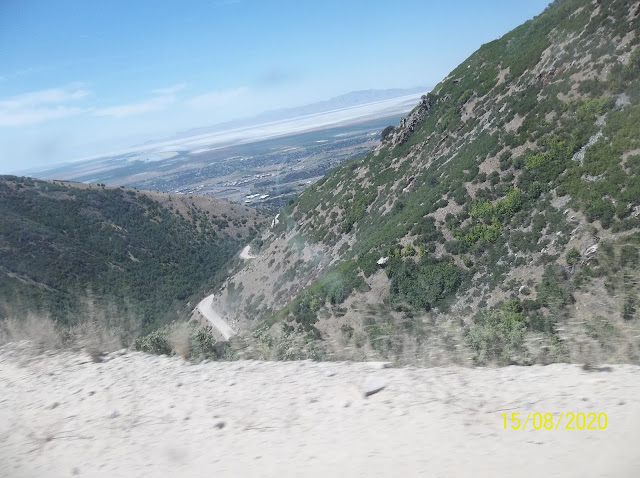 Above Looking off the side of the mt. at  the road we came up on. Salt Lake in the distance. 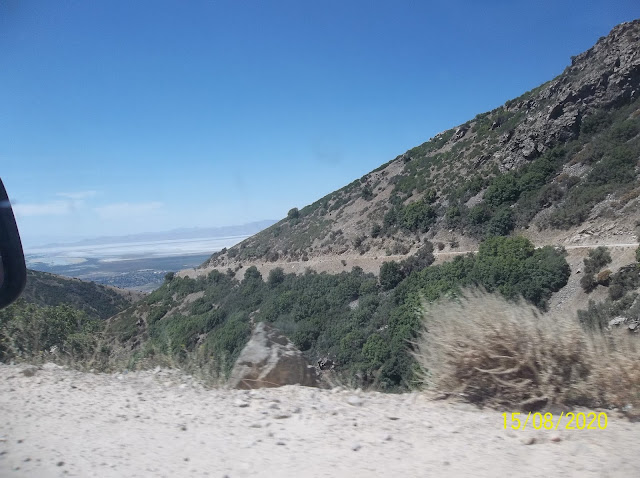 Looking back after we leveled out  for a little. 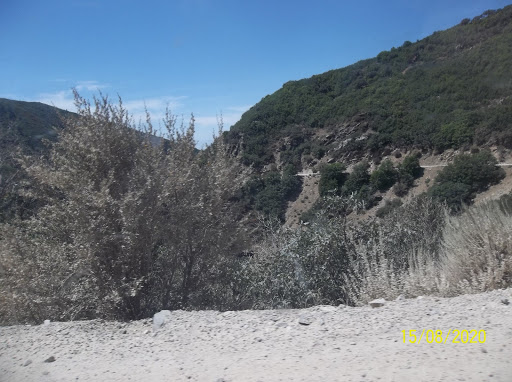 Above where we have been, now  headed back up,  below looking at the road ahead. 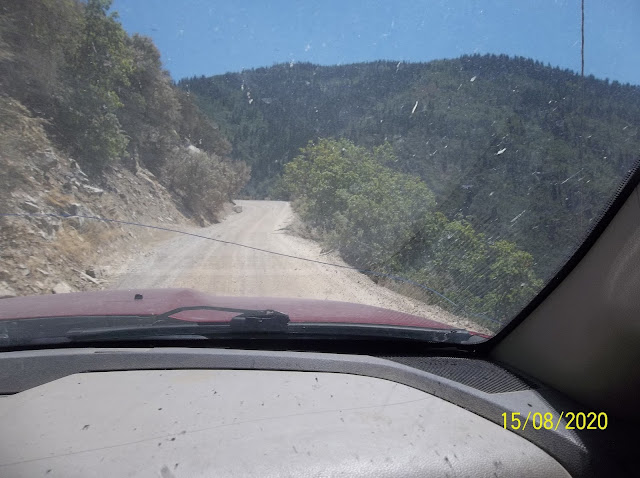 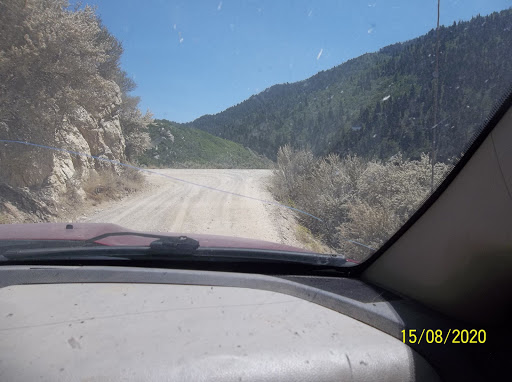 The road was paved for a couple miles then one of the worst dirt roads we have used. Ben was driving. There were no guard rails and the road was one lane with some pull offs for passing. Altogether we met about 12 vehicles of all kinds, only a couple close calls for car damage no scares of leaving the road.

Sherry, Ben, Elsie Mae and Jack Jr. at the top. 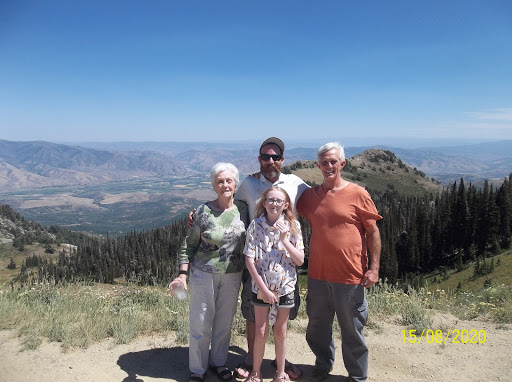 Below is JJ Elsie and Ben looking down at Morgan the town where  Elsie and her mom live. 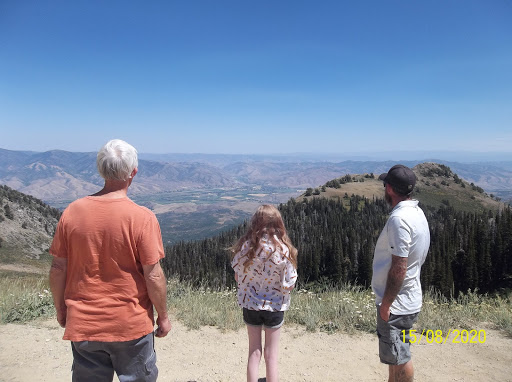 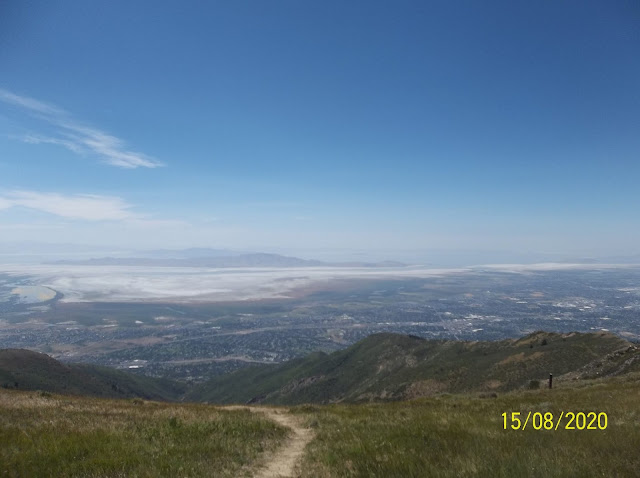 Above is the Great Salt Lake and Layton where Ben Lives. 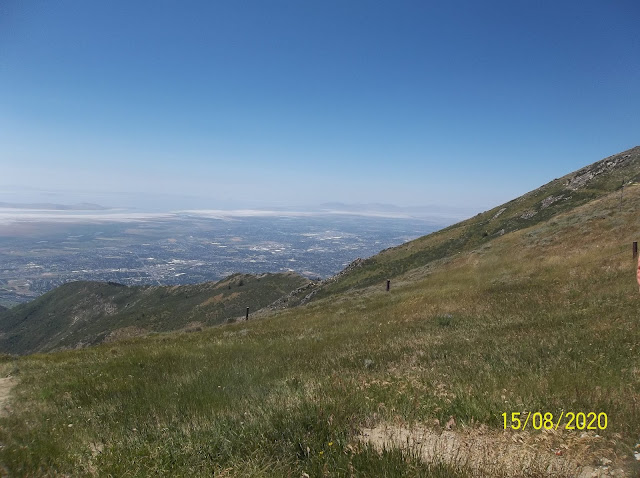 These are views of the area and lake, under a haze. 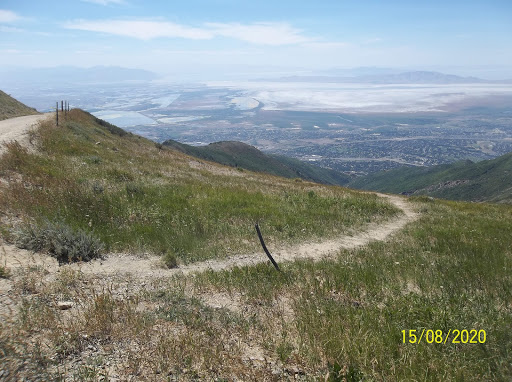 The shot below is common as you drive here in the Wasatch. I love the rugged look.

The view was fantastic, but the haze over the salt lake made it impossible to really see it on film. The Great Salt Lake has a large island called Antelope Island.

There are many lagoon areas around it.  Much can be seen  with the eye but not well on a photo.

I had to go back to 2008 when we flew out to give you an idea of the Salt lake and the surrounding lagoons. 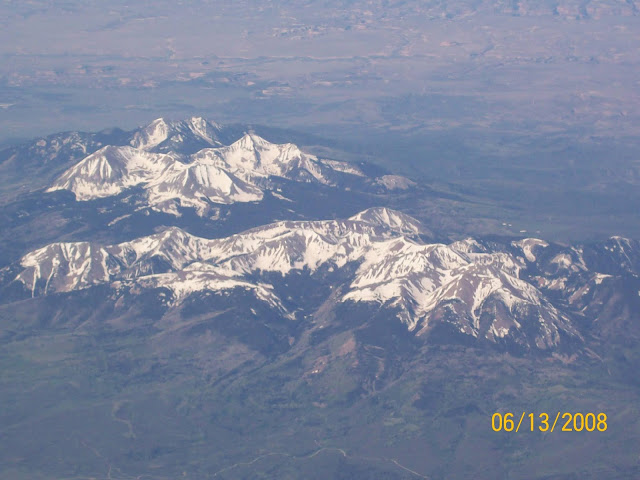 We flew in in June and snow was still on the Wasatch. 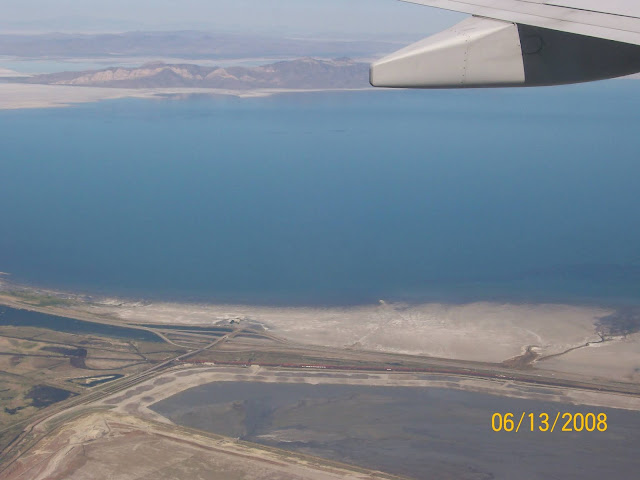 above is the Salt Lake, Antelope Island under the plane wing. 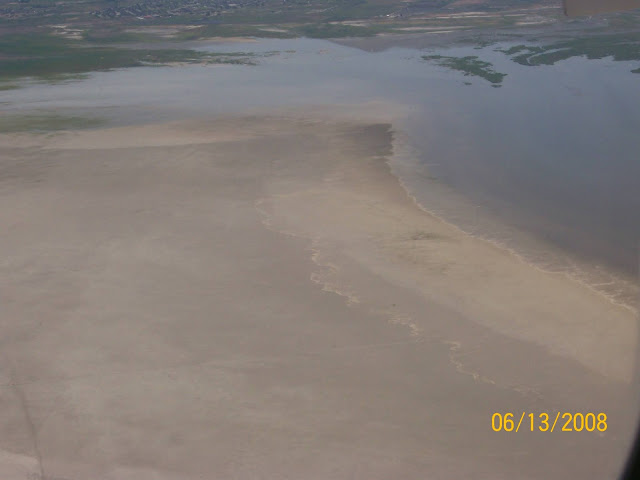 Many ponds, patches and lagoons around the Great Salt Lake 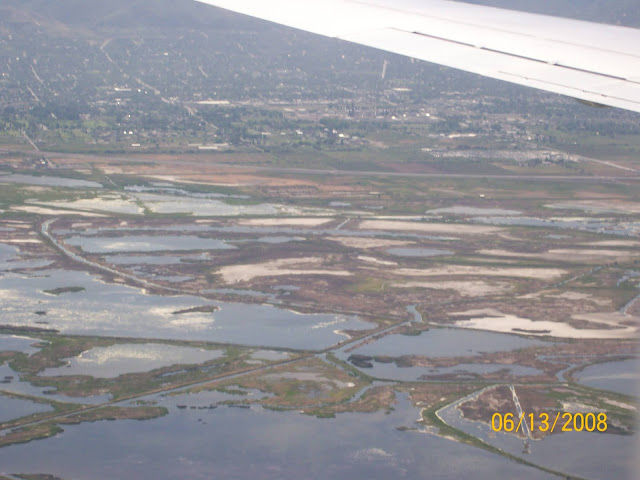 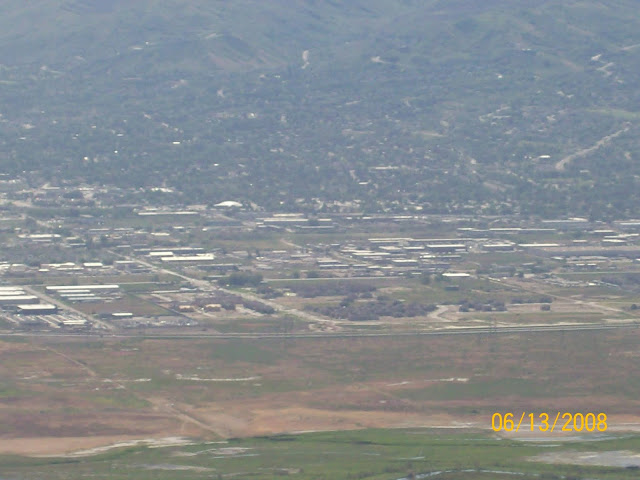 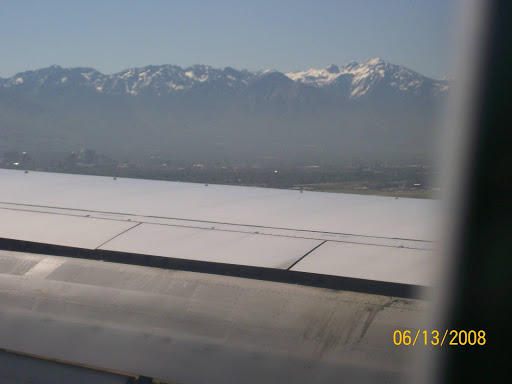 Again you see the snow on the Wasatch mountains in June that year.  Below is a flash back of Ben with Elsie and her mama Ashley. 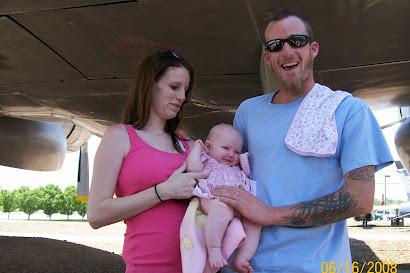 We really did enjoy the ride, Ben is a good driver. The drive up and back was in his company truck.

WOW! That was quite a trip and an exciting one...especially the one lane road with no guard rails. Grew up on those kind of roads as a kid. lol
There are some wonderful pictures here. So glad you could share time with family. Hugs- Diana

Oh wow, the view from that height is amazing. I'm not a fan of heights but surely is a lot to see there. Glad you didn't make the trip in your coach. Ben must be familiar with those roads and a seasoned traveler. Thanks for the view of our amazing country. Nice to see all the smiling faces too.Nothing better then q visit with family !

I’m glad you added that the drive up was in a truck. I would have been a nervous wreck on a one lane road with cliff hangers. I can’t do those. Maybe that is why Nick never attempts to take me up to the mountains. Haha.
Great photos. LookIng forward to see where you take us tomorrow.

I'm not sure I would enjoy the road to get there but the view at the top is amazing! Elsie Mae has surely grown over the years (kids tend to do that LOL). Looked like a lovely time with family!

Gorgeous vistas! ... but I'm afraid I'd be what they call a 'white-knuckle flyer' on that mountain road. I wonder if that route isn't closed to adventuresome (ie, stupid) tourists in the winter months?

WOWOWOWOWOW! At first I was wondering if you took the RV! ☺ I am a little ashamed about my history - I did not know about any Salt Lakes - very interesting. Especially the photo from the air! I enjoyed the lesson.

GREAT PHOTOS and description, So glad to see them and read the descriptions. Glad there was Family Time, it is important and a good Memory Maker !
Sending Love and wishs for Safe Travels when your "On The Road Again" ! Gary an Anna Mae

I'm not a fan of heights or driving up mountain roads but I enjoyed your trip up! We've been to Utah many times and it is beautiful out there. My son went to BYU. Even though I'm Mormon I don't have any desire to live out there! Glad you're having a good trip. I didn't think you'd be in your motor home up that climb! Take care!

WOW, sounds like that trip up the mountain was a thriller, happy Ben was the driver and a work truck the vehicle for that climb. So happy that JJ is getting to visit with the kids! Enjoy your adventures, Love from Chobee, Glenda

OK, my knuckles are white.......I do have an issue with tight one lane roads...gads ~!!! I did enjoy the view from the top. Gorgeous country you're getting to see. Thanks for taking us along. The Great Salt Lake is amazing!
Maybe one day~~~~~~~~~~~~~~but for now, thanks for taking us along on your trip. Anxiously awaiting the rest of the story...
loven'hugs from up north where it was another breathtaking day in our wonderful world. We saw Mom at the farm, her plentiful garden and roses, and life is grand. Bless you all on your travels.

In 2014, my grandson got married in SLC. My daughter , took us to the Great Salt Lake and we went to Antelope Island too. That was in Sept. of that year. It's pretty out there, but I would not like those roads in winter. I am loving the old gas station photos. Stay safe. Blessings, xoxo, Susie