Last half of Wyoming

Traveling through Wyoming the land scape has a drastic change as you  get into the Wasatch  Mountains that have been seen for the last 100 miles. I love the rugged terrain and people still live in it.

(We passed this train in Sinclair. Yes it is the headquarters of the privately owned Sinclair Oil Company. This train makes one long curve and still you see no engine or caboose)

I was still singing America and then included America the Beautiful. I have thought since crossing IL and IA that the fields of golden grain could be applied to the Cornstalk brown tassels. As the wind moved them they looked like waves of grain. 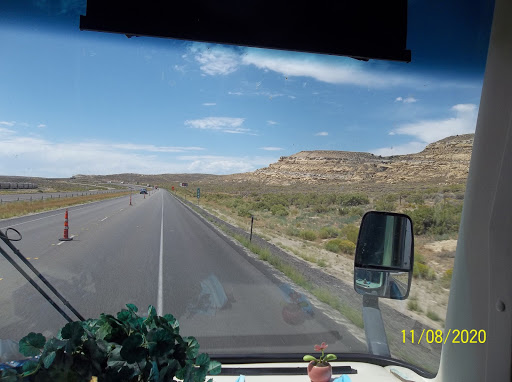 I feel so fortunate to sit at our living room picture window and seeing OUR world as we pass at 50-65 mph. Our view of rivers and lakes 'as we look over the concrete fence on either side' is awesome. I remember this view as a kid when steel support bridges were open down to road level giving a view of the rivers. As we drove over the Mississippi and Missouri rivers we could see the ships, boats and barges transiting those great rivers.

Now entering the Wasatch  Mountains their beauty is different from our Appalachians with their Green coats. These have scattered scrubs in place, and underbrush. There also some lonely trees standing against the constant winds. Their sudden outcroppings from flat rolling lands is impressive, I love it. 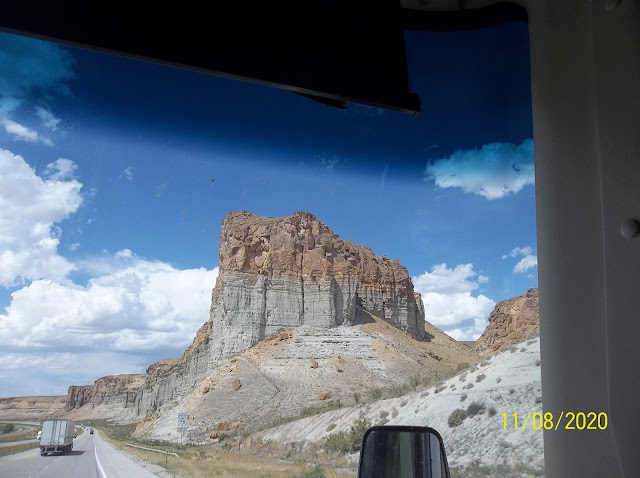 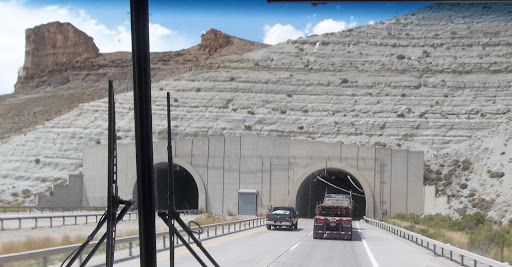 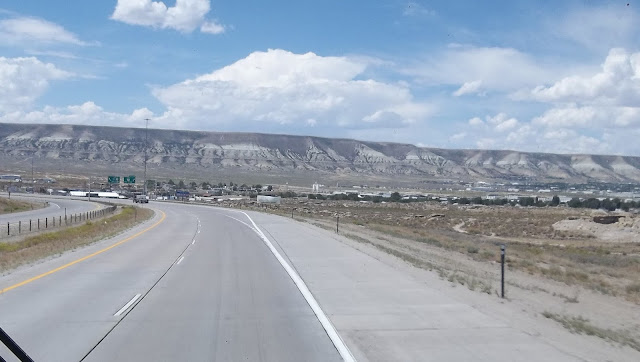 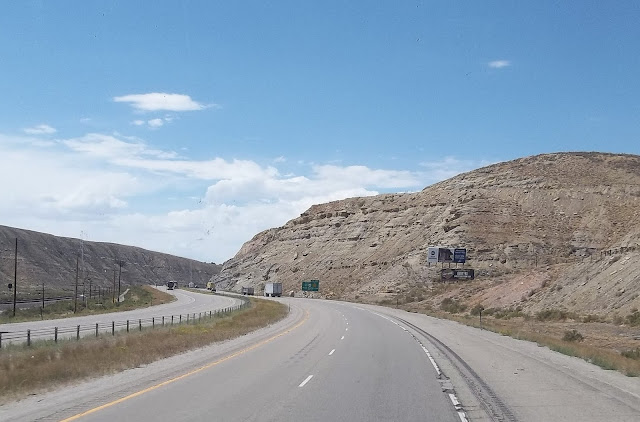 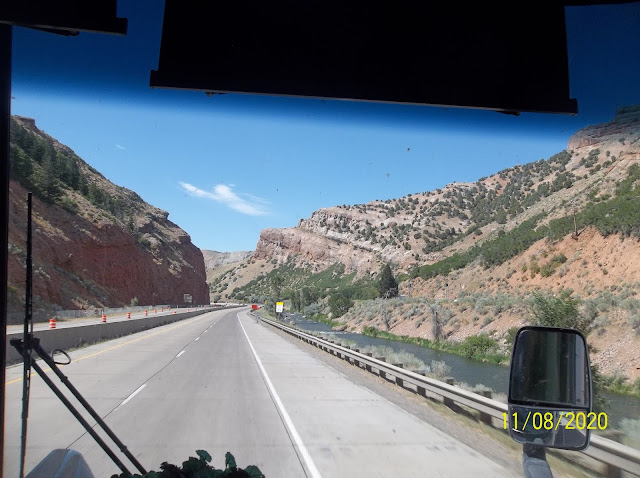 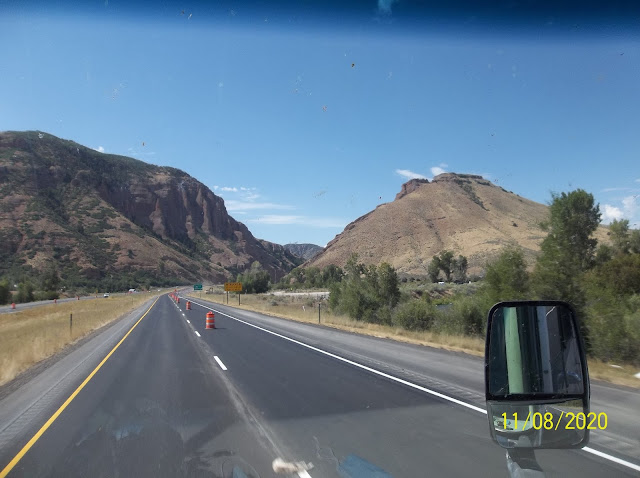 Winding thru the valleys and up and over the small mountains cannot be properly shown in 1 dimension. 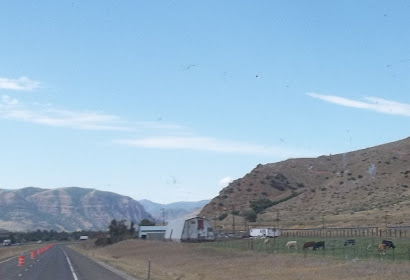 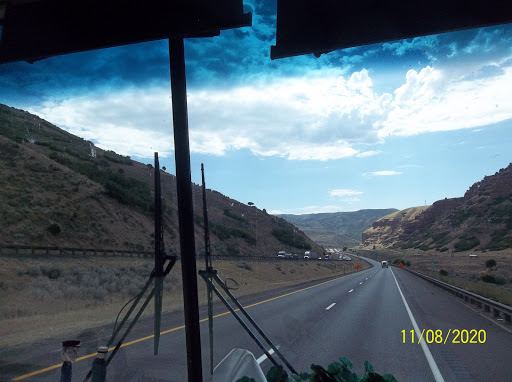 I especially appreciate the small trees that show a profile. It is hard to tell we are going down a fairly steep hill here. 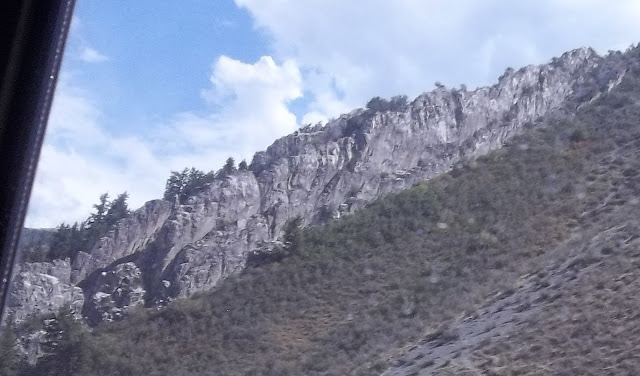 The shot above is called "The Devil's Slide". Folklore or stories say this is where the Devil landed when he was cast down from Heaven. It was a tough landing no matter where he hit. :-O 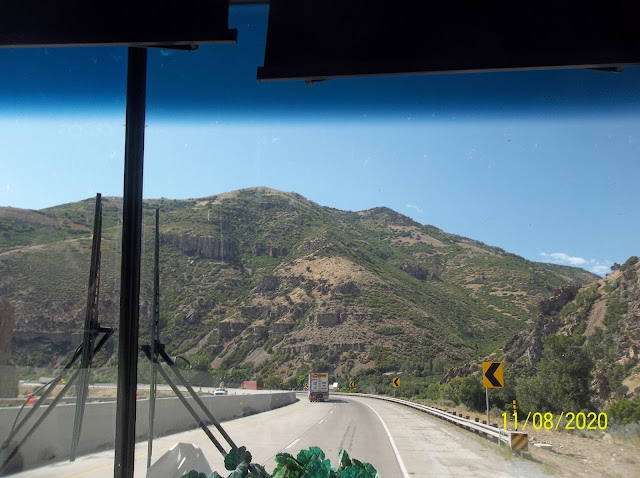 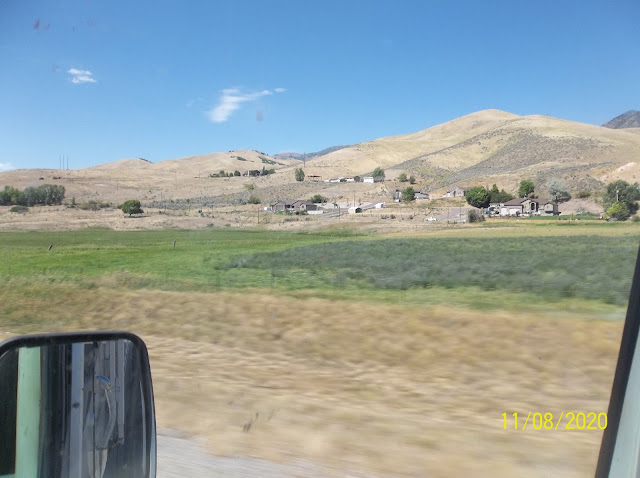 Above and below, we have crossed the Wasatch, and in the Layton, Utah area. The temp is near 88 and beautifully clear. 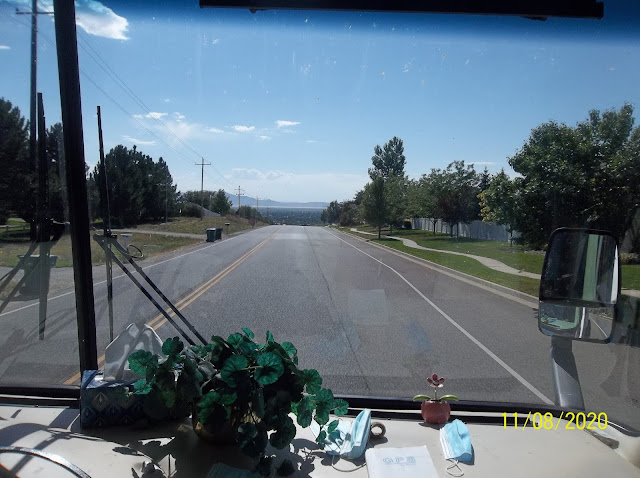 I won't post this many picture often (I hope, problem is I shoot over a hundred pictures a day and have to pick from the small thumbnails and I miss some I wanted to show.

Nite Shipslog
PS: For desert photography you must make at least one trip (then you will want more) to:

Professional Desert shots that most can be reached by hiking.

Great pictures! Share all that you want! Enjoying them all!

As a kid our family traveled across country a couple of times. It wasn't until I was an adult and taking my own kids cross country that I really appreciated the beautiful country we live in. Your pics have brought back memories! Our last cross country trips were in the air! Quicker but much less beauty. Stay safe!

The view from your window is terrific. How nice you can take the pictures and let someonedelse do the driving. The mountains are different from the Appalaicial we see around here, Yet the roads to tend to wind around them the same. So glad you are enjoying the trip and the scenery. You could never tired of views like that.

Oh post all the pictures you want, enjoy seeing the States I will never get to ! Glad things are going good with weather and Scenery, Glad to be with you in my "Armchair" seat ! Take care, Enjoy the Open Road ! Love from back east, Gary an Anna Mae

Keep sharing pictures! I love picture stories. Also this is as close as ill ever get to the west.

From the Eastside
Lisa

Now I'm singing along with you! ".....for golden waves of graaaaaain, for purple mountains majesty." Ain't it grand?!
Say, you can post as many pictures as you have time. I'm loving them all!

America is beautiful isn't it? I have never been to Wyoming or Utah. Your photos are beautiful - please share.

OK, I lost what I was writing.......as I was saying, I see the ' 3 Musketeers ' are covering a lot of real estate in a short time. I'm enjoying every second of it. The mountains are much different the Rockies and Appalacians for sure but every bit as impressive in their own right. I never did like the tunnels, they always scare me....as for the Devil sliding down the Devil's Slide, what a picture that must have been, and it's rightly named. lol Thanks for sharing. Loved Lily and her Dad's photos also of the deserts markings. Keep 'um comin'
loven'hugs from up north where the garden is bursting...I can barely keep up

Beautiful photo shares and you have me singing along too! I love America! I wish more people loved her like we do. I Love the old school or vintage gas stations. My aunt and uncle owned one for years and m y cousin Dan earned a nice living repairing cars. He owned his own airplane and flew every weekend to ski with his phamily. Sigh....
I am celebrating Aug 13 as my SIL Zach and his twin sister Alexa enjoy their 30th birthdays. I Also celebrate Left Handers Day - YAY for me! Heeheehee and our oldest child too. PLus my favorite childhood hero ANnie Oakley was born Aug 13, 1860. She still is a hero to me. Safe travels and enjoy the roadways.
HUGS across America to all of you XO XO XO XO