Skipping tonight's Gas Stations of History We passed so many Ford plants today I remembered a gem Lisa sent me. Her brother's '51 Ford: 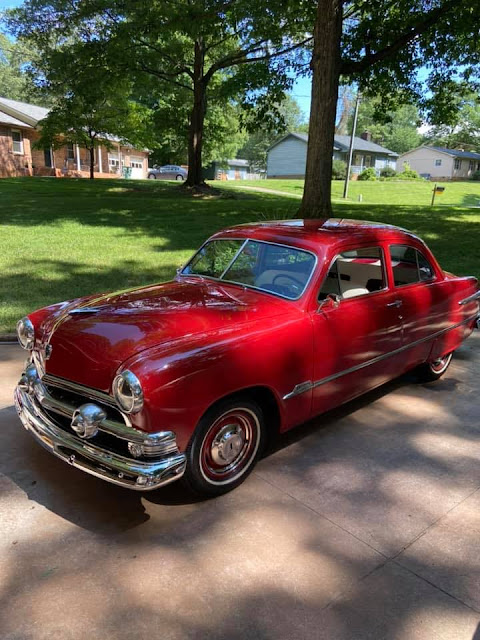 (can you see and remember the half moons on the headlights?, Thanks Lisa)


(Also posting early again, we have lost the net about 6 times trying to get this in.)

We left the park in the middle of Ohio farm country was great. We walked a couple trails while there..

This was the scene leaving the park, facing a recently mowed wheat or straw field: 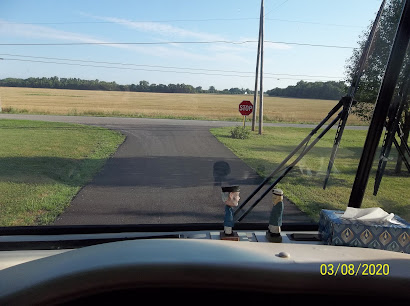 I had hoped to see at least one barn with Ohio painted on it. I missed them. We used to see several. (this from the net) 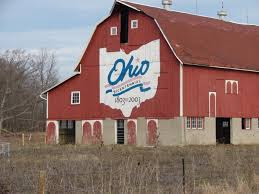 I believe it was in Toledo we saw the GIANT JEEP plant I was not ready and did not get a picture. 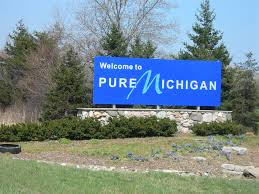 Entering Michigan the roads turned pretty rough. There was some construction with some very tight lanes. When you are driving an 8’ wide vehicle, 10-12 feet lanes between trucks and a cement barrier just takes a lot of concentration. I am used to it, Jack Jr has driven trucks, but not recently. He does a good job 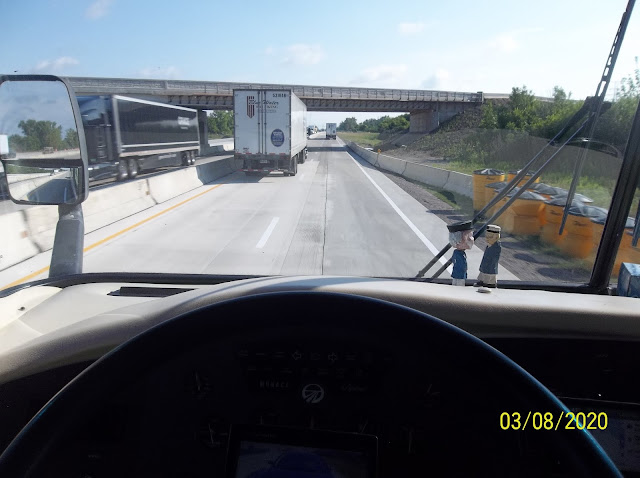 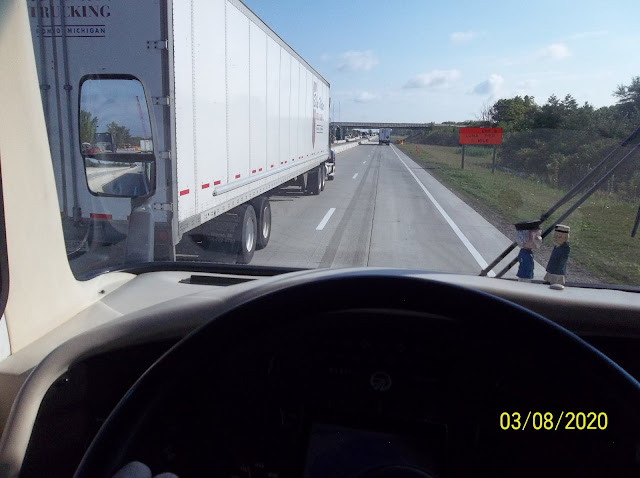 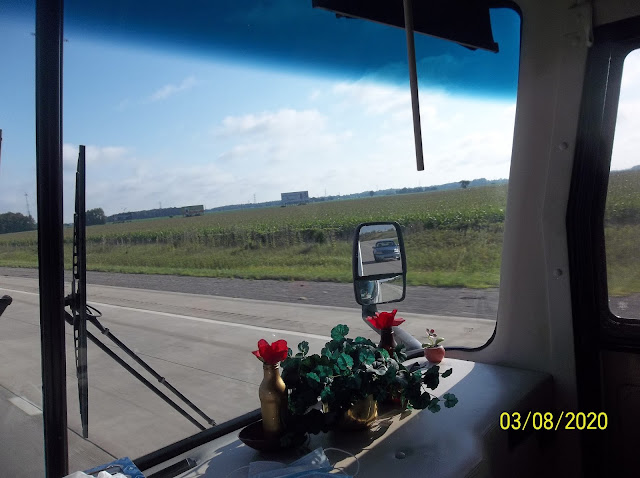 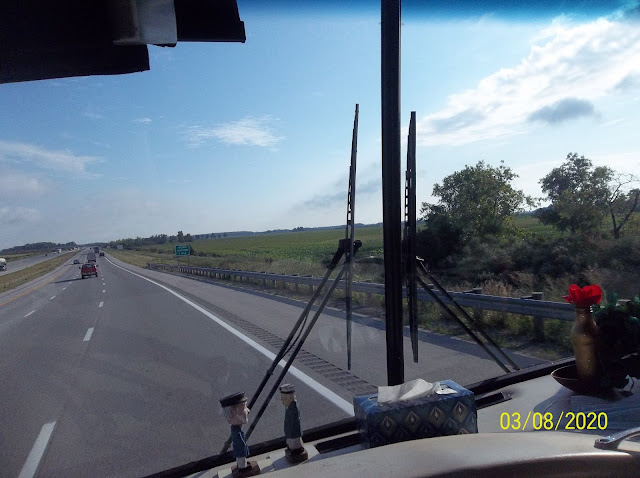 But then bridges and industrial scenes. 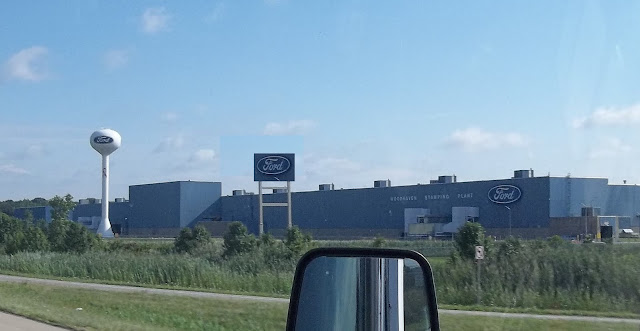 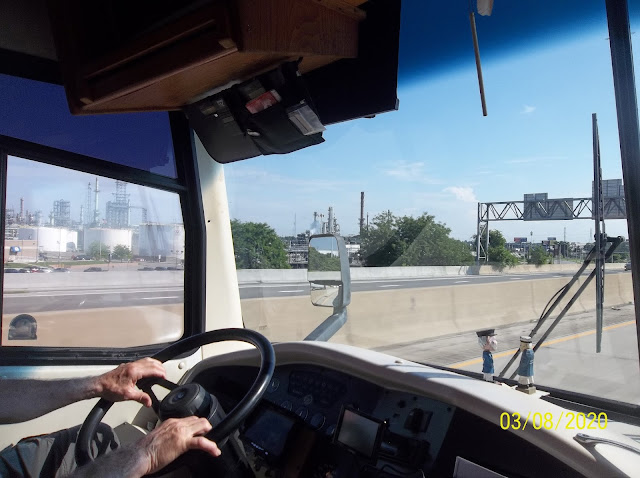 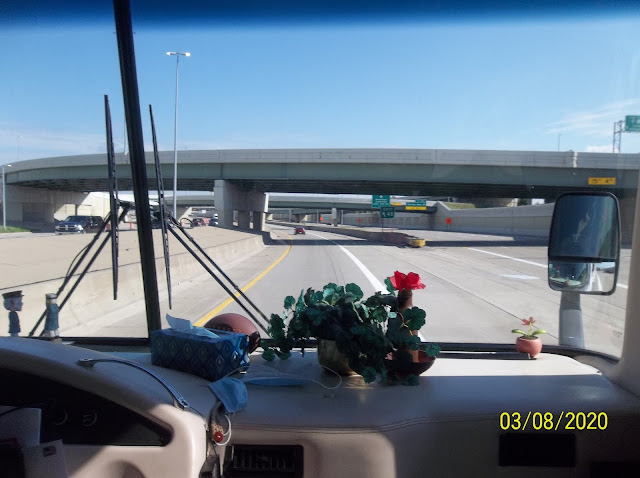 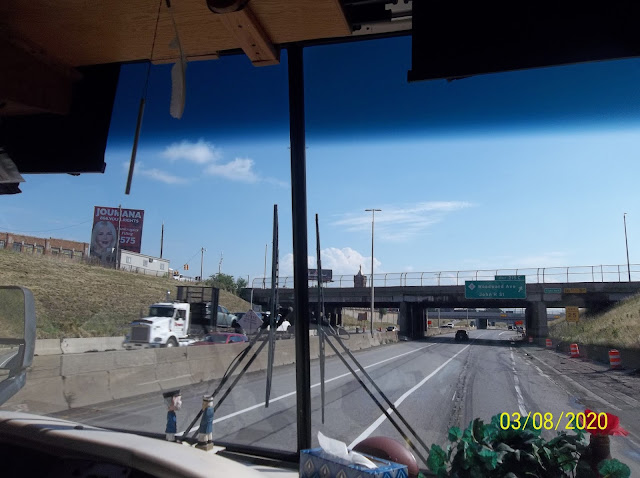 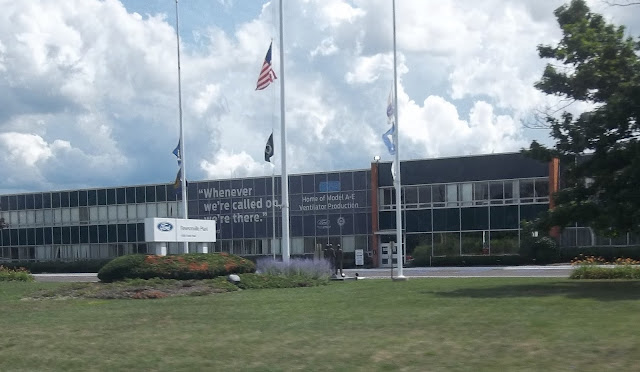 I remembered seeing this giant Uniroyal tire the last time up. 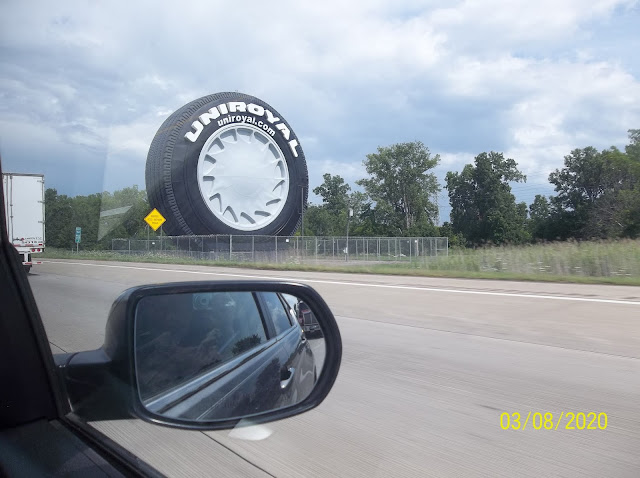 I don’t remember seeing this sign before does it mean when you get to Canada you ain't coming back? LOL: 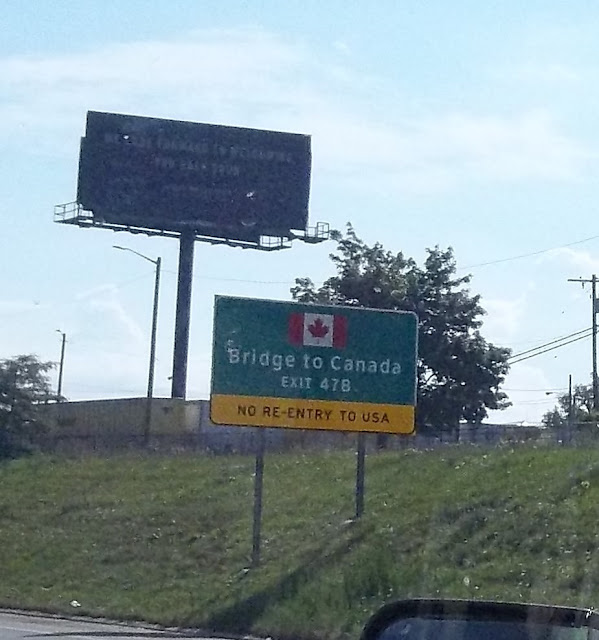 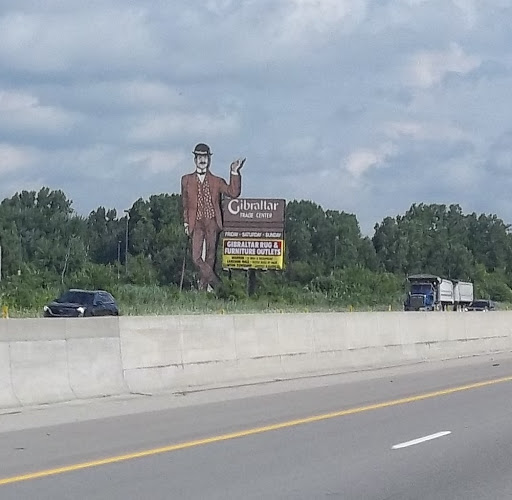 North east of Detroit the farm lands returned as we neared Canada. We will stay about 5 miles from Canada but not enter. This RV site is the tightest yet, but the staff is nice. . 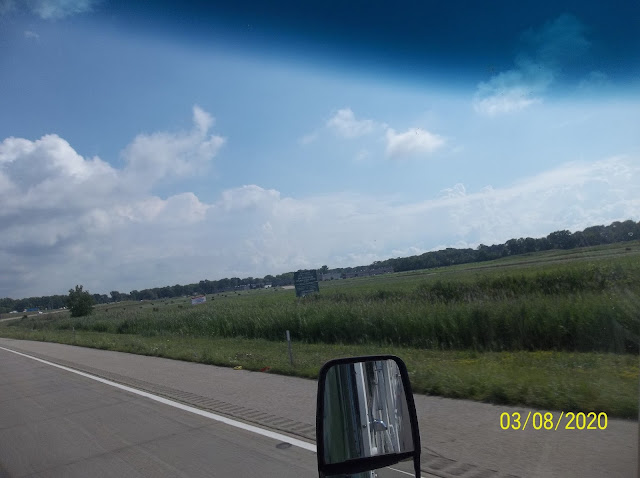 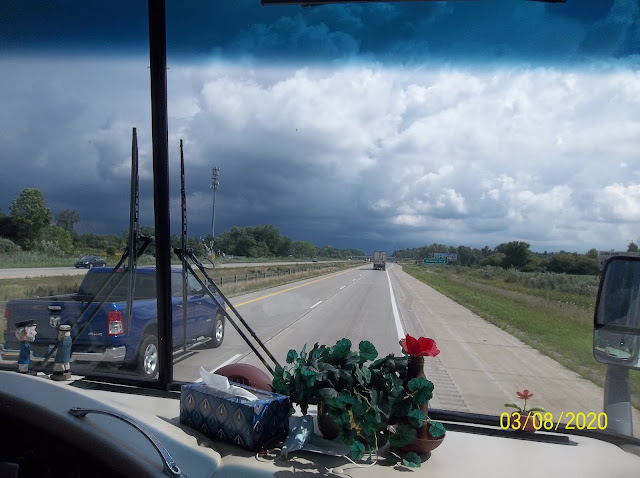 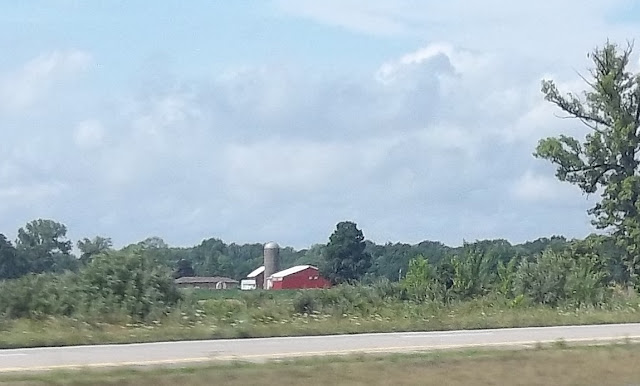 We parked and set off back to Ypsilanti to see Johnny 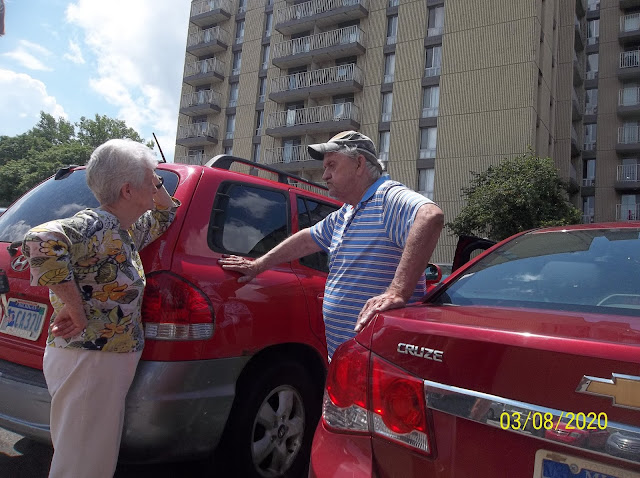 We spent some time chatting and made plans for dinner with him and his daughter Candy. We have never been in this area around Detroit (NE), and wanted to see this park. Down side it is 75 miles from Johnny. LOL

I can’t believe it, he is a year younger than I and he has turned into an old man.LOL

Enjoyed the sights! Never been to Michigan. Enjoy your time with Johnny and his daughter!

I have never been to Michigan either. The flat land did remind me of Illinois where I was born. Have fun with Johnny!

I have actually been to Ypsilanti. Went to the race track up there for some Nascar races. Interstate driving is fast, scary and boring. Glad you saw you BIL. LOL Poor O.G. Stay safe, Blessings, xoxo, Susie

Love the pictures post. The Canada sign confused me too. Haha. It’s nice to catch up with friends along the way.
Yall stay safe. We are heading to the coast on Thursday then maybe I will have something to finally write about.

Sounds like a happy reunion! Gorgeous country you've driven through, the concrete barrier is exactly like the one on from Clarksville, TN to Paducah, KY I drove (white-knuckled) in June going to Missouri, OMG, harrowing experience, glad you've got Jack, Jr :) Hugs from Chobee, be safe.

Sounds like a great trip so far. I know Sherry will love every minute with her brother. Strange isn't it when we don't see people, we don't picture them getting older too. I still haven't got used to seeing myself when I look in the mirror. Ha! You did see some beautiful country. Thanks for sharing all the pictures ! Enjoy Michigan and Johnny!

Thanks for posting the pictures, enjoying the "Arm Chair" trip with you 3. Interesting. Looks beautiful, Looks flat also ! You all enjoy yourselves, keeping you in our Prayers for Safe Travels and Health ! Love from back East, Gary an Anna Mae

That's so wonderful, y'all making time to dear friends and FAMILY. Yep, like my DIL is fond of saying, time is a thief.
Now I know I've been in Michigan, but don't recall a thing. So enjoying these pictures! Well, all except the part about passing 18-wheelers in those construction zones. Props to you and JJ for steady nerves. Me, I'd be in the back closing my eyes!

Have a super day!

Where in Ohio were you? Looks like all is going well.... thanks for the update!

Hey, You're headed to my neck of the woods. Are you still in the Upper Michigan? Coffee's on!

I'm so glad Jack Jr. is with you for some of the driving, especially thru miserable, tight traffic. Well done. Once you get further north, the scenery turns to more hills and valleys, gorgeous every inch of it. If you're on 75, cross the Mackinac Bridge and go all the way up to Sault Ste.Marie on the MI side to watch the ships pass from Lake Michigan to Lake Superior at the Soo Locks. It's amazing. So nice you have valuable time with Johnny and his daughter. I'm sure Sherry is treasuring it so much. Enjoy your trip. I'm traveling with you and loving it.
loven'hugs from up north WI where it's been lovely weather to garden and make firewood.