Those Gas Stations:
I actually used one of these pumps in rural Georgia once. You hand pump the amount you want into the clear glass tank on top, then it is gravity fed into you tank, not pumped! 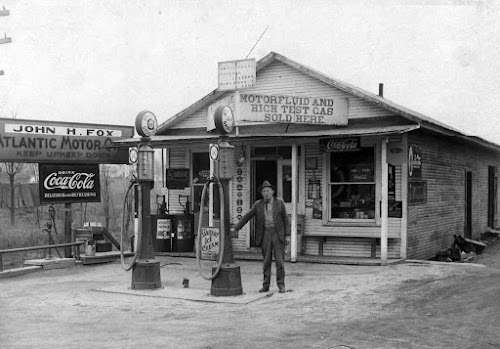 For Wednesday’s stuff (As we wind our way back to NC):
Boy, do I remember salt cured ham! That was my daddy’s favorite meat methinks. At hog killing time mama would always save some fresh ham for Shirley & I, we could not stand the taste of that cured ham. Funny, over the years I actually have learned to enjoy it, ‘acquired the taste’ as mama would have said.
As a kid Bobby O’shields (one of my double cousins) borrowed a ‘Blatz’ beer from his dad’s store and we ran to the woods to drink it. ERG NASTY… As I grew older I actually acquired a taste for beer.
Traveling the world I have enjoyed tasting/trying the local foods. Some foods in Turkey did not fit my palate. I enjoyed food in Sicily and Italy. As a Sailor you get a chance at a lot of ports to sample ‘foreign to me’ food. To be honest much I do not remember by name because it did not become part of my diet.
If you are from the south, grits are a staple. It is something I like, but understand when others don’t enjoy the ‘bland’ taste it holds. I mix mine with eggs.
(food pics from the internet!) 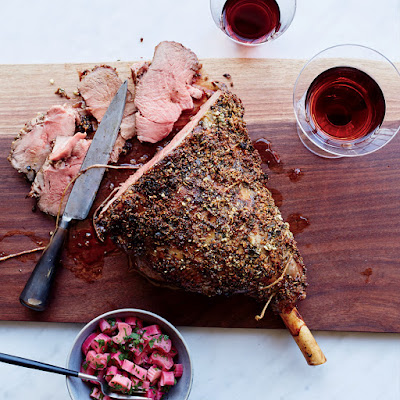 Betty mentioned in a blog once, she was gonna try cooking ‘Leg of Lamb’; a food that I have never tried. I was once in a heavily populated Jewish area (Near Silver Springs I think) where it was being served in a buffet line, I determined to try it. They ran out before I reached it, so I still have never  tried Lamb nor goat (that I know of, because in the Mediterranean area I have eaten a lot of things I had no idea what they were! HA!) 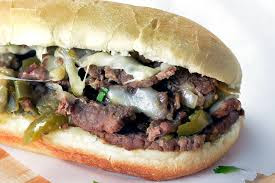 In the 70s Dan Doughton and I were sent to Philadelphia as consultants for a book on Naval Intelligence. Dan took me to a dive on the waterfront and I tasted my first Philly-cheese steak sandwich. It was delicious. Over the last 40+ years I have tried to find one as good and had no luck until this trip when we accidentally stopped at a café in Leesburg. I took a chance and tried the Philly sandwich, it was GREAT. I complimented and tipped the cook. 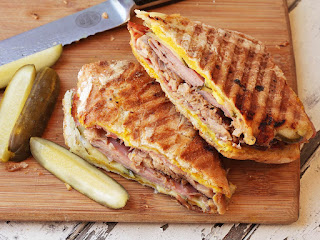 Sherry had one of our favorites also, ‘The Pressed Cuban.’ It was good, but not quite as good as the ones in Cuba of course.

Many of you bloggers mention food I have never tried nor even heard of; as you describe or show it, my mouth waters. LOL

Nite Shipslog
PS: We stopped at 'Sam's Seafood and Sandwiches' on 27 in Leesburg because Sherry thought she remembered it from when we lived near here years ago, she was two blocks off and I was happy. LOL
PS2
I was premature in my blog before about leaving without purchasing a place. At about the last minute we found a place we both liked, location & price and signed a contract . Hopefully  pictures tomorrow.

There are a few foods that I acquired a taste for as I grew older. They include, Cilantro, sushi, and watermelon. I have never been able to like beer. I will taste one sometimes just to make sure. Just yuk.
I’m excited to hear about the new purchase.

I think the more we try the more we aquire a taste for. I like clam chowder and clam dip bug unless it's fried clams, I really don't like them. But I still keep trying. So glad you found a place and am looking forward to seeing pictures. Good for you finding a place to winter over!

Wow, congrats on the house!! Can't wait to see pictures! Thanks for the shout out. I'll have to blog about it when we cook the leg of lamb this winter. Son's restaurant cooks a lot of veal recipes but it will be our first attempt at lamb. Its fun to try food from different parts of the country and for you, Jack, different parts of the world. Some look palatable but a lot look like "I'm not eating that" LOL. Grits I can "stomach" about once every 2-3 years.

Congratulations on the new house!!! I can't wait to see the what, where and when's! This is quite an interesting post. The only things that I learned to like are escargot and tomatoes. (Not together, LOL) The rest are "one and done!" -- For instance? Venison, oysters, sushi, lamb, liver and most fruit. Oh ya, and beer. That photo of the Philly cheese steak has my mouth watering!

I enjoyed the Post, I like Lamb, but I eat it usually cut up and mixed in other foods, I can not eat Olives, any kind, I Love Grits !! Excited to see the "Florida House", we are busy, Anna Has Cataract Surgery in the morning, left eye, and in 2 weeks another one on right eye, I have surgery next week on both ears to see if we can restore some severe hearing loss, You 2 get settled in and relax, Hot, Humid up here !!! Take care, sending love and blessings your way, Gary an Anna Mae !

Congrats on your new home - can't wait to see it.
You know I don't know the difference between cure and regular ham - or maybe I have different words for it. Cure is salty?
I bet with all your travels you have had a lot of variety of foods.
Ever have a Chicago Hot Dog?
Sandie

If you recall, we butchered pork, made sausage (I got to sew the casings and grind the meat) and also cured hams in the old smokehouse behind our house. This read made me smile all the way through! With regard to grits, I have a recipe for grits, egg and cheese casserole that made Mom's brother gain a few pounds when he flew in to visit IrmaNee from Nevada. They came to Chobee for brunch and I "put on the dog". I miss those days.

I  was diagnosed with stage 3 breast cancer in August of 2015. A precious friend told me about Dr james herbal mix in,She gave me his contact number and email address,I contacted him quickly so he give me guaranty that his herbal medicine will cure my cancer and i will be heal forever I said Okay.I ask him about the process for the cure,he ask me to pay for the fees which i did and within 5 working days he sent me the herbal medicine then he instructed me on how to drink it for two weeks to get cured.I told Gomez my friend about the herbal medicine so he gave me go ahead to drink it.So after drinking it for two weeks i was cured I'm so grateful and i promise i will recommend anyone with cancer to him and that what i'm doing.Dr James Herbal Medicine makes me believes there is a hope for people suffering from,Parkinson's disease,Schizophrenia,Cancer,Scoliosis,Bladder Cancer,Colorectal Cancer,Breast Cancer,Kidney Cancer,Leukemia,Lung Cancer,Skin Cancer,Uterine Cancer,Prostate Cancer,Fibromyalgia,a
Syndrome Fibrodysplasia ,Epilepsy Dupuytren's disease, Diabetes ,Coeliac disease, Angiopathy, Ataxia,Arthritis,Amyotrophic Lateral Sclerosis,Alzheimer's disease,Adrenocortical carcinoma.Asthma,Allergic diseases.Hiv_ Aids,Herpes,Inflammatory bowel disease ,Copd,Diabetes.
Here Is His Contact Info......[Email...drjamesherbalmix@gmail.com............ Whatsapp...+2348152855846]