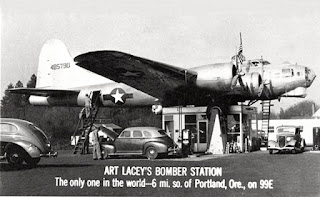 For Monday’s stuff:
WE have driven three tanks of gas looking around this area. N/S about 140 miles and E/W40-50 miles. Roughly 30-35 houses. More gas than we have used previously this year.
Well we did find one that we both liked. It is very nice and plenty of room for the coach. 3/2, on ½ acre, two playhouses for me, location was good, price was Less than $60K.
Contacted the Realtor, he had just signed a contract on it. We have always TRIED to use the philosophy, all things work together for good, so will assume it was best for us that it was sold.  Maybe someone else needed it more than we, or the termites were just waiting to show their mean heads. ;-)  I like to think there is something better down the pike………..  or we just don’t need it. ;-O
I think many times when I am held up at a traffic jam, etc, that it just might have prevented me from being in an accident down the road.
One example I can never forget. We were driving through St. Louis when the kids were very young, no seat belts of course. At that time the Interstate System was not in place. There was a car in front of me taking up two lanes. I told Sherry the next traffic light that stops us I will pull alongside and when it turns green, I will safely get in front of him. As we slowed for the next red light a car was crossing the intersection in front of us under green his side, when a truck loaded heavy with roofing shingles ran the red light coming toward us and T-boned the crossing car. The car was hit so hard it was slid on its side and ended up exactly where we would have been, had the car not held me back, that car got hit. We did not get a scratch, but when it was over I realized I was pressing my brake with all my might trying to stop the car sliding toward me. LOL
So, we will return to NC without anything definite in Florida. We can handle that and continue the search in the Fall, if we come down.  Life is good and we have honestly had fun and learned  lot more of rural Florida by shopping. LOL

Wow, what a story you shared that you were spared any damage or injury to you and your family Jack! I truly agree with you that there are times like this and the house that didn't come to be this time around in Florida where God is watching out for you and what could have been. Sounds like you had fun though looking at things and getting to know the area more! Who knows, maybe the contract will fall through and the house remain available?

I agree if it is meant to be it will happen. Looking around can be fun and also costly when it comes to gas. Hopefully you'll find something before winter sets in. The perfect place is there you just have to find it. As always safe travels to you and Sherry!

I agree - hopefully you didn't get it because it wasn't meant to be for you.
I still don't know if you are moving there permanently or just a winter home.
I guess you will continue to look.

It was not supposed to Happen for a Reason that you didn't get that house. My Dad used to say and I also do "A Day Late and a Dollar Short", Grandpa Jones played a song on his Banjo called "A Dollar Short" !!! Still Temps are right up there and it is Humid, Sunny and Dry ! Farmers are starting to get into a "Drought" ! Rivers are down and noticed they are backing the Black River, Deer River and Oswegatchie and Grasse Rivers back up to hold water for Power Production ! Have a safe trip home, take care, Sending down Love and Blessings, Gary an Anna Mae

I'm with you. God keeps you safe for a reason.

Ohhhh no! I hope that realtor will think of you in case the other offer falls through. All the same, I'm glad to hear you kids are having a good time traipsing around the Sunshine State.
Like my disappointment about not getting that house in Wetumpka, God had a better idea! Safe travels!

I've had similar things happen to me.

I'm a firm believer that you are where you are supposed to be.

Agree with the above comments, for the third year in a row, I've had drywood termites invade ~ that's with 61 new sheets of plywood under a million-dollar new metal roof. Had the rest of the building "almost" fully stuccoed last week in hopes they were coming from outside. The rain held the crew back from completion ~ but soon. I'm still thinking I can make the structure home. Wishing you safe travel, that seas and sails thing you say :) Love from Chobee, Glenda

for whatever reason this deal was not part of the plan for the two of you. fingers crossed you'll find the right place in the fall.have a safe trip back to nc.

I feel the same way you do about being held back or something not working in your favor. It’s always good to keep an optimistic view. Things do (or don’t) happen for a reason.

Have a safe trip home
Lisa