The Nice people in this country

Gas stations from the past: 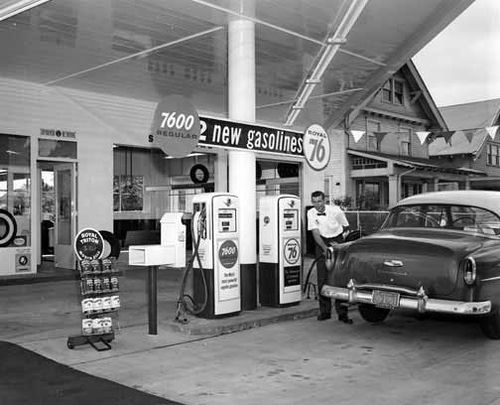 For today, Friday from NC:

We paid down on a trailer as I said awhile back. The closing was to be online. That required notary and wiring funds at closing. Sherry called for two days to see what the process would be at the bank. She was put on hold every time, and then after a while it hung up.

So once the papers were received and printed. We signed and initialed where needed without notary. Then to the bank which is locked with a note saying call for appointment. So I knocked on the door. About that time a man came up and stood back. Sherry asked if he had an appointment. He said, “Yes, I called yesterday and had no problem.” Sherry explained what had happened to her with the phone. When the manager came to the door he told us it would be impossible without an appointment.

He turned to the man and asked if he had an appointment. He said yes but mine is not an emergency, I give my appointment to these people. The manager was a little bumfuzzled, and said I will be right back. After a couple minutes he came out and told us all to come in that he thought he could work it all out. He did.

It is a breath of fresh air to meet someone like that gentleman. Sherry said to me, ‘that is something like we would do,’ and it is. BUT not much makes you feel better than having contact with such a person. It still makes me feel good.

WE have some wonderful folk in this country. NOT everything is gloom and doom.

Good Post, Yes, they are some good people still left in this world, Hope things change soon, I am still careful where I go and I wear a Mask, Up here in the "Land of Taxes" in New York we were lucky, now our Cases are coming in more often and it scares me. Oh Well, Hope you have a good weekend, Prayers for God's Healing Touch for your finger !!!! Take Care and sending down Love and Prayers for an easy Closing on your "New Place" ! Gary & Anna Mae

It's good to have good people like that by your side. Escpecallly in these uncertain times. Hope all goes well with the closing you you''ll have that winter home to enjoy. Sounds wonderful when things go as they should.

WOW. I love this story so much! Hopefully, that manager learned a lesson about doing the right thing. Have a GREAT day!

Gee, that was a wonderful gesture on that gentleman part. Thank goodness for kind people. I went to our bank this week...the door was lock, I started reading all the papers stuck on the door and the manager came and took me to her office. She checked out what I was wanting done and it was a peasant time. Blessings, xoxo, Susie

Thank you Jack for sharing this story. We need to hear more of these!! Glad you got your business sorted out too!

WHAT AWESOME PEOPLE THEY WERE! Love it.

I bet if every good story of kindness like this one was printed there wouldn't be any space left for the negative and a good feeling would prevail. Glad it all worked out. I'm sure you've done lots of good deeds and it's nice when it's payed back...not all pay backs are hell!

Just catching up on my reading, and the story of the calls to the bank sounds like my experience with that, OMG. My bank is doing the same thing, they're worse than attempting to get through to the IRS :(

Awe this was a sweet post. I love to hear there are some nice people still in this world. I know you and Sherry would have done the same.