We attended a church in Deland, FL this morning. One of the greeters asked if we were visitors, I said know we are regular attendants, once every two years. (This was our second time in a few years).

We ate at Popeye's and I got a chance to do a trick for a cute Hispanic kid.  He was tickled to see the gold dollar disappear then show up in his ear.  Nothing is more satisfying to see a smile on a mannerly kid.  Mommy and dad also got a kick out of it. Leaving I got to show the kid how I can turn on the red lights on both of my implant devices, the kid giggled.  Sherry walked over and side to he parents, "He is such a show off."  (Guilty as charged when kids are concerned.)

At home I still got in 9 hours on our new home.
(We d not plan on taking this road!) 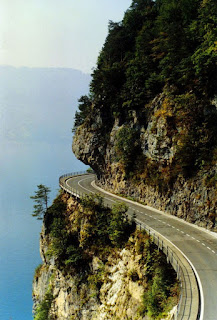 I sometimes think of putting together some 'shows' and announce we are available again, but I know that is something of a pipe dream. I think of my mentor, Ray Campbell.  He was the best with kids, and a great chalk artist.  He taught me some great pictures and many 'trick drawings' that the kids loved. The last time I saw Ray, he didn't know me. I sat across the table at the nursing home and talked. Suddenly my friend of 75 says, "I'll kick your ass!"  I was in my 50’s.

I said, "Hey Ray, I know you can but there are ladies present and it would upset them."

He thought on that a minute and said, "Ok, I'll let you slide this time, but remember I can do it."

Ray had been a boxer in his younger years and used his experiences to teach kids. He would challenge boys to jump rope and they would laugh as he expected, then he would challenge them. All of a sudden it wasn't a girl's game. Boxers are miracles workers with a jump rope."

Why I mention Ray at all is his actions before the nursing home. I dropped by his home and he wanted to show me his latest 'stuff'.' The picture he drew was only a shell of his former self. A ten year old could have done as well, but he was sure it was going to be a 'hit'.  I DO NOT WANT to do that.

Ray died a few months later and I attended his funeral. The church was packed. The minister in describing Ray, pointed to the mural at the baptistery behind him and said, ‘Ray was an artist, obviously.’ Ray had painted it.

Ray’s oldest son, gave me much of Rays chalk and a great case to hold the chalk. He said,  “Dad told me he wanted Jack to have this.” I was dumbfounded and honored.  I still have it in the basement of the Motor home. I used it for years.

I think Ray realized where the talent laid at the time and it laid with you and he was honored to pass on his supplies to you.

Great post Jack. I always liked magic shows I'm sure you can still put on a great one for kid's,and grown ups. It had been a little cooler up here I'm hoping it will stay this away for a while. I have been having a hard time getting to sleep with my leg so I'm up early reading blogs. I'm thinking it's about time to get it checked out.😓 Don't work too hard. Jean

I love how you always have fun no matter where you go even though as Sherry says, you are a show off. Showing off in a good way as you do makes life a little more fun. I had the pleasure of seeing a chalk artist several times when I worked with the youth group at church and young and old always enjoyed it ! Now that you can have a more permanent spot it might just be the thing to do. Of course I know your plate is full right now with all the settling in there, but later on it might be fun!

Ray was a wonderful person. When I was little and he would see me he would say here comes Strawberry Blonde. We have know some great people in our life time. I remember the chalk talk about "The Little House by the side of the road", I think that was the title. I like the old saying we have been there and done that and "THAT'S THE TRUTH'.

Well, that Betty went and stole my thoughts again ... LOL!

You know, I don't recall ever having seen a chalk artist! Ray's not recognizing you had to come as a punch in the gut? I LOATHE how Alzheimers steals folks minds and their loved ones' hearts.
Your 'inheritance' is really sweet. I bet it means the world and all to you.

In a way, I'm glad he still thought his pictures would be hits, ya know?
Even though I'd not want to feel that way, or speak that way about myself.
Conflicting, but what I feel.

I love this post Jack. You did good.
R

It would be fun to see one of your art shows.

You showed our grandson the gold dollar trick, the magic color book and the dime tricks. He still remembers. He also remembers showing you His trick of how to put a frog to sleep in the palm of his hand...I think the kids in your new hometown would get a kick out of your trickery and chalk drawings. That is, however, after you get settled in. Every man has to take a break tho, right?
Have a great week........we will too