In 2004 we thought we would settle down, maybe buy home with a foundation, but keep the motor home.  We found a nice spot  in Tavares on Lake Dora. Shucks, we were on the southern entrance to the famous and beautiful 'Dora Canal'.

Within a few months we were hit by three hurricanes.  We sold the place in about 2 years because it did not move and we were missing the TRAVELING.

NOW again, about 8 years later we buy again. What happens immediately? Hurricane Matthew plans to show up and has NO INVITATION!  When you see or hear Sanford in the news that is about 3-8 miles southwest of our home.  The house is about 26 miles from the beach and 23 miles from Orlando. 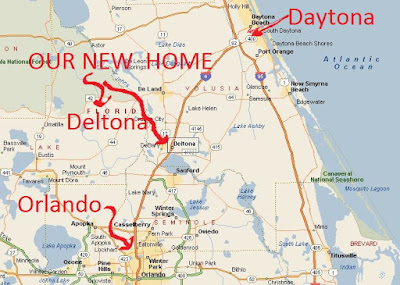 The lower right hand corner is Titusville, the outland is Cape Canaveral

We are settled here at Wildwood, which is a little west of center of the state.

I spent a good part of the day reinstalling and adjusting the 80lb jack I had to remove when we got stuck.  It is back in place and working.

WE will be here until the storm passes Daytona, then we will move to Orlando and go check on our home.

Thanks everyone for the concerned phone calls, texts and e-mails.  But we are about as safe as we could be in the state of Florida.

Even in North Carolina on our anniversary Hugo came calling. We slept through the night because I did not believe a hurricane could come 200 miles inland. Boy was I wrong. WE had lost about 15 large trees on our big lot and a few shingles, when we woke up.  WE were blessed, not a tree touched out house.

So this is not our first rodeo, but no one can predict exactly what a hurricane will do. We will try to relax and let nature take it's course, IT IS GOING TO ANYWAY AND WE ARE NOT GOING TO STOP IT. Storms miss some folk who are praying and devastates some who are praying (but we still pray).  HE said, "It rains on the just and unjust!"

BUT of course we do appreciate your support in thoughts and prayers, it would be a little ignorant to turn prayers down. Small world, but hubby when he was young and his dad was in the Navy, lived in Sanford for a few years :) (I might have already told you that, blame it on senior brain :)

Just remember where Jesus was in the middle of a storm. He was asleep in the boat. He trusted his Father, and I know you and Sherry are trusting God too :)

Stay safe and I hope Matthew takes a wild turn back to sea!

I'm glad you where you are relatively safe. Already they say that 245,000 are with out power there in Florida this morning.. You all are in my thoughts and prayers. Take care!

Glad yall are safe. Yea, I slept right through Hugo. Woke up to a mess around the state! The aftermath can be worst than the storm. I pray for everyone in the path of this storm and those clear of it that worry. My brother inlaw lives in a camper right on the beach in SC. I think hes boarded up and staying inland till it passes.

I'm in NJ & some people are already worried here. I don't pray, but I will be thinking of you(I suspect that rarely helps, but it is all I got).

I had many calls wanting to know if You and Sherry were safe. We are all
concerned.. Our family has been through many different things and have
weathered the storms. I will keep checking and watching storm.

Just checking in to see where you're at ... and if the wind took your hat. Be safe my friends and like it or not... you're tucked into my prayers :) ... I know you like it.

after reading your history with Hurricanes, I can see moving to Wildwood in your home on wheels --- looks like a really wise move! we dodged a bullet here, gratefully. Take care and here's hoping the new home is weathering the storm.

I''m glad y'all are safe but I must tell you your neighbors are calling y'all the hurricane gods :)
R