Yeah, a Trash can, ok a Garbage Bin.

We got our trash can today!
There are words from my youth that are out dated, How did that happen?  When we were in a town that provided trash pickup in my youth, everyone had a 50 gallon drum they rolled to the curb for the trash men to dump. I always wanted to be strong enough to lift a 50 gallon trash can and dump it in the truck.

I don't think I ever passed being able to lift an empty one. The drums were rolled around by the rim. Some trash men could roll two of them. The base of the drum became sort of a wheel at an angle. But it was a TRASH CAN! 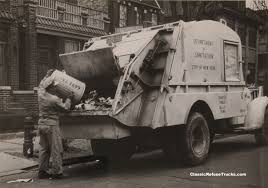 Dibs or Tips was used by a kid who didn't have the nickel to buy a Pepsi, but his friend did. As soon as the friend started to drink the Pepsi, the other dude would call 'Dibs', meaning 'save me a drink of that Pepsi.

There is a young man who lives down the street. He has stopped by several times looking for work. A very pleasant guy. I cannot remember what it was, but once after he left, I went inside and Sherry had heard the conversation. She was laughing. "That kid had no idea what you were talking about. He is too young to have heard that." OUCH

Okay, another good day. The shutters are up, the doors have the first coat applied. Oh yes and we now have a trailer. Thanks to Glenda down in Okeechobee, I learned that here in Florida, unless the trailer weighs over a ton, you only need a tag, no title.  Good news.

I also found the sewer line it exits the front of the house and is not deep.

So goes our world. 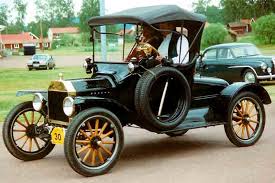 !915 Ford Runabout above and the Pepsi truck that brought those nickel Pepsi's to the store. The back was always open, and they seldom lost a drink. 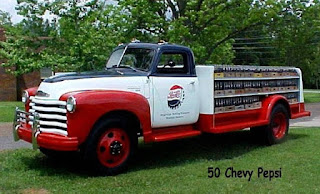 After we got finished passing around my tablet with this post, Tom's grinning and telling me about the 50-gallon trash cans that used to sit in his alley in Chicago's south side. Only, (he says) their lids were usually chained to something to keep the cats/rats out ... and other folks from stealing the cans.

Oh, and he remembers that Pepsi truck too!

I still use those old fashioned terms like trash can. I have to tell John sometime that they don't know what you're talking about.

Wow, I can't imagine that is how much a garbage collecting man makes in New York! But then how much does he have to spend for this and that? Fascinating. I do remember the days, and they weren't that long ago, with the men collecting the trash themselves instead of now automated. I also remember that trash would get collected twice weekly instead of now once weekly, probably because of the weight restrictions on the cans. I also remember being involved in a trash collection strike when we lived in Montana. It lasted about 3 weeks and the city had to set up big bins at different parts of the city for people to bring their trash too. What a mess!

We use to have to buy our own trash cans, but now they furnish them and use a garbage truck with a lift to pick them up. It causes a lot of people to lose jobs I'm sure. I just say I've got to go take the garbage to the road. I don't know what they call them but once they tore a wheel off and I had to call them for a new can. Maybe a cart. Ha. Take care. Jean

Our trash cans are now on wheels and the garbage truck lifts it up to empty the bins too. We managed to get a lot cleared out of the attic and basement this weekend and an old fashioned truck will come by and pick up all that is on curb lawn now with the men doing the lifting. I have noticed when talking to my grandchildren it's often like we talk two different languages sometimes. Ha !

I remember those fifty gallon trash cans. You'd use them until they rusted away. My dad used to work for a chemical company and would always bring home empty drums. Wed use them for trash and even burn the trash inside to limit space. That was in the country. Those within in the city limits, they had to use aluminum cans.

From miles away
Lisa

Being the country girl way up north of anywhere, we burn our paper garbage and take the rest to the town hall's garbage bins, each with it's own purpose, paper, green glass, clear glass, trash.......hate it, but not even for 100 grand would I be a garbage man in NYC, or any city, for that matter. wow, that sounds grumpy. I've been to NYC once in my life, was enough, but it scared me to death, so many citizens....I was scared there like they'd be in my woods. Sure takes all kinds to make a world. I'll stay tucked away in my wooded wonderland. Love from our piece of God's country., way up north of nowhere.

Yep, we had a 50 gallon drum but we didn't have much to throw in it. We canned a lot of our food in summer and we saved those jars to reuse. There were a few cans of pork and beans and other things, but We usually loaded our can on the back of our truck and took it to the local dump which was only a few miles away.
R

Which is better Pepsi or Coca-Cola?
ANSWER THE POLL and you could get a prepaid VISA gift card!