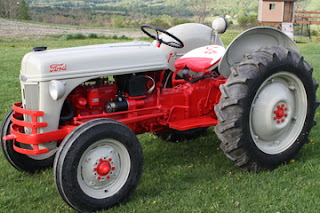 This is a restored 1947 Ford 8N Tractor, The first tractor I owned or drove was the 8N (Images from the net) 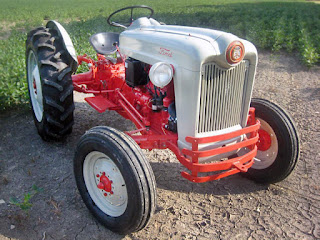 Above is the 1953 Ford Jubilee tractor 9N
I am glad I decided to do this entry. For some reason I thought the Jubilee was older than the 8N

For today:
In my childhood dad pastored a country church, so I lived in the country for 2-3 years. We had hogs and chickens. We were not on a farm, but my playmates were farmer’s kids. My Great Grandpa Hilley lived on a down in Georgia.

I said that to open this entry. You BLOGGERS are responsible for many of my entries. Something you write kicks in memories and my ‘thinker’ goes into overdrive. Some bloggers have lived on farms at one time or the other.

It seems Rick(Life101) is the closest thing to a farmer now. So this is his fault for posting a picture of an old rusty farming disc.

Many years ago when I quit building I gave my son a dump truck and an International tractor. He was a builder at the time.  Now both pieces of equipment sit in the woods with trees growing in and around them. Last summer he wanted to know if I thought they would crank-up (that means start and run).  They actually started with just a little encouragement. Using only starting fluid and a battery they fired up.  They are still there; needing the carbs cleaned and new tires. Funny how good it made me feel to actually hear those engines running. It is not the same as someone being raised from the dead, but mechanically it looked like a miracle.

Standing there in the weeds, I remembered the truck loaded with building material and that old red tractor with my NEW ‘rollover’ box scrape, landscaping a new home. I have never been a farmer but have owned several tractors, I loved them every one (‘cept the Oliver, which I only liked! LOL).

A tractor has a lot of POWER and amazingly the danger associated is FORGOTTEN at times. They were built to last; many 1940s tractors are working on farms today.

Nite Shipslog                        309
PS:Tractors can truly be dangerous. My uncle was killed on an 8N and an RV friend also died on one. Without an implement  attached behind their power can actually raise the front end up and over onto the driver. One must know and respect heavy equipment.
Posted by jack69 at 9:22 AM

People always remember things from their past if they are brought to them again - interesting you remember the sounds of your equipment and how it brought back memories.

Your 'olden' equipment endurance is sure a testament to quality! I know nuthin' about farm stuff -- but seems today's manufacturers are producing faster-but-cheaper product. One of my earliest/fondest memories was getting to 'drive' my grandpa's tractor. (While seated on his lap, that is.) You raise a good point about safety. In those pre-OSHA days, I'm not sure anyone ever talked about that.

That tractor brings back so many memories. When I was 8, my dad had me drive one slowly while he scooped corn out to feed the hogs. I was absolutely scared to death.

Dad had many tractors over the years: International Harvester and John Deere were the ones I remember best.

I love the photos of the old tractors.
I’m having my Daddy’s old tractor put back into running order. I have a photo of it when Daddy first bought it. He worked that tractor hard. He got a new tractor eventually and parked his original one.
I want to get the original one up and running...in memory of my dear sweet Daddy.
I miss him very much.
Thank you for sharing the photos of the tractors. They made my heart smile.....

My dad had a 50's Ferguson that my brother restored. It still runs and still works hard with it's shiny new paint job. Love that tractor and drove it many times raking hay. Our first tractor was an oldie too, a John Deere that I hated to drive with it's 2 small tires tight together in the front. I hated it because while raking with that one, the steering wheel lifted right off taking a turn...shut that one down quick. It coulda been bad. We now have a sweet mid-sized New Holland that's a true work horse year round. Thanks for bringing back tractor memories, thoughts of daddy on his especially. And yes, you must respect their power.
loven'hugs from up north where my dear pushed snow all morning again and it was wet and heavy. Thank God for tractors.

Grandpa never had a Tractor, we had a old single lung contraption that ran off gas to cut logs down into fire wood. When Grandpa got too old he shared off the Hay fields, 3 to 1, for every 3 bales they took he got one mowed away in the hay barn, The people came up to the Farm with 2 tractors, Ford's Grey and red, (Maybe an 8N) hauling hay wagons, next trip they came with a baler, never seen such a thing !!!! Modern Farming !!!! I did learn how to handle a Tractor and respect the Power Take Off on them !

I have always been fascinated with old tractors. We like to stop and look at the collection at an old farm museum on the way to the beach.

They sure made things built to last in the 1940s with the tractors if they are still being run today!

wonderful mememories, indeed. glad they started up, ready to be productive once more.

Glad you havae some great memories of that tractor, but it might have more value to someone who could use it instead of sitting there in the woods. I read somewhere that people are now buying up old tractors as the new ones aren't so easy to work on and fix yourself.