The HOBO lifestyle is returning… 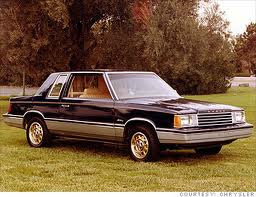 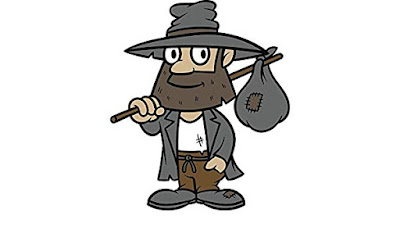 (Our view of the Hobo with his Bindle, all pictures from the net))

That title was a headline today. Most have never really known or understand the wayfaring person or Hobo. I actually knew of one. He was a wonderfully strange man. Elijah 'Lij' Howard:  farmer, husband and part-time hobo. He once gave me a Chow dog. I was visiting my sister when he gave me the dog.  Brother Elijah said, "I’ll bring him down when I come to Camp Meeting." He came in a brand new 1953 Buick. When the trunk was opened ‘Red’ had torn the cotton from the back seat, and ripped all the wiring out. Elijah just laughed, “The Buick people will fix it for me Jackie, don’t worry about it.” 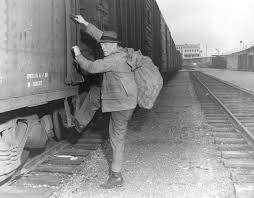 That night on the porch I learned a lot of Elijah’s life.  Elijah’s family farmed during the depression. He left making one less mouth to feed. He traveled the rails for a few years as a hobo; working odd jobs for food. The Hobo’s shared their food and when possible, they rode and slept in empty boxcars.

He returned home, the farm became his, he married and had a family, but the wanderlust never left him. He was well off, 'a very successful farmer.’ When the work load was light he would take off for a month at a time riding the rails. I sat wide-eyed, listening; I was 14-15 and already wanted to travel. Those stories just threw fuel on the fire. 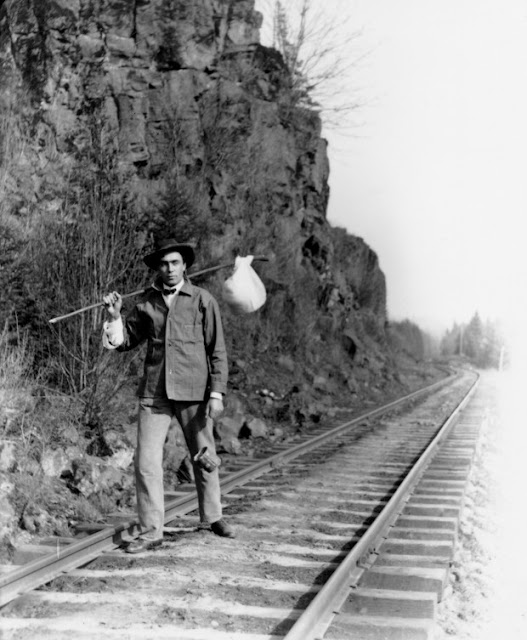 (Note the bow-tie and the swinging cup or pot)

I mentioned Elijah’s new Buick.  Dick said, “Let me tell you about that.”  It seems ‘lijah had bought a truck with an automatic transmission. Somehow he had ruined the transmission, forgetting it was an automatic he tried to shift gears and tore the tranny up, by shifting into reverse at about 25 mph.

When he was test driving the new Buick he related that to the salesman. “Mr Howard” said the salesman, “This Dyna-flow can switch to reverse at 35 mph and not bother the trans.!”

“If that is true friend, I will pay you cash for the car, hold on,” Elijah was on an empty road and with the salesman saying, no, no, he pulled it down to Reverse. The car jumped some and come to a stop and started backwards. Elijah bought the car. 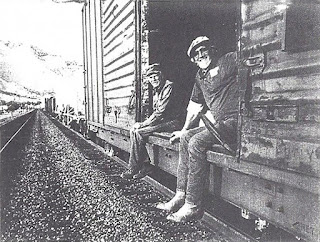 I loved Roger Miller’s “King of the Road.” When I hear it I think of “Elijah.”

And then there was Jimmie Rogers and "Waiting for a Train' singing "They put me off in Texas!" AND the singer "Boxcar Willie".
Hobo stuff was interesting but a tough life....

You know so many times we or I think that they are hobo's because they had no choice - but a lot of times that is not true- they have a different kind of spirit than others - I think you called it wanderlust.

I never knew a true hobo but this reminds me of what Mom always did for the kids graduating from high school. She'd make them a ' bundle on a stick ' as their gift. Not one of them has ever forgotten her generosity. When we were little and wanted to run away from home, mom would always offer to help us pack in her gentle voice. Again, not one of us went further than the corner of the driveway or the big rock by the pond. It's funny what brings back these fond memories. Thank You.
love n' hugs from up north where the wind is icy cold this morning but the sun is shining right through it.

How interesting you knew a real live hobo,, but really I thought you were the king of the Road.

Elijah was a lively character! I don't think I would tire of his stories! I mentioned it before but my mom's mom would feed hobos who came along during the depression. Not much, but something to sustain them til they found another kind soul.

You've captivated me! Not since my mother gave me and my little friends (ca. 1958) a 'hobo' party, did I give them much thought. Unlike some of the mentally-unbalanced homeless population, Elijah sounds like a good person at home on the road.

That's something else about the car salesman having to eat his words!

My grandpa rode the train while my dad was young.
Grandpa would hop a train, and ride. When he got hungry, he’d do odd jobs and earn entomeat a buy whiskey and be back on the rails.

I do not think I have ever seen a real hobo in my time. I’m thinking gypsies or Hippies would be equivalent. Not sure. I’m thinking a hobo was a choice made. I could be wrong.
Interesting story.

i love trains. one of my favorite songs was Roger Miller’s “King of the Road." this was an interesting post.