I am dead, Now what?

1955 Dodge, Yep I would like to drive around on a Sunday afternoon in that.

For today:
I saw that title of a book going around on the internet publishing sites. At first I thought it was a weird novel, and then I thought it is probably a self-help ‘planner’, where you can centralize all your planning for the ultimate move. 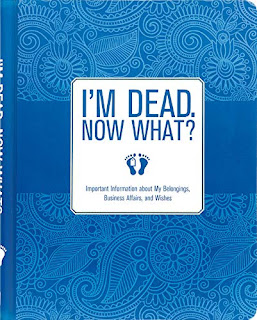 I did finally search for the book and found it is just that.  You do not necessarily need a book, but you do need to centralize your desires and information. A few years ago my sister Shirley was involved in handling matters after several deaths
I received letters and later e-mails. JACKIE, WRITE YOUR OBITUARY!  I actually did. Her reasoning was at the funeral home there is a lot of required information needed to form a simple obit. I have learned since, that MUCH more planning is needed. The coffin itself should be picked or at least a $ amount you would prefer spent left as a guide line.  At the time of death of a MOTHER, families want the BEST for mama. Unless some restraints are used some folk spend more than they can actually afford. In our neck of the woods a simple funeral will be near $10,000.
I heard a man say at the death of his dad, “Daddy thought he was going to live forever, he should have done something about his death plans.” (I really wanted to ask him, when do you plan to die?)  The father had planned, it was just that his wife was so distraught; she could not remember where the info was at that moment.

I was shocked at my sister Shirley’s last request when I opened it. After all her getting in my case, she had torn up her obit. She did not want one. However I wasn’t left in the dark she had everything in writing, and ORDERED me to do certain things. She had planned.
Due to cost and space, many people opt for cremation. My wife will not hear of that.  I want to be buried at sea, she won’t hear of that either. So Imma feed the worms. I would rather feed fish. LOL
In our family files we have a ‘DEATH FILE’. I do need to check and see if it needs an update and remind the boys where the information is. This is a serious subject, and should be addressed to assist those who are hurting.  You can be sure, they will appreciate it.
Nite Shipslog
PS: NO! I am not concerned that it is imminent! ;-)

We all never know when our last day is coming, but I agree it is bess to be prepared. I'd rather be cremated and have let my family know that.They aren't happy about it, but it is much cheaper than a coffin. I figure we go from ashes to ashes anyway. It's best to get it all in writing so everyone is on the same page. No need for arguments about it that way. I haven't thought about writing an obit. But maybe it would be something to put on my list for the new year. We only have as many days left as the Good Lord deides.It not our choice to make.

Interesting Post, When I Pass all our arrangements are done, and we Paid for them, Obit is written, Military Papers filed with Funeral Home and my Local Legion. Our Lot is bought and Head stone foundation poured, We have our Urns picked for our Ashes ! We get a check every Year from our Funeral Account as the Interest on a Pre Paid Account is rather large, We each get a yearly check. Neither My Honey nor I am in a hurry to use the Plans we made !

We are in the process of getting our paperwork together; have met with the lawyer to plan it all out now have to make some final decisions about this or that (which can always be changed but something has to start being put in writing). The best thing we can do is do this. It is hard with some of the things we have to work through, but as the lawyer said once we get it done we'll feel a lot better about it, knowing that it is done.

Great post, Jack. Unlike my mother, I've no burial policy or pre-paid arrangements. During my 6-week stint at the funeral home, I was AMAZED at the cost of even a bare-bones funeral. Yep, your $10 figure is spot-on. Like my son and DIL, Tom and I want to be cremated. Now, I just need to put that in writing and seriously consider writing my obituary.

PS - I hope you're enjoying a very HAPPY BIRTHDAY!

If the kids of today wait to pay and arrange - the funeral is about 30K today. It is absurd! We are going to be cremated ourselves and have that planned out already. We do have our wishes known. Sandie

I’m glad that I don’t have to order flowers but this is stuff I should probably consider.

This is so fresh in our minds, having just fulfilled Bill's last uncle's wishes. He had everything done, right down to who he wanted to be readers at his funeral. Everything was prepaid so no work for the nieces n' nephews. He was cremated as he wished so that also was a done deal. I used to think planning such a thing as ones funeral, was a bit on the morbid side. I don't feel that way anymore. We have everything in writing but still need to find a plot for our final resting place. I hate to think of the kids worrying about it. Once again, Jack, you lay things out for us to all think about. It's important stuff.
loven'hugs from up north where it's STILL snowing. Snow, snow, go away.

when a good friend of ours passed away in his 60's, over 11 years ago... my husband and i bought a cemetary plot and a tombstone to go with it. we visit it often and put flowers om it during the holidays. figure nobody will do it after we're gone cause everbody lives out of state or are going to be. as for burial or cremation i can't decide which i'd prefer. frankly i don't like either option. at one point years ago i wanted to be mummified. don't know if anybody would do it. i agree everbody should write their own obit. simplifies things for those left behind who are grieving.