(Note: Lucy, Joe and Spunky are well. She has lost her Blog and don't know where to find it, computer glitch, I found her on Facebook)

I remember a wayfaring man,  Dugan. He stopped by our house at least once a year. Mama provided him a place to sleep and take a bath. He sold needles and threads, and she always bought some. Mama washed and hung his clothes out to dry.
He told me he slept in the woods most of the time, and was happy when folks allowed him a place to sleep and eat.   I liked Dugan. He had a lot of tales to tell, and I am sure I sat wide eyed.
I said to daddy once, when were alone in the car, that Dugan was a bum. “No Son, Dugan is a throw back to many years ago when men made their way as ‘WAYFARERS’, the practice is most gone and you are witnessing history. Dugan is a figure of history. The ‘wayfaring man worked as he traveled, Dugan does work at farm houses, along with selling needles and pins to the ladies along the way.”
There was ‘Woolly’, or that is what daddy called him.  Woolly had a giant bushy beard and long bushy hair, he looked wild to a 6 year old. In 1949 men did not have long hair.  Anyway I was in the back seat of the  1948 Chevrolet, when Woolley got in. I squeezed as close to the other side as I could.  later dad told me Woolley was one of a group of folks in the country who called themselves ‘Israelites’, and I think Woolley was a Nasserite who did not believe in cutting his hair.
Then there was ‘Blue’. I met him in 1946, I was in the 2nd grade and he must have been in his 20’s. He was a light shade of blue. He was an avid reader and a person who studied scripture. He was a gentle person and lived about a block from the parsonage,where we lived. He attended our church.
His fingernails were a darker blue than his body, mama said it was something to do with how his heart was made, it did not process  blood properly. He was not an invalid, but he knew he would not live long, I remember his  funeral.
People I knew just in passing: 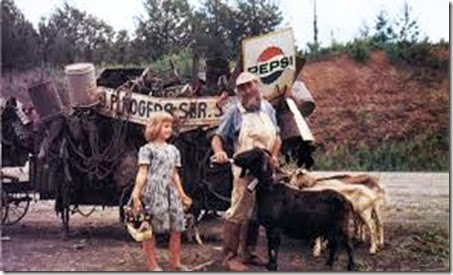 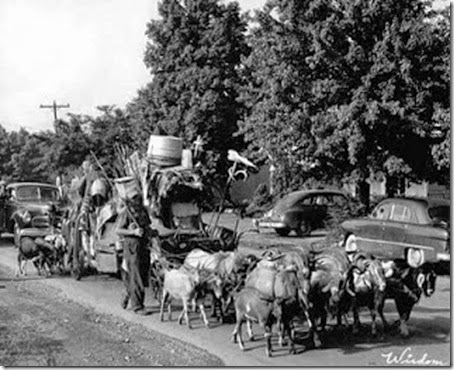 The ‘Goat Man’, I have mentioned him before. He drove a wagon pulled by 8 to 12 goats. He picked up stuff along the roads and his wagons were covered with hub caps and other junk he had found and would sell. That was along with goat’s milk. When he was passing any area where we lived, Daddy always drove us out to see, “The Goat Man”, I loved it. I wanted to live in a covered wagon and cook over a camp fire. 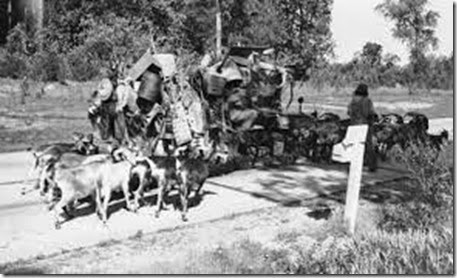 Some folk are hard to forget.
Nite Shipslog
PS: How did this happen? Would the Insurance man believe it? 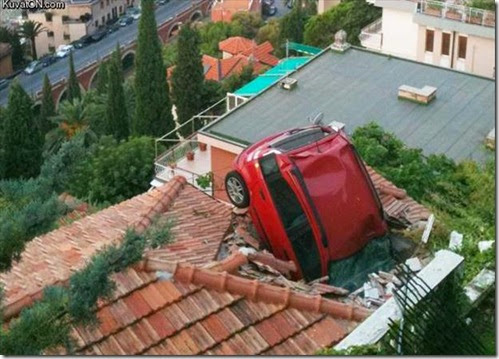 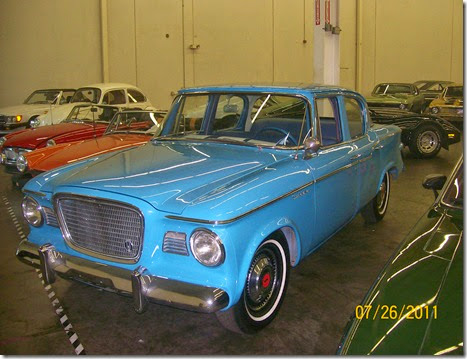 The Lark, lots of TV commercials about this car…
Posted by jack69 at 9:54 AM

On Wayfaring people. Dad and mom took their family to Florida from North Georgia during the depression by working at farms for food and sleeping in barns. They did washing, chopping wood, picking and scrubing. Anything to get a quarter for more gas for the A Model. Dad always said, if a man is willing to work he won't starve.

Interesting tales from the past today. It was a better time I think when people weren't afraid to offer a meal or a bed to folks off the road.I'm have to say I won't even open the door to someone I don't know. Hope your rain stopped. We have it now in Ohio and it looks like it'll be around awhile. Hope you both have a fantastic Friday. Forgot to say good to know about Lucy

Thanks for the info. on Lucy. I haven't seen her on Facebook in a while either. You've met some interesting people along the way.

I remember the goat man traveling
through. I forgot about Dougan.
The boy that was blue they said
it was called Blue Babies. That is the only time I have heard about Blue Babies.

We sure have met some characters
growing up.Mother always fed
people who was traveling.

How interesting with Dugan; the stories indeed I am sure he could tell! Nowadays this type of business/behavior would be frowned on, but it worked perfectly back then for him to do his odd jobs and sell needles and pins and kind folk like your mother putting him up while he traveled through.

I always have thought wayfaring people were interesting and had great adventures. THANK you for updating us on LUCY. I don't do Facebook, so please tell her TaryTerre said hello to her, Spunky and Joe. Miss her.

Glad to hear Lucy is well!

Your snapshots of Dugan, Wooley, Blue and the Goat Man captivated me, and I can't help but wonder whatever became of Dugan. In these days of Facebook, PIPL and zabasearch (etc.) it's practically impossible to misplace someone. Then again, do you suppose the wayfarers may have preferred that anonymity?

Glad you heard something about Lucy. Hope she finds it and comes back soon. I haven't seen her recently on Facebook either, thought maybe her computer had crashed. Hope you have dried out in Florida. Take care, Sheila