Waldo, Ever heard of the town?

Years ago when I first started going to Florida often I was warned by fishermen about the first stretch of US-301 in Florida.

Long before Interstates Folks from  from NC Who were real sports fishermen found the lakes around Leesburg, Florida. If you  could squeeze a Fri or Mon off you   could get in a day and a half of some of the best Bass fishing in the south. That meant you   had to drive as fast as you legally could to make the trip. 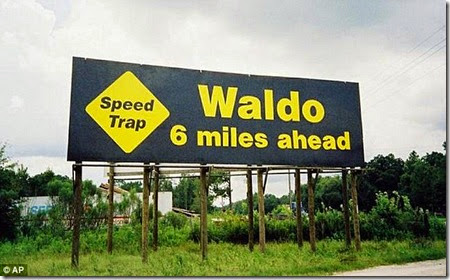 In that pursuit a lot of traffic  tickets were paid in the little town of WALDO, Florida.  Seeing GREEN another small town north of there, Lawtey, decided this wasn’t such a bad way to gain revenue. So two small towns whose population justified 1 to 2 policemen grew to 8-10 police cars & policemen.

AAA warned it’s members to be VERY careful in those two towns.  It finally got so bad that still today there are two big billboards leased by AAA warning of the speed traps.  The state has placed more warning signs of speed zones with notes STRICKLY enforced. I believe Sherry and I counted the speed signs and there were about 43 of them in the first 60 miles. 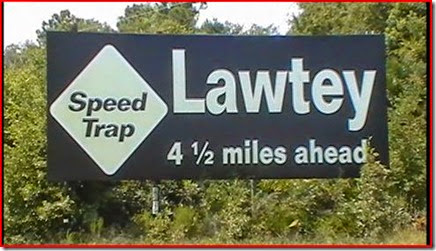 Drivers found them selves dropping from 55mph limit to 25 mph or less in 1/4 mile.

This has continues for over 50-60 years. Towns supported by traffic citations. BUT this week the news finally broke, after an investigation it was learned that WALDO chief of Police did in fact issue ticket quotas to his officers. Quotas are illegal.  Citations are to support enforcement and prevent accidents not pay salaries. 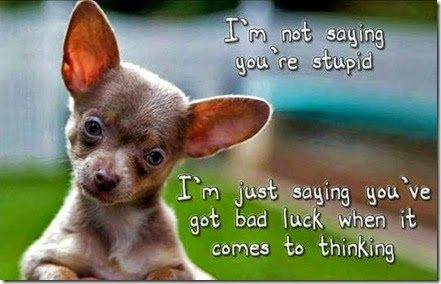 This weeks headlines read, “Waldo Police Department is Disbanded”, The county Sheriff’s department will be responsible for the enforcement.

Sherry and I never got a ticket, but we ALWAYS obeyed the speed limit thru there. We do have friends who have been ticketed there.

We live in a country where the police as a whole follow the “Protect and Serve” motto, but as my daddy said, “There is always that ten percent!”  I haven’t known but two police officers personally. Both were good people,  Claude Setzer and Elwin Davidson. We do have one great guy here in Bloggersville, The Old boomer http://oldboomerwoodys.blogspot.com/

Gary Wood the retired Badge holder, iffn I was betting, I would bet he was one of the good guys.


A blonde man was driving home, drunk as a skunk.

A cop car pulls him over; so, he tells the cop about all the trees in the road.

The cop says, "That's your air freshener swinging about!" 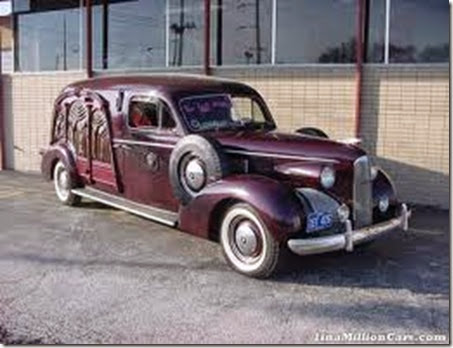 I liked this Packard Hearse.

Yes, like any other profession there are some bad ones. I am proud to say my husband was one of the good ones and now my daughter and son-in-law are good ones! I was happy to see that PD disbanned we have a couple more in our area that need to be!

I have heard that we better be
careful in Belmont..I try to
drive the speed limit but it is
a challenge...I have never had
a ticket and I consider myself
lucky.as Brother will say I have
a heavy foot...

I think it's shameful the police resort to quotas. Glad they finally caught the person responsible.

Like that blond tree joke. Boy! They sure work the street here where I got a ticket not long ago. I really have to be careful because the speed limit changes from 45 to 30 where people are used to driving faster,

LOL with the blond joke. At least there are warnings for the speed traps ahead. While I don't think quotas per se are given here, I do know there are several key areas where the police will write tickets (namely off my street is one of them) where it just makes you wonder if they are doing it to increase revenue. I'm glad finally the truth in Waldo came out!

I don't recall either Waldo or Lawtey ... but they sounds lots like Starke.
I'm no fan of speeding, and what they're doing sounds lots like entrapment - but then, I'm no attorney. Just glad that Sheriff got what he deserved!

Ohio has some of those little towns that are known as speed traps. The ones I know of also drop from 55 mph down to 35 or 25 quickly. I've never seen a Speed Trap sign though. I appreciate our policemen, but to profit from others mistakes is wrong. We've had a couple of warmer days but today the temps will be dropping. It's fall in Ohio so not unusual. Hope your Thursday is a great one!

So it is really illegal to have quotas - I have always wondered about it because you hear of it a lot.

There are spreed traps in this small towns for sure.